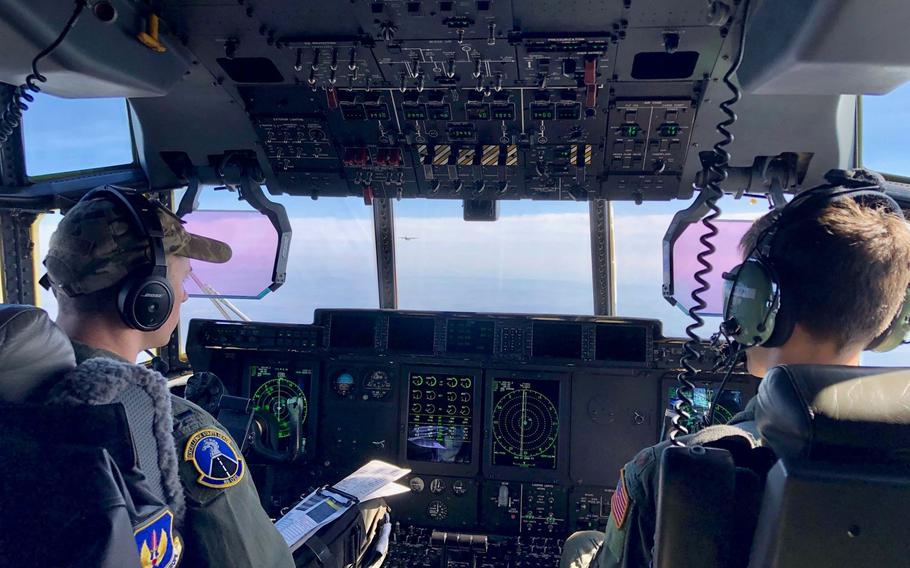 Lt. John Kornahrens and Maj. Erik Svendsen fly their C-130J back to Ramstein Air Base after a training flight involving a parachute drop at NATO's facility at Chievres, Belgium, on Thursday, March 26, 2020. The training involved "aggressive" low-level flying to simulate a combat drop. The Super Hercules is flying in formation with another C-130J from the 37th Airlift Squadron. (Slobodan Lekic/Stars and Stripes)

Lt. John Kornahrens and Maj. Erik Svendsen fly their C-130J back to Ramstein Air Base after a training flight involving a parachute drop at NATO's facility at Chievres, Belgium, on Thursday, March 26, 2020. The training involved "aggressive" low-level flying to simulate a combat drop. The Super Hercules is flying in formation with another C-130J from the 37th Airlift Squadron. (Slobodan Lekic/Stars and Stripes) 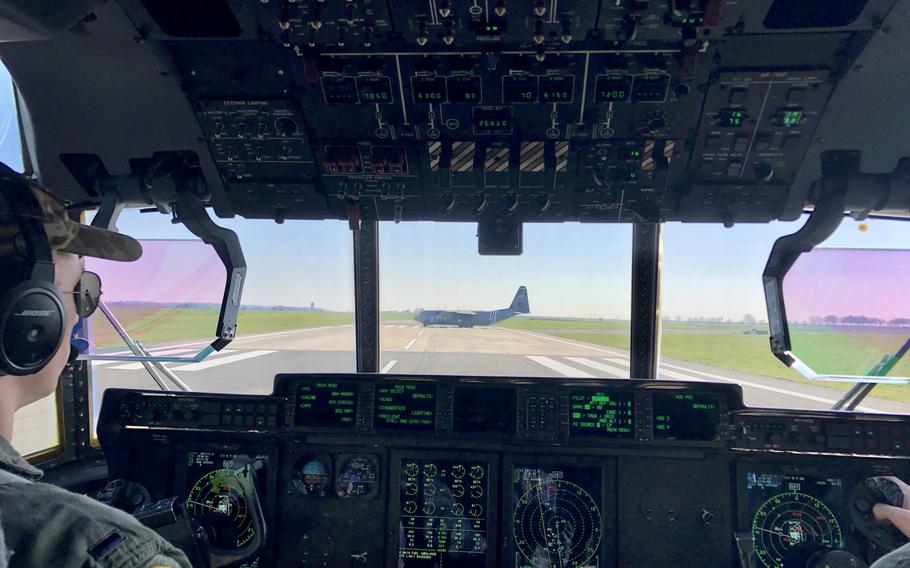 A C-130J from the 37th Airlift Squadron based at Ramstein, Germany, turns around after a formation on the runway of the NATO air base at Chievres, Belgium, in preparation for a training flight to drop supplies by parachute Thursday, March 26, 2020. The planes are painted with the same invasion stripes that the squadron's cargo planes wore when they dropped paratroopers during the D-Day invasion in June 1944. (Slobodan Lekic/Stars and Stripes) 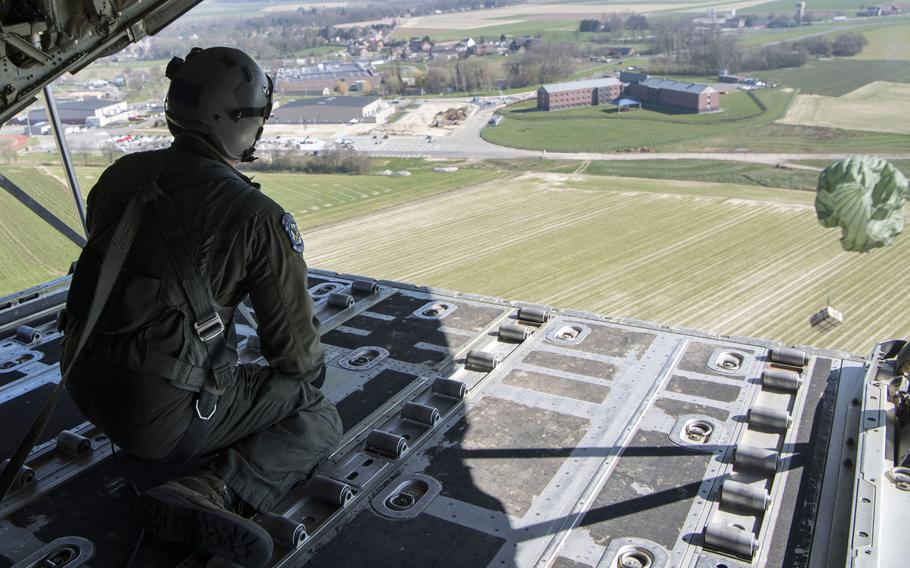 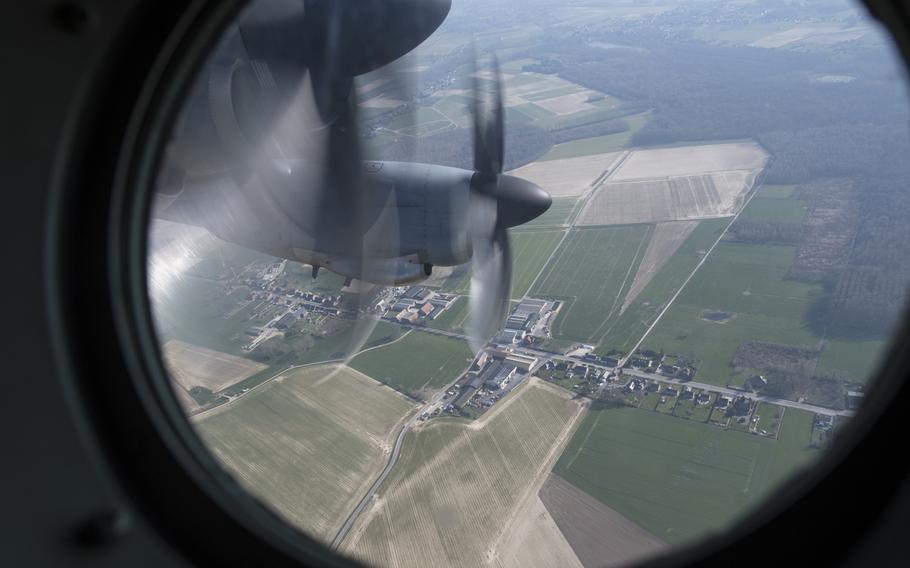 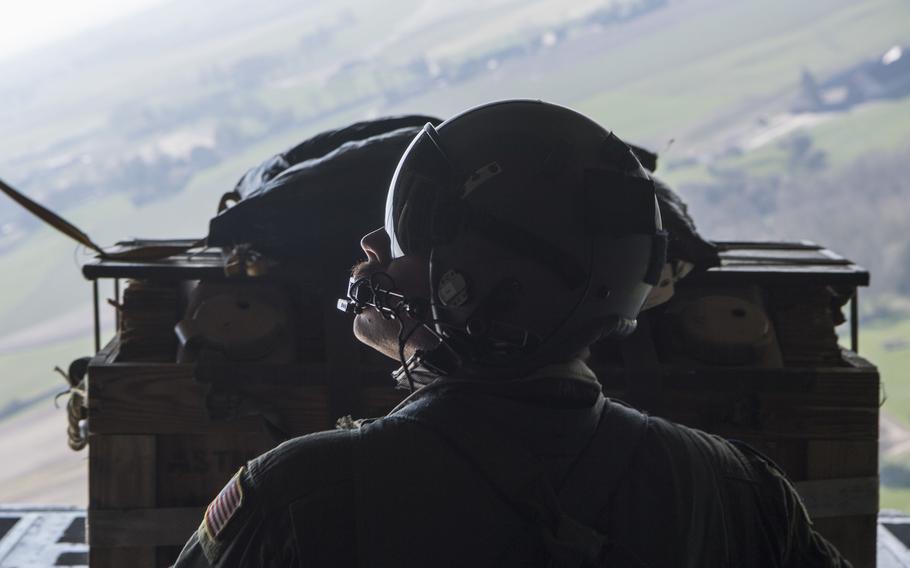 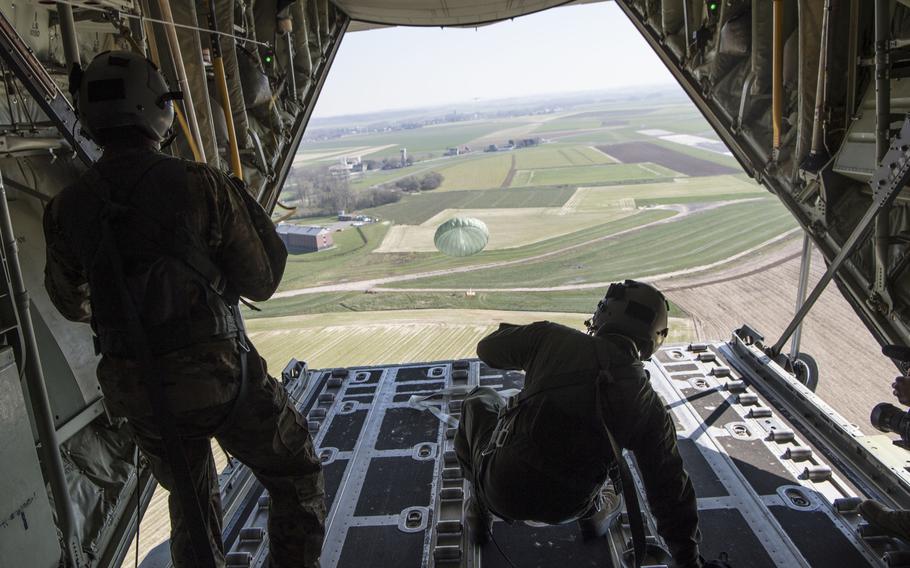 CHIEVRES, Belgium — “Herky 72” pulls a tight turn to the right and then rolls 60 degrees to the left as it nears the drop zone, as if avoiding ground fire.

On its final approach to the training area, where it will unload its cargo from the sky, the C-130J Super Hercules drops to just 300 feet above a disused airstrip with throttles pulled sharply back, suddenly slowing the transport.

In the cargo bay, the hinged rear door already has been lowered. When the pilot orders the drop, a loadmaster pulls the cord retaining the training pallet — loaded with water-filled containers — which rolls down the ramp, plunging into the void.

A parachute blossoms behind the pallet, seemingly stopping its fall in midair moments before touchdown at this NATO air base in Belgium.

Still simulating a combat mission during Thursday’s flight, the Super Hercules — call sign “Herky 72” and piloted by Maj. Erik Svendsen and Lt. John Kornahrens — made a tight turn climbing before leveling off. The loadmasters, Tech. Sgt. Alex Carlson and Staff Sgt. Brian Clark, closed up the ramp as the two-plane formation flew a racetrack pattern around the base, preparing for the next drop.

The planes, belonging to the 86th Airlift Wing’s 37th Airlift Squadron at Ramstein Air Base, have continued making regular forays to the zone for airdrops and other training despite limitations due to the COVID-19 epidemic.

The wing, which runs air bases in Germany, Portugal, Spain and Belgium and has facilities in several other European countries, has adjusted to each country’s regulations, said wing commander Brig. Gen. Mark R. August.

But the first concern is making sure the airmen and their families are protected from the pandemic, he said. This includes closing mass gatherings as well as gyms or libraries, August said in an interview.

Military personnel in Europe also generally have been told to limit their travel and to follow precautions like practicing social distancing and washing their hands for at least 20 seconds.

So far, there have been six confirmed COVID-19 cases among people who live or work at Ramstein, the base website said Friday.

“In some ways, this has definitely slowed down (operations),” August said. “But my air traffic control is open … maintenance of aircraft is open, hangars are open, my mission-oriented skill set is still open.”

As an airlift wing, the 86th must be prepared to respond not just to an adversary, but also to scenarios involving humanitarian assistance, disaster relief and deployment of medical supplies to various locations, he said.

“When it comes time of taking care of (our) mission, our nation is counting on us to continue to project air power to different regions on the earth,” August said.

Lt. Col. Gregory Kantz, commander of the 37th Airlift Squadron, said the training flight Thursday showed how the squadron intended to maintain its combat readiness despite the coronavirus-induced restrictions.

“In order to maintain our … proficiency to execute a wartime footing with a near-peer adversary, we have to do more aggressive flying,” Kantz said.

“Our primary focus has been to find ways to continue to train … while taking prudent precautions to avoid spreading this disease,” he said. “I think we’ve found a pretty good balance and we’re able to go do those things.”