Aircrews must prepare for the worst in icy arctic 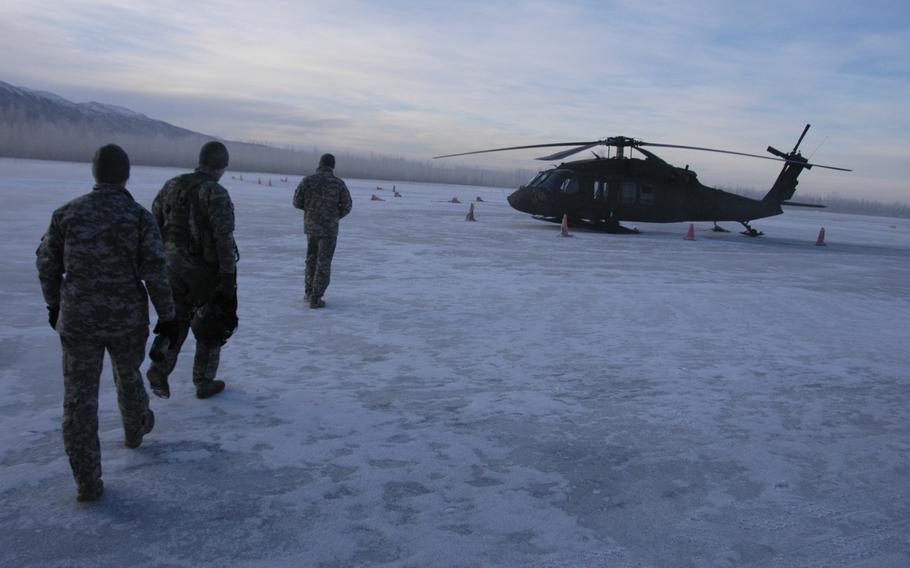 Buy Photo
Members of the Alaska Army National Guard prepare for an early morning mission out of Fort Richardson, Alaska on Feb. 13, 2015. (Seth Robson/Stars and Stripes)

Buy Photo
Members of the Alaska Army National Guard prepare for an early morning mission out of Fort Richardson, Alaska on Feb. 13, 2015. (Seth Robson/Stars and Stripes) 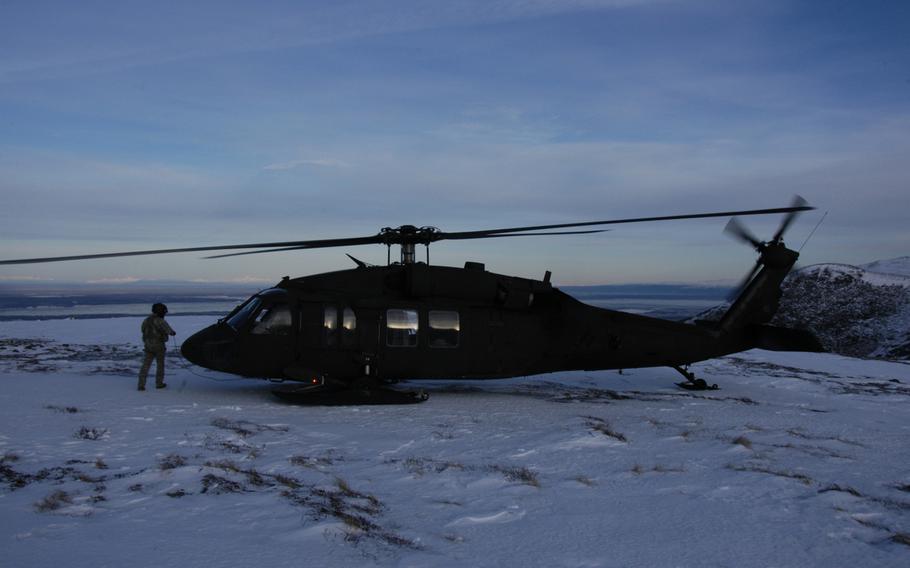 Buy Photo
An Alaska Army National Guard UH-60 Black Hawk helicopter prepares to take off from a mountain peak near Anchorage, Alaska, on Feb. 13, 2015. In a matter of minutes, aircraft here can fly beyond the reach of ground-based emergency assistance. (Seth Robson/Stars and Stripes) 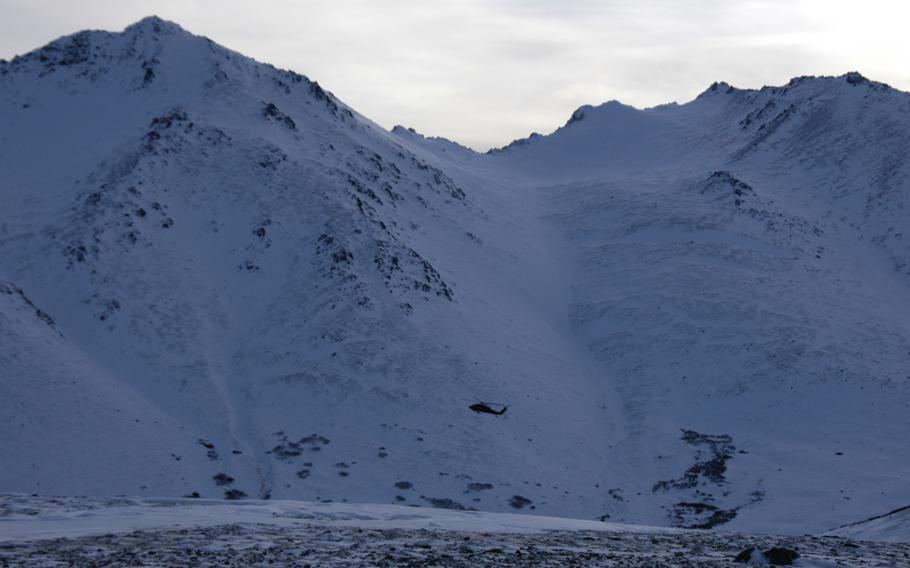 Buy Photo
An Alaska Army National Guard UH-60 Black Hawk helicopter is dwarfed by mountains near Anchorage, Alaska, on Feb. 13., 2015. It's essential that the chopper's crewmembers learn cold-weather survival skills in case they are forced to make an emergency landing. (Seth Robson/Stars and Stripes) 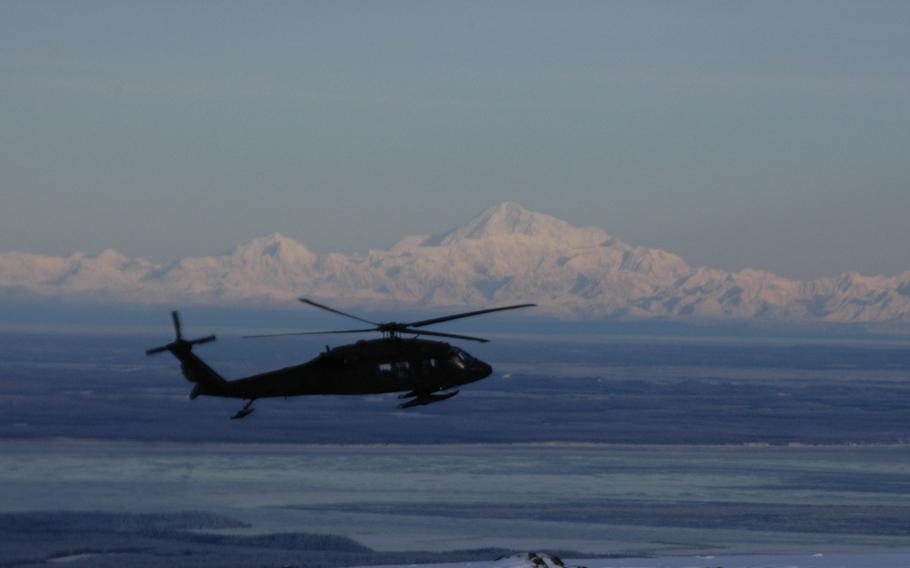 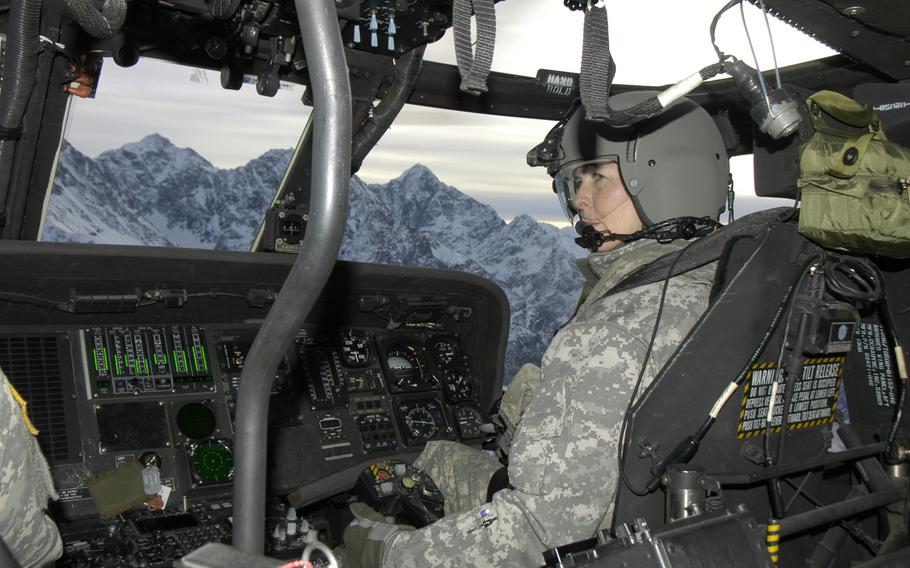 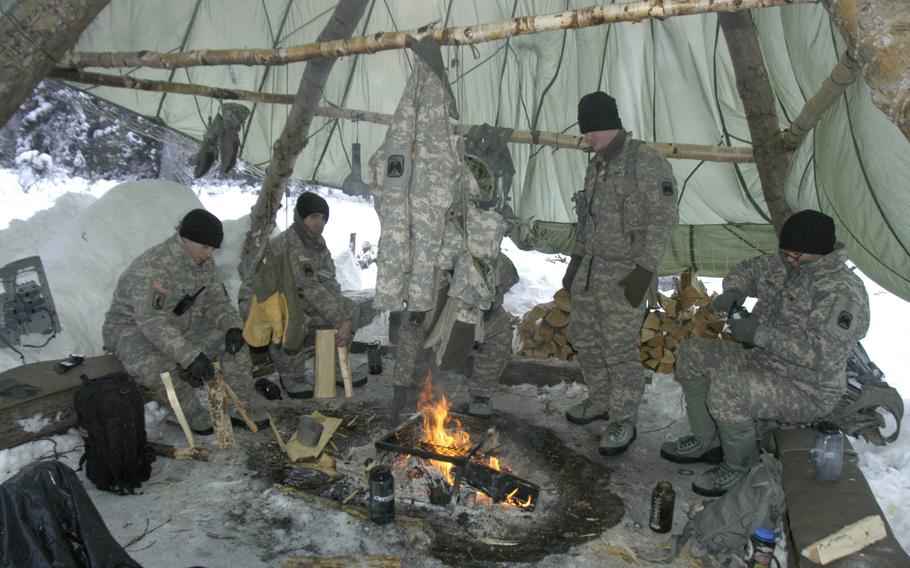 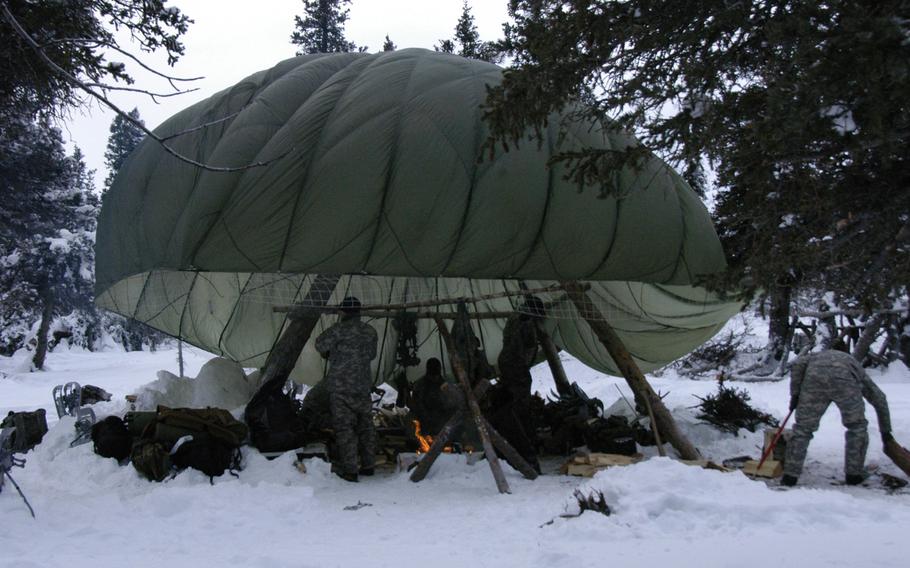 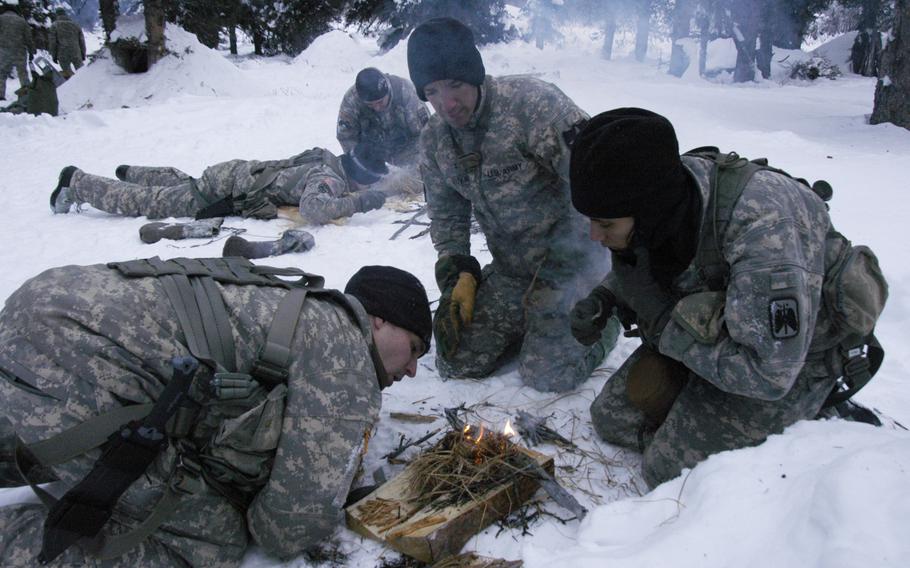 BLACK RAPIDS, Alaska — Mention the risk of dying in Alaska, and some people think of bears and wolves. Troops assigned to U.S. Army Alaska say they fear the brutal cold.

That’s especially true for flight crews, for whom surviving a forced landing is just the first step in staying alive in some of the world’s most inhospitable conditions: deep snow, howling winds, rough terrain, remote areas with no road access and temperatures that regularly hit 50 degrees below zero in winter.

“You can be 10 miles from our airfield (Fort Richardson), and if you have an issue with the aircraft and get stranded, you better have the right survival gear,” said Chief Warrant Officer 4 Mike Edwards, 39, an Alaska Army National Guard UH-60 Black Hawk helicopter pilot.

“You are not going to walk out of Alaska,” said Alaska Air National Guard Maj. Keenan Zerke, 39, of Anchorage, who works at a rescue coordination center on Elmendorf Air Force Base.

One of the instructors, Chief Warrant Officer 4 Dean Starr, 38, said it only takes a few hours for sub-zero temperatures to affect the crew on a downed aircraft.

“If the weather goes bad and you have to land and they can’t launch (rescue) aircraft, you could be on the ground for quite a while,” he said. “If it’s a blizzard, it could be 36 hours.”

On any given day, aviators assigned to U.S. Army Alaska can find themselves flying over a vast wilderness where mountain ranges and unpredictable weather make rescue of downed aircraft a challenge with its own dangers.

Alaska lacks extensive road networks common in the lower 48 states, so aircraft are often the quickest way to get around. But the harsh conditions mean the state has more than its share of plane crashes. One-third of commuter and air taxi crashes in the United States occur in Alaska, as well as about 20 percent of the fatal crashes and deaths, according to the Centers for Disease Control and Prevention.

“When I first got up here I was in awe. It’s the most beautiful place to fly in the world,” Edwards said. “It can also be the most challenging because there’s a lack of weather reporting and long distances between stations. Weather can be unpredictable and you need to make the right decision at the right time.”

In 2010, four U.S. Air Force crewmembers were killed when their C-17 took an unexpected turn and crashed outside of Elmendorf. That same year, an Air Force pilot was killed when his F-22 Raptor went down north of Anchorage.

The remains of some of the 52 servicemen killed when an Air Force C-124A Globemaster crashed on Mount Garrett — 40 miles east of Anchorage, en route to Korea on Nov. 22, 1952 — are still buried in the Colony Glacier. Bad weather stymied initial recovery efforts, and the plane was eventually swallowed by the snow and ice. It took until 2012 for movement of the glacier to churn parts of the wreckage and some remains to the surface.

During the survival training, Aviation Task Force members camped out in snow shelters at the base of Gunny 1, an impressive peak near Black Rapids.

Protected from wind chill by a grove of pine trees, they built log frames and covered them in snow to make shelters. They lined the floors with pine branches to form an insulating layer of air under rubber mats and poncho liners before huddling down for the night in sleeping bags. Temperatures inside the shelters were below freezing — but they were a lot warmer than the sub-zero conditions outside.

During the short winter days, the sun hugged the horizon and struggled to burn through an arctic mist as the troops waded through knee-deep snow to gather weapons for their war against the cold — twigs and dried grass found near the base of the trees. The kindling helped start fires to provide life-sustaining heat.

The aviators huddled together for warmth and comradeship around a large, comforting blaze under a parachute that kept snow flurries from their heads.

One of those sleeping rough was 1st Lt. Dan Sweeney, 25, of Hutchinson, Minn. Sweeney, a CH-47 Chinook helicopter pilot, said he and the other aviators doing the survival training learned to send smoke signals and call for help using satellite radios.

“They tell you to pack a survival ruck the first day you get here,” he said. “Doing this you realize just how ill prepared you are.”