Aircraft from around the world land at RAF Fairford's Air Tattoo 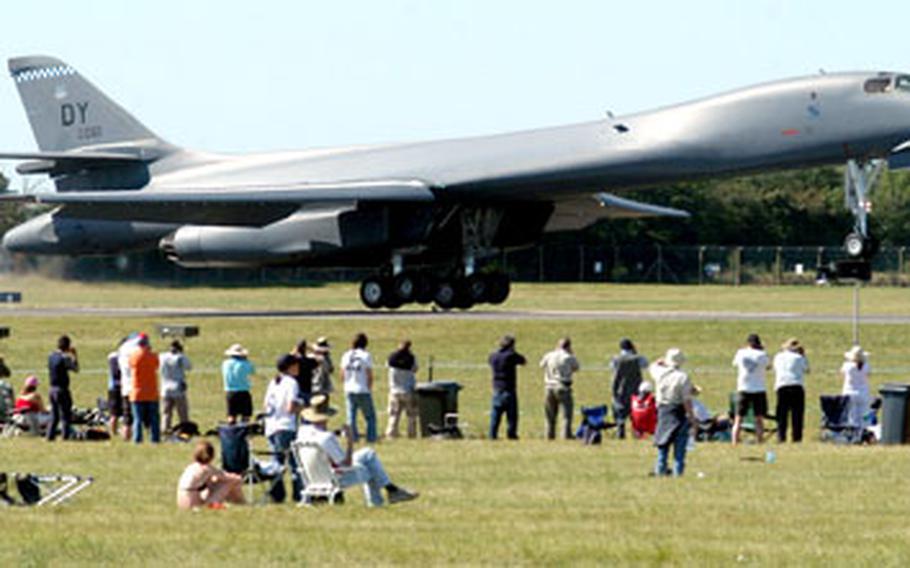 A B-1B Lancer lands in front of spectators gathered for the Royal International Air Tattoo at RAF Fairford. Hundreds of aircraft from around the world took part in the two-day air show, either through performances or static displays. (Sean Kimmons / S&S)

A B-1B Lancer lands in front of spectators gathered for the Royal International Air Tattoo at RAF Fairford. Hundreds of aircraft from around the world took part in the two-day air show, either through performances or static displays. (Sean Kimmons / S&S) 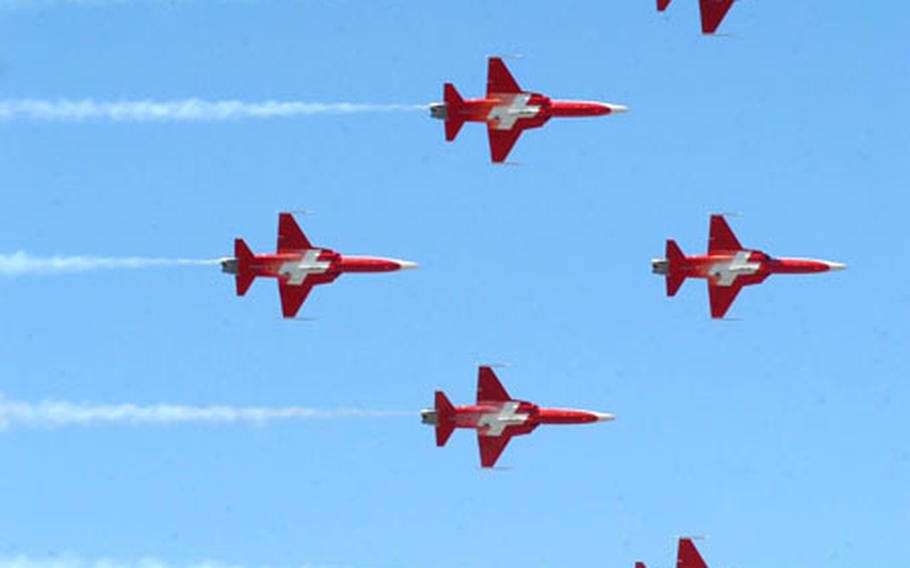 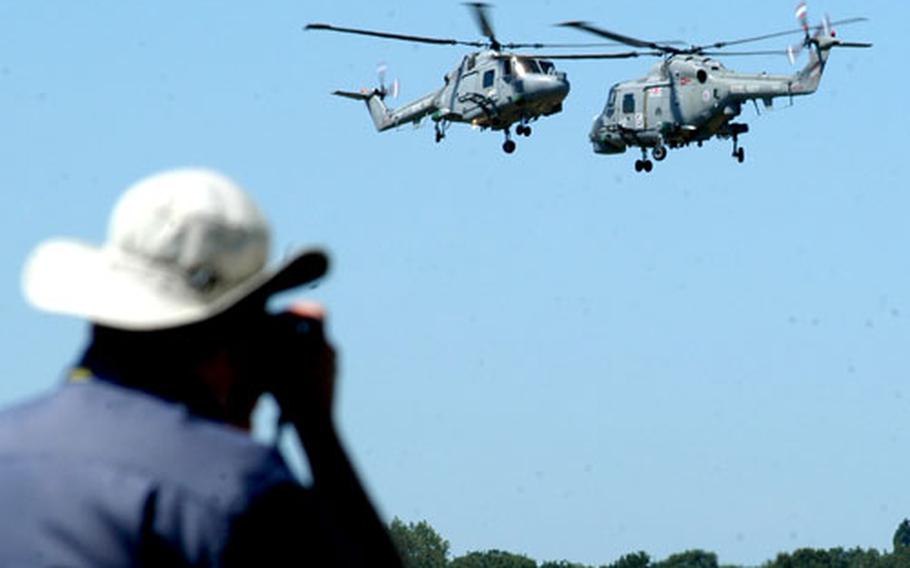 A photographer snaps a shot of two Lynx helicopters from the Royal Navy displaying their skills. (Sean Kimmons / S&S) 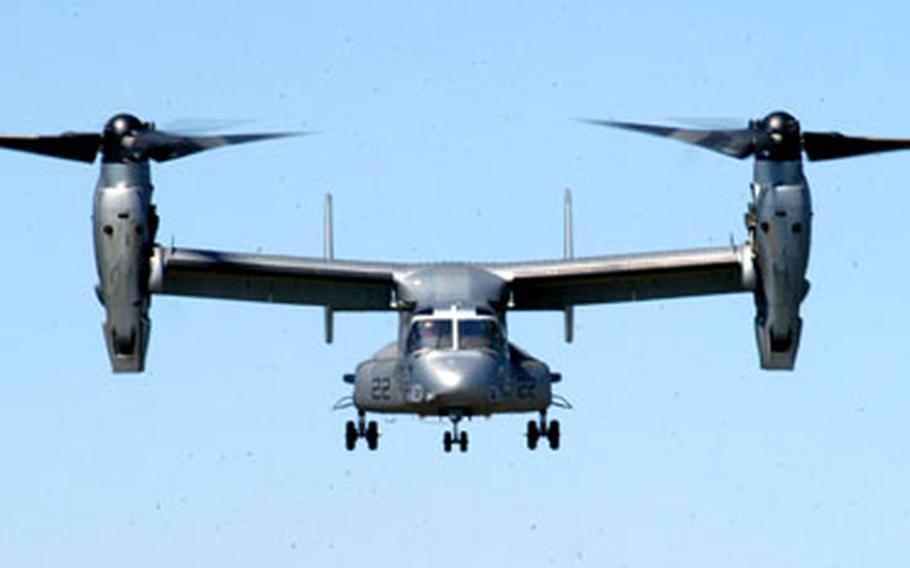 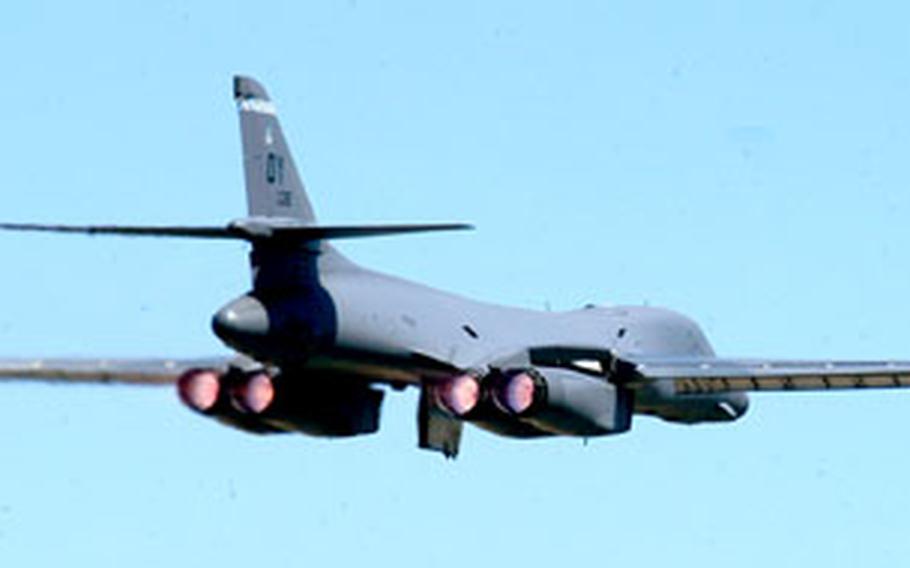 The afterburners of a B1-B Lancer glow as it takes off during the Royal International Air Tattoo. (Sean Kimmons / S&S)

RAF FAIRFORD &#8212; When the Russian-made MiG-29M stopped almost dead above the crowd at the Royal International Air Tattoo on Saturday, it seemed certain that it would behave like most objects at 300 feet in the air.

It should have shouldered over, nose down, and picked up speed in a rapid descent toward the airstrip at RAF Fairford, where more than 160,000 people were expected to attend the giant air show over the weekend.

But the MiG didn&#8217;t roll and plummet toward the Oxfordshire countryside. It somehow reaccelerated upward, flopped on its back in a 90-degree turn and roared away over the spectators, prompting heads to shake in astonishment.

It was a performance that encapsulated many of the highlights at this year&#8217;s show, which featured hundreds of aircraft from nations as far away as Turkey and Malaysia.

The theme for the show was &#8220;Rapid Global Effect &#8212; It&#8217;s a Speed Thing,&#8221; a topic embodied by the representatives from more than 20 countries who brought their sleekest and fastest aircraft to the event.

But though many demonstrated the very latest in ear-splitting velocity, a number of the show&#8217;s highlights came during the aircrafts&#8217; slowest moments.

Along with the MiG&#8217;s mid-air floating act and bravura stop-and-go displays by jets such as the Spanish Air Force&#8217;s Eurofighter Typhoon F2 and the French Dassault Mirage 2000C delta wing, the lumbering MV-22B Osprey was a head-turner, spectators said.

The U.S. Marines&#8217; curious, half-helicopter, half-prop plane lifted almost vertically off the Fairford airstrip under the wash of its dual tilt-rotor engines, and kept many in the crowd transfixed as it spun the props 90 degrees in mid-air and turned itself into a plane.

It also later tilted them back to vertical and flew sideways in front of the crowd, crab-crawling under its massive, thumping blades.

The Osprey was one of several aircraft making its debut at the show Saturday, including a C-130B Hercules from the Pakistan air force, which flew in from Islamabad for the show.

The Pakistani plane displayed a specially painted tail section showing the Hercules delivering supplies to civilians stricken by the massive earthquake last year. The cargo aircraft was one of the few options the air force had to deliver aid to the victims after the catastrophe, said pilot Haseeb Gull.

&#8220;It is impossible to provide [aid] by the road,&#8221; he said. The Hercules was draped with a banner thanking the international community for aid in the recovery effort.

The atmosphere of international cooperation was tempered by a note of concern and caution after a British Harrier GR9 jet crashed on a rural road on its way to the show Thursday. The pilot managed to eject before impact but was hospitalized for injuries, and no civilians were hurt in the crash, according to local media reports. The cause of the crash had not been revealed by Saturday.

The near-miss did little to dampen the spirit of the crowd, which reveled in the carnival-like atmosphere of the massive air show. The show spread itself along the 10,000-foot length of the Fairford runway under clear skies and high temperatures over the weekend.

The MiG, the Osprey and the Royal Air Force Aerobatic Team, the Red Arrows, often were cited by spectators as their favorites.

His friend, 13-year-old David Stanley, added that he&#8217;d seen enough at his first air tattoo to warrant a return visit.