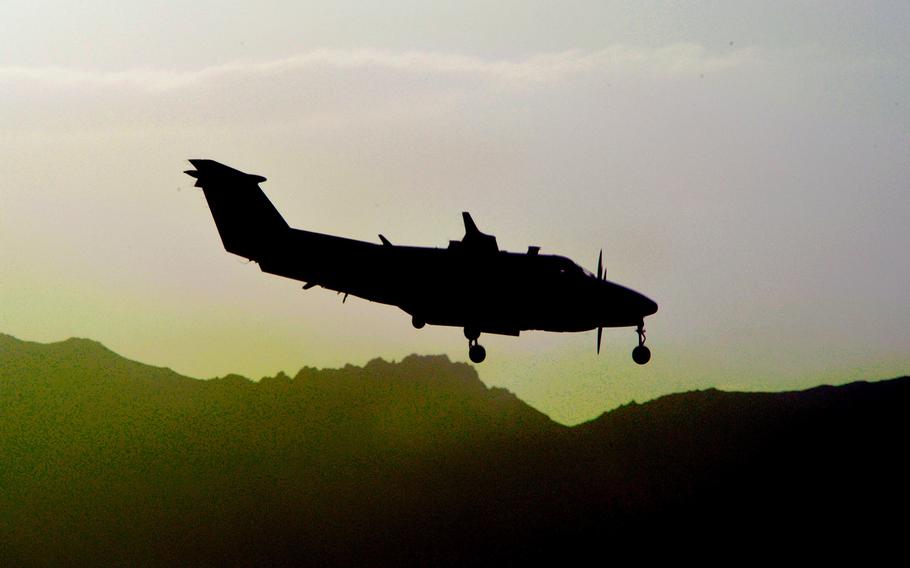 An MC-12 prepares to land at Bagram Air Field, Afghanistan, on Aug. 14, 2013. According to an ABC News report citing an unnamed defense official, an MC-12 crashed in Afghanistan on Friday killing three on board. (Stephenie Wade/U.S. Air Force)

KABUL — An air accident in eastern Afghanistan Friday claimed the lives of two coalition servicemembers and a civilian working with the military, the NATO-led International Security Assistance Force said.

The ISAF statement did not contain further details of what it termed an “aircraft mishap,” including the aircraft type, cause of the crash, or the nationality of the victims.

In Washington, ABC News reported that the plane involved was an MC-12 twin-turboprop reconnaissance aircraft flying a nighttime mission. Citing an unnamed defense official, the network said all three victims were Americans.

Accidents have caused the vast majority of the aircraft crashes in Afghanistan, and military helicopters belonging to the NATO-led coalition accounted for most of the overall losses. Helicopters are widely used in Afghanistan as inter-theater transports due to the threat posed by roadside bombs and land mines and because the mountainous country lacks modern roads.

In December, six American troops died when the Black Hawk helicopter they were in crashed in southern Afghanistan. One servicemember onboard survived.

In April, there was a series of crashes: A civilian cargo plane crashed in eastern Afghanistan, killing seven civilians; four airmen were killed in the crash of an MC-12 twin-turboprop aircraft, also in Shahjoi district; and on April 3, an F-16 fighter-bomber crashed about 10 miles south of Bagram Air Field, killing the pilot.

In March, two helicopters crashed within a week. The pilot of an OH-58 Kiowa helicopter died when the helicopter crashed in Kandahar province. A Black Hawk crashed outside Kandahar city, killing five U.S. servicemembers.

In all of those instances, the NATO-led coalition said no enemy activity was reported.

The crash on Friday comes on the heels of two deadly helicopter accidents in Virginia and England. On Tuesday, four Air Force airmen were killed when their HH-60G Pave Hawk crashed during a training mission on the east coast of England. And on Wednesday, a Navy MH-53 Sea Dragon crashed off the coast of Virginia — two crewmembers died from their injuries and a third is missing and presumed dead.