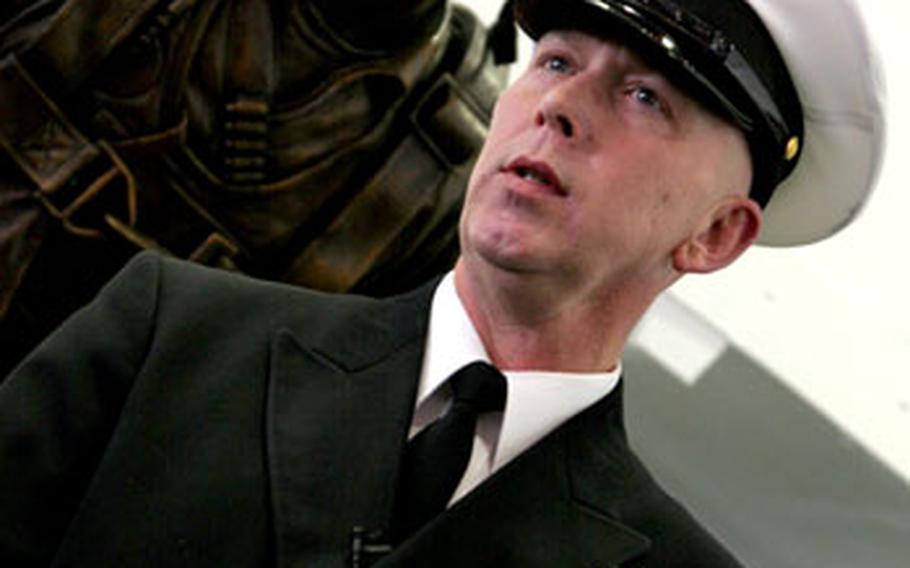 Command Master Chief J.D. Port said that with sea trials for the USS George H.W. Bush just a few weeks away, the thing he is most looking forward to is “The look on everyone’s face when they see what it’s like when a crew comes to life.” Here, Port stands in front of a scupture of the former president and ship&#39;s namesake as a naval aviator during World War II. (Kevin Baron / S&S)

RELATED STORY:President lands on carrier named after his father

NAVAL STATION NORFOLK, Va. &#8211; More than five years after the keel was laid, a rainbow of signal pennants, huge American flags and patriotic bunting adorned the fully-dressed and nearly-completed aircraft carrier USS George H.W. Bush on Friday, as thousands of crewmembers busily prepared the ship and its pier for Saturday&#8217;s commissioning ceremony featuring its namesake and his son, President George W. Bush.

With sea trials just weeks away, the crew of more than 5,000 who labored to get her ready were notably excited, and many said that after the speeches end and rows of white chairs are cleared, there was only one thing left to do: put to sea.

Reporters were escorted through several areas of the ship, from the crew quarters to the bridge. At each turn, officers and enlisted men and women proudly showed off their creation, designed and assembled plank-by-plank with Northrup Grumman-Norfolk shipbuilders.

The senior President Bush spent about four hours onboard the ship Thursday, and made a surprise appearance at the pier Friday afternoon for one more look.

The Bush, the tenth and final Nimitz-class aircraft carrier to be built, features several equipment and software upgrades and structural design changes, especially to the island, and more of its systems have gone digital.

Primary flight control, or &#8220;Pri-Fly&#8221;, where the air boss and mini-boss overlook the flight deck, is a bit roomier. The bridge windows are a bit larger. The mast is a little curvier.

But to most sailors, walking the decks of Bush will be reassuringly familiar. For now, the bridge will continue navigating the seas the old-fashioned way: by paper charts.

Senior Chief Petty Officer Perry Evans, from Chilton, Wisc., said the captain and the navigator typically will spend 18 to 20 hours a day in the pilot house. There, they will test out the latest navigational aid.

One of the most visible design changes is the larger island, the tower above the flight deck that contains several command centers. In addition to the Pri-Fly and bridge, there are now internal ladders throughout the island. The main mast pole has been tapered to enclose wiring and piping systems, and the aft mast has been repositioned to the island.

The ship also has improved systems to manage the movement of aircraft. Aircraft weapons elevators are positioned to emerge on the flight deck at the aft base of the island, rather than the center of the flight line. The catapult launch areas below have a new touch-screen system, allowing easier control of the catapult&#8217;s firing sequence. Each of the ship&#8217;s four catapults is like a double-barreled shotgun capable of reloading every three to five seconds to fire at rate of 160 knots.

Inside, the Carrier Command Approach room is dimly lit only by a new video display system that automatically integrates the tracking order of incoming aircraft with the status board. The system is still called &#8220;Mr. Hands,&#8221; from the days when a video camera aimed at cards on a blackboard would only show human hands moving around. But now it can be seen in all the ready rooms, the bridge, and flight deck control, which helps the skipper decide where to steer the ship.

&#8220;They have to know an incredible amount of information to make decisions up there,&#8221; said Ensign Dianna Morgan, from Danville, Ill., including the weight of each incoming aircraft so that the arresting gear on the flight deck can be set accordingly before each landing. &#8220;They only a have a minute to a minute-and-a-half in order to do all of this. It&#8217;s a very choreographed, very ... it takes a lot of teamwork.&#8221;

Each carrier contains a &#8220;tribute room&#8221; to its namesake, and the USS Bush&#8217;s is a true mini-museum, featuring dozens of memorabilia showcases of the president&#8217;s life and public service. On display are a flag from the vessel that pulled Bush from the Pacific Ocean during World War II, a marble ornament from Saddam Hussein&#8217;s palace, and the letter awarding Bush the Distinguished Flying Cross that was signed by Vice Adm. John S. McCain Jr., the father of Sen. John McCain, R-Ariz.

As the Bush closes out the Nimitz-class era, the room fittingly includes a World War II-era letter to home that the naval aviator wrote to his parents. It is symbolic of how daily life has changed in the Navy. On this ship, Petty Officer Amber Kitchens manages the computer network that allows more than 5,000 people to send emails home from the ship&#8217;s library, around the clock.

But morale already was high aboard the carrier on Friday. US Navy Seaman Alex McKelvey, 21, spent a year and nine months preparing the Bush for the duty. After all the hard work, the young aviation ordnanceman from Erie, Pa., said he is looking forward to seeing one thing: &#8220;Ports. I want to have fun.&#8221;

20stories tall above the waterline

21foot diameter of each propeller

30tons, weight of each propeller

90days of food and supplies to last at sea

325 feet, the distancein which two 3-in. wide arresting wires can stop an airplane flying 155 mph.

360lbs, weight of each link of anchor chain

1,092 feet in length, nearly as long as the Empire State Building is high

97,000 tons of displacement, when loaded