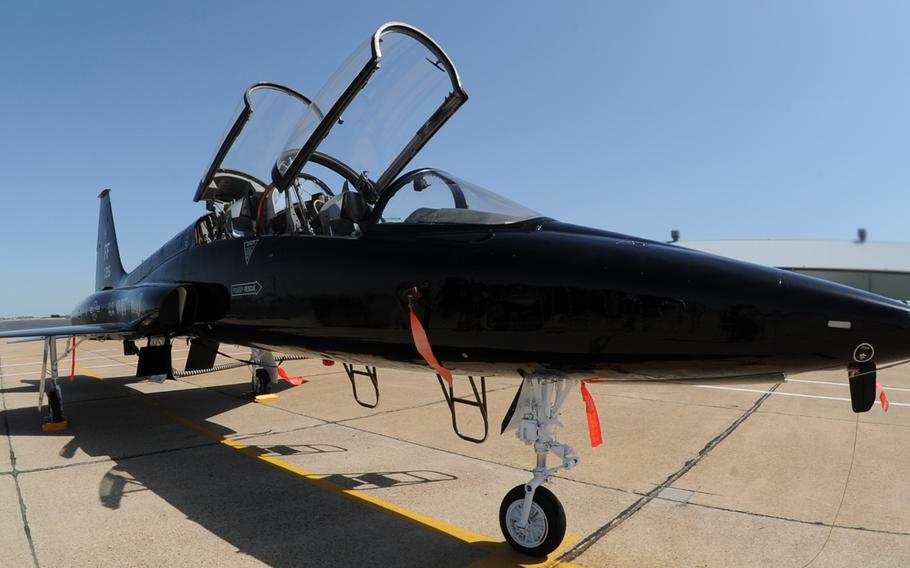 A T-38 Talon sits on the runway at Langley Air Force Base. A similar plane from Laughlin Air Force Base crashed on Monday, prompting base officials to ground aircraft through the Thanksgiving weekend. (Teresa Cleveland/U.S. Air Force)

WASHINGTON — An Air Force base in Texas has grounded its aircraft a day after a pilot was killed and another injured when one of the installation’s training jets crashed, Air Force officials said Tuesday.

Laughlin Air Force Base, located near Del Rio in southwest Texas, suspended all flying operations through the Thanksgiving weekend after a T-38 Talon training jet crashed Monday about 14 miles from the base, the Air Force announced in a statement. The cause of the crash is under investigation, according to the statement.

“Our community has suffered the irreplaceable loss of one of our pilots,” said Col. Charlie Velino, 47th Flying Training Wing commander. “The immediate concern is to provide support and love to his family, friends and colleagues. Our airmen and their families are incredibly important to us and our top priority. For now, we will focus inward to make sure that our base community rallies around those who are suffering and need our support.”

As of Tuesday, the Air Force had not named the pilot killed in the crash pending next of kin notification. It was not clear to what extent the other pilot was injured. Local news reports indicated the injured pilot ejected from the aircraft.

Laughlin is the Air Force’s largest pilot training base, where airmen learn to fly combat jets using the T-38s. The T-38 is a two-seat, twin-engine, supersonic jet that has been in use by the Air Force since the 1960s. The service aims to replace the trainer jets in the near future but has not named a replacement. With upgrades, most the Air Force’s T-38s are expected to last through 2020.

The Monday crash was the latest in a string of deadly military aviation mishaps in 2017. At least 34 servicemembers have been killed in 10 fatal aircraft crashes this year.