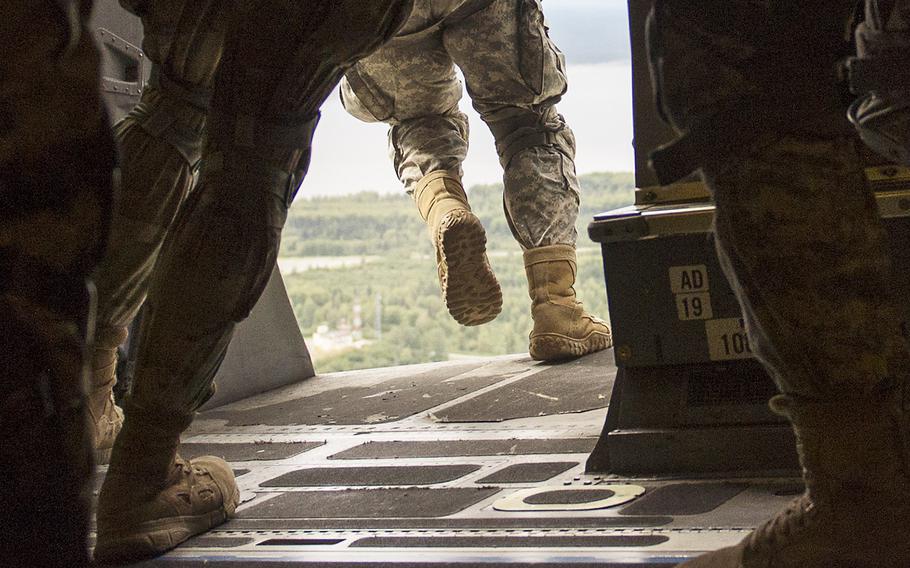 In a July, 2016 file photo, soldiers with the 4th Brigade Combat Team (Airborne), 25th Infantry Division conduct a training jump out of a C-17 Globemaster III in preparation for the Arctic Thunder Open House at Joint Base Elmendorf-Richardson, Alaska. (James Richardson/U.S. Air Force)

SAN ANTONIO -- About 1,500 soldiers from the 25th Infantry Division in Alaska are deploying to Afghanistan as part of a regular rotation as the war in that country continues its 16th year, the Army announced Friday.

The rotational deployment of less than half of the 4th Brigade Combat Team (Airborne), 25th Infantry Division for Operation Freedom’s Sentinel replaces another unit and does not signal an increase in troop levels, Army spokeswoman Maria Njoku said Friday.

Army Gen. John Nicholson, the top U.S. commander in Afghanistan, told the Senate Armed Services Committee in February that he needed a few thousand additional troops from the U.S. and NATO allies in order to undo significant gains by militants there. The U.S. troop level in Afghanistan is capped at 8,400 now.

Operation Enduring Freedom, the original Afghanistan mission launched following the 9/11 terrorist attacks, was reflagged Operation Freedom’s Sentinel in 2015 as U.S. forces transitioned to an advise and assist mission with Afghan troops and police in their ongoing counterterrorism campaign.

Alaska-based soldiers of the 25th Infantry Division will deploy to Afghanistan as the security picture there grows more complex. The Islamic State has metastasized in the country and the Taliban has retaken large swaths of strategic territory, including Sangin in Helmand Province last month.

“I’ve seen the influence of Russia of late, increased influence in terms of association and perhaps even supply to the Taliban,” Scaparrotti said.

Reports also surfaced last month of Chinese patrols inside Afghan territory near the narrow border of those countries, further complicating security considerations and signaling greater Chinese interests in the country, Stars and Stripes reported in March.

The Army also said Friday that 4th Brigade, 25th Infantry Division, the Pacific theater’s only airborne unit, will survive a 2015 decision to cut its strength by 2,600 soldiers and become a leaner airborne task force.

The decision was overturned following the 2017 National Defense Authorization Act that called for the Army to grow its end strength to 476,000 soldiers and take on emerging mission requirements, Army Alaska spokesman John Pennell said Friday. The final decision rests on congressional appropriation outlined in the NDAA, he said.