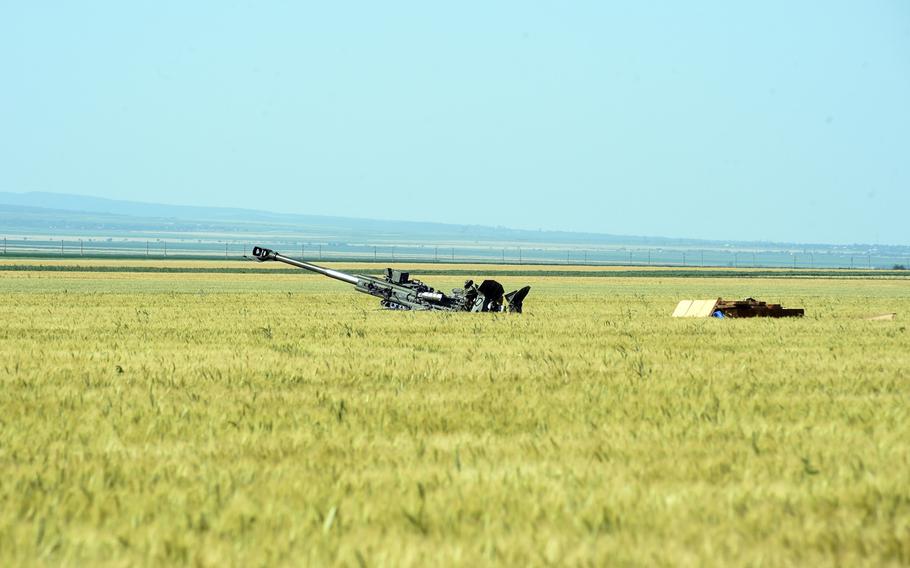 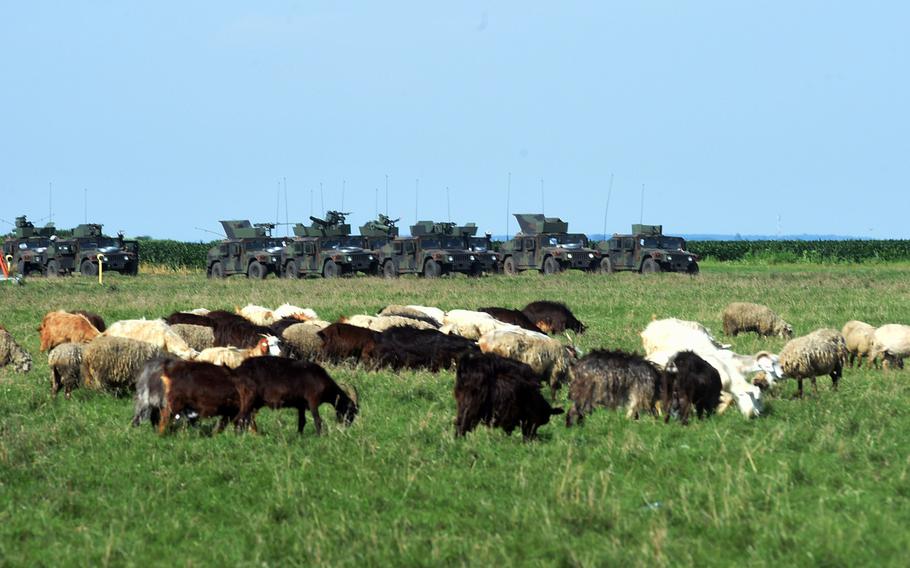 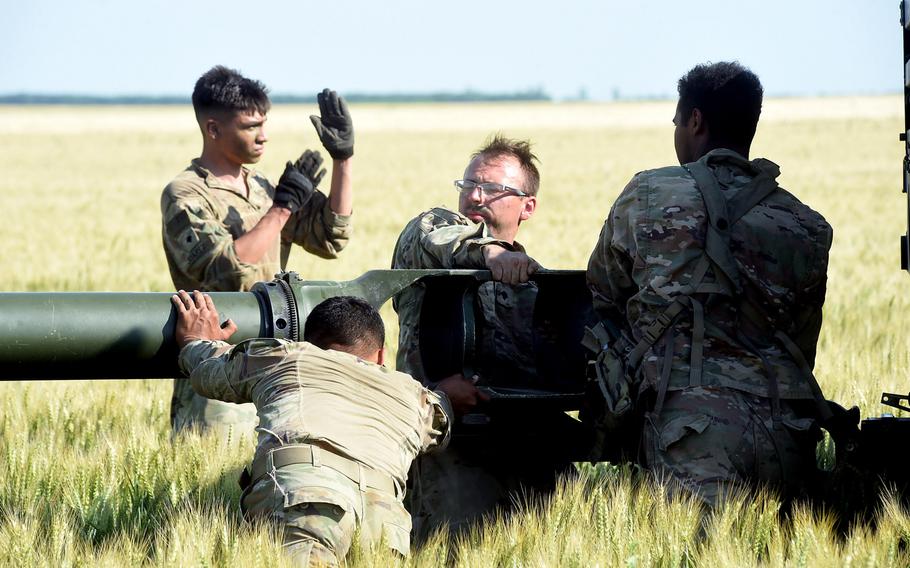 Spc. Per Werner, a medic with the Texas Army National Guard, left, hooks up an IV to Maj. Lee Kain, the operations officer for his unit, during Exercise Swift Response, Friday, June 14, 2019. (Martin Egnash/Stars and Stripes)

BOBOCU, Romania — The goats milling around the Humvees parked in a cornfield appeared unimpressed as Spc. Per Werner calmly stuck IV needles in soldiers’ arms on a blazing hot day in east-central Romania.

“You bleed a lot, sir. That’s the most blood I’ve ever had drop,” Werner, a combat medic with the Texas Army National Guard, told one of his patients as he treated a patient.

“It’s pretty hot outside, so we’re just doing some preventative maintenance, so nobody ends up as a heat [casualty],” Werner said, after parachuting into the area to treat both real and fake injuries as part of the multinational Swift Response exercise.

Werner was among more than 7,000 mostly airborne soldiers from eight NATO nations who “battled” through the Balkans in an exercise designed to test the U.S. Global Response Force, whose mission is to rapidly respond to unplanned crises. The nearly two-week exercise ended Tuesday.

The Global Response Force has long been an Army mission, but after 2001 it took a back seat to the wars in Iraq and Afghanistan. More recently, military leaders have renewed the mission’s focus.

“We’ve spent ... almost two decades training for counterinsurgency operations, but recent events have shown that there can be emergencies on the state level and region level that can happen quickly, and require a crisis response force,” said Lt. Col. Timothy Wright, whose 2nd Cavalry Regiment soldiers participated in the Romanian war games last week.

Russia’s annexation of Ukraine’s Crimean Peninsula in 2014 and the ongoing conflict with pro-Russian paramilitaries in eastern Ukraine “caught a lot of people by surprise,” and may have shown the world how important an emergency response force can be, he added.

To test out the Army’s ability to respond to a crisis in the Balkans, Swift Response created a scenario where NATO forces had to react to a “mixed-threat” enemy, armed with the small arms of a militia unit but also with larger vehicles and anti-aircraft guns of a regular military force, said U.S. Army Capt. Michael Lapadot, an intelligence officer with the 173rd Infantry Brigade Combat Team (Airborne).

The NATO forces parachuted into locations in Bulgaria, Croatia and Romania, beginning June 13. They fought back mock enemy attacks, often times in dense crop fields and under the watchful eyes of goats being led through the exercise area by astonished farmers.

Pfc. Eduardo Ortega, an artilleryman with the 173rd, spent most of that time firing his M777 155 mm howitzer at the “enemy,” played by U.S. and Romanian soldiers. He also pulled guard duty, hunkered down among the wheat stalks surrounding the guns.

Though he said the 90-plus degree heat definitely made life uncomfortable, he added that working in the wheat fields hasn’t been too bad.

“I love my job, and making these [howitzers] fire,” Ortega said.

Although Ortega and his crew were very busy throughout the exercise, its goal didn’t escape him.

“A war can happen at any time,” he said. “We need to be able to jump into a place, and be able to fight, whenever.”

The U.S.-led drills were even more important for the European participants, as they are more likely to be affected by a threat from outside of NATO, said German Lt. Col. Markus Hafner, commander of the multinational parachute task force during the training.

“I think it is very important to conduct exercises in Eastern Europe, both in the Black Sea Region as well as the Baltics,” Hafner said. “For the allies in these countries, it sends a strong message that the alliance is both willing and capable to fulfill its obligation and promise to each other to defend the alliance’s territory.”