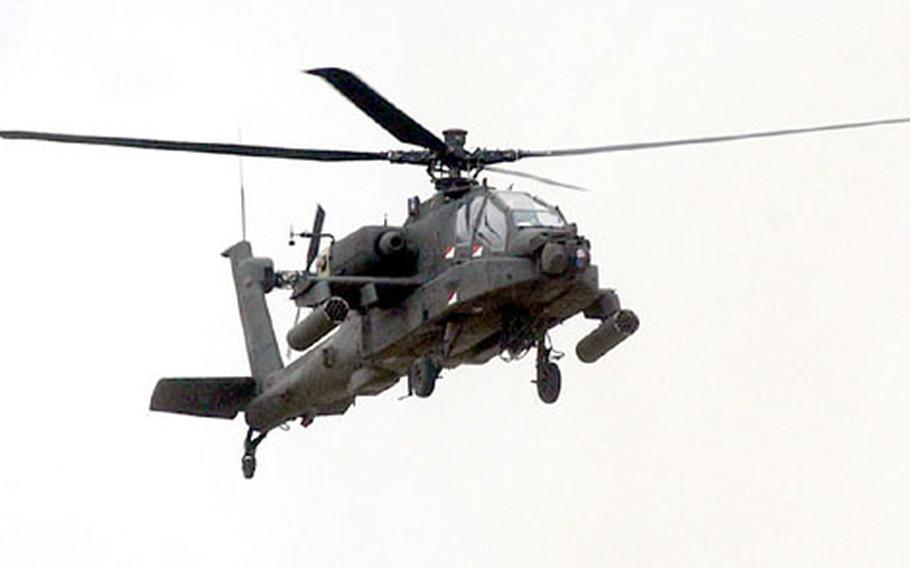 An AH-64 Apache Longbow comes in for a landing at Bagram Air Base following a mission. With Afghanistan’s mountainous terrain, the best way to move troops and equipment is through the air. (Michael Abrams / S&S)

An AH-64 Apache Longbow comes in for a landing at Bagram Air Base following a mission. With Afghanistan’s mountainous terrain, the best way to move troops and equipment is through the air. (Michael Abrams / S&S) 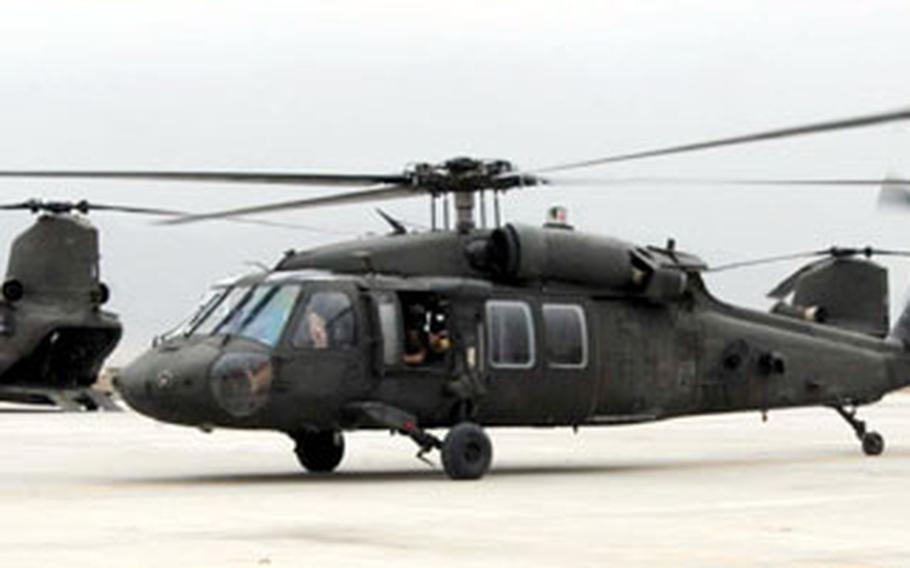 A UH-60 Black Hawk rolls past a line of CH-47 Chinooks at Bagram Air Base, Afghanistan, after a mission in this undated file photo. The helicopters of Task Force Sabre — Chinooks, Black Hawks and Apache Longbows — carry out many different missions over Afghanistan. (Michael Abrams/Stars and Stripes) 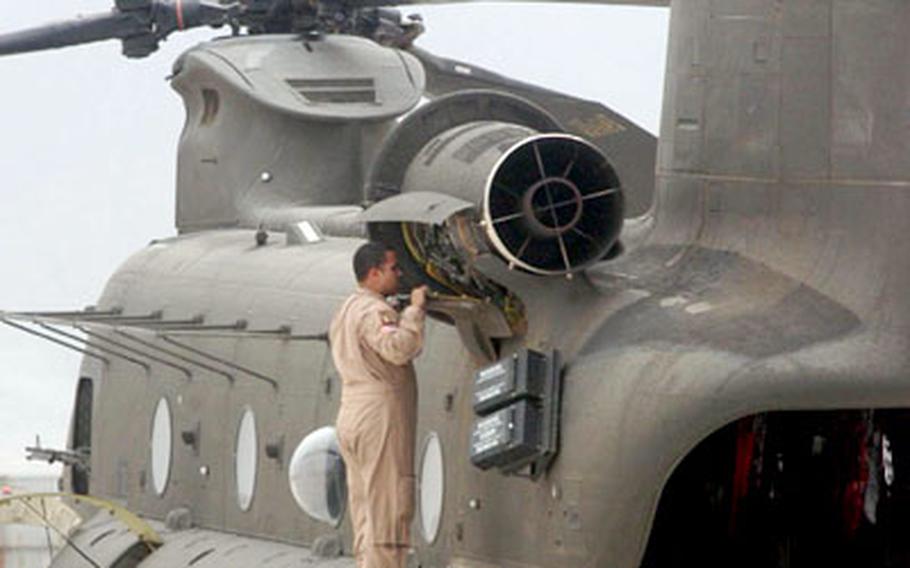 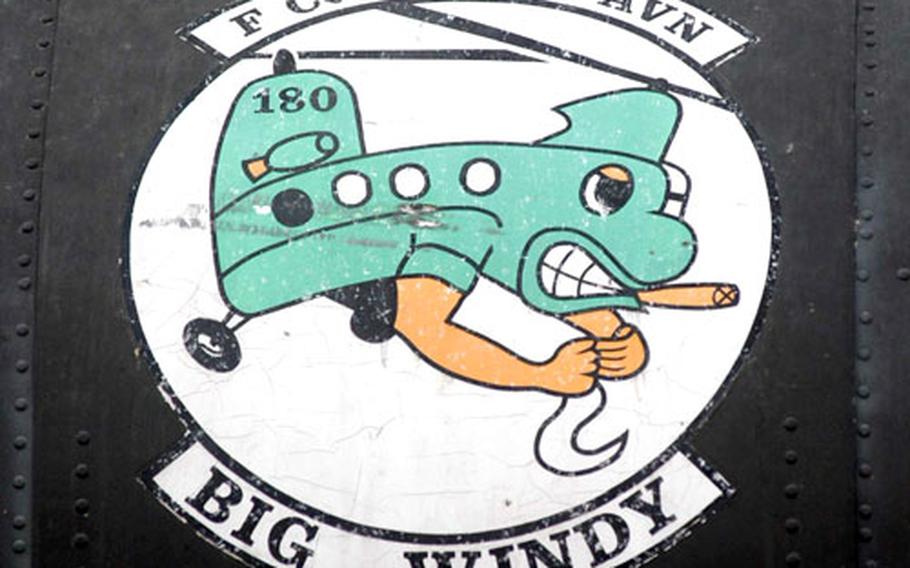 The "Big Windy" emblem on the nose of a Ch-47 Chinook helicopter at Bagram Air Base, Afghanistan. Assigned to Task Force Sabre, they are normally stationed in Giebelstadt, Germany. (Michael Abrams / S&S) 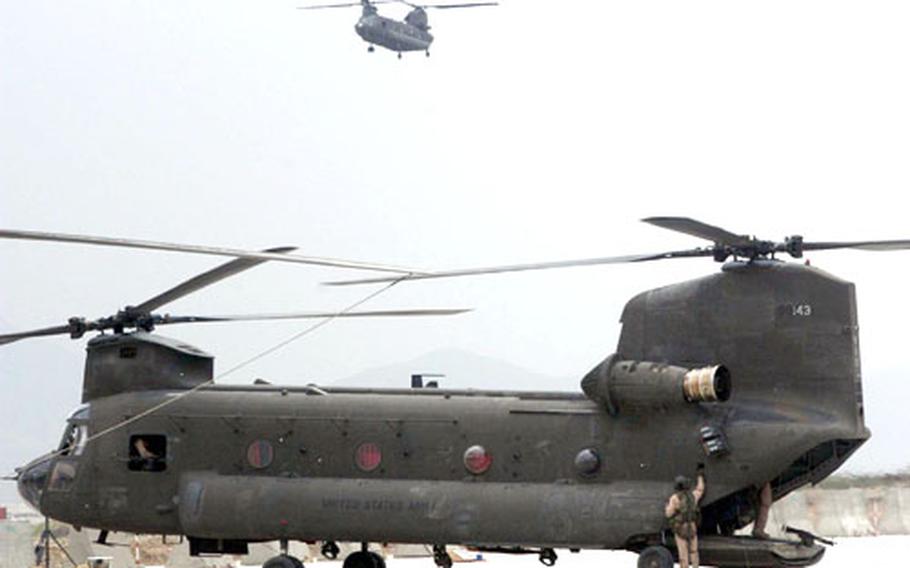 A CH-47 Chinook of Task Force Sabre comes in for a landing at Bagram Air Base, Afghanistan, as the crew of another Chinook prepares for the next mission. (Michael Abrams / S&S)

So, in spite of Wednesday&#8217;s CH-47 Chinook crash that killed at least 16 people, the 1,600 soldiers who make up Task Force Griffin, Task Force Sabre and Task Force Storm are going to be busy during their yearlong stints in country.

&#8220;We pretty much have helicopters in the air all the time,&#8221; said Maj. Matt Mingus, executive officer of Task Force Griffin, the headquarters element for Army aviation in the country. Col. Mark McKearn is set to take command of all Army helicopter assets in the country from the departing 25th Infantry Division by the end of the month.

The military has not given media the opportunity to talk to the units that suffered losses in the crash until after the victims&#8217; families have been notified. But Stars and Stripes talked to members of several Germany-based aviation units days before the crash occurred.

Task Force Sabre, based at Bagram and Salerno, and Task Force Storm, flying out of Kandahar Airfield, each have CH-47 Chinooks, UH-60 Black Hawks and AH-64 Apaches in their arsenals.

Chinooks are the big haulers, carrying personnel and supplies to far-flung locations. Black Hawks are &#8220;the SUVs,&#8221; said Maj. Kevin Vizzarri, the executive officer of Task Force Sabre. &#8220;It could be a gunship, transport passengers ... it does it all.&#8221;

As for the personnel, most are based in either Illesheim or Giebelstadt, Germany, in the 11th Aviation Regiment or 12th Aviation Brigade. Trying to keep track of who&#8217;s who and where they are is difficult.

&#8220;You basically took the 11th and 12th and mixed it all up,&#8221; Vizzarri said. Add in a group of National Guardsmen from Oregon and Nevada, a few fixed-wing crews from Heidelberg, Germany, and their aircraft and hundreds of maintainers from the 7th Battalion, 159th Aviation Regiment from Germany and there are enough soldiers for three task forces.

Mingus said there are some differences between the two operations. Soldiers live in better conditions in Afghanistan. And, though Afghanistan boasts as much dirt and dust as Iraq, its terrain is much more mountainous.

Vizzarri, who flies Apaches, said flying at high altitudes presents a challenge for pilots. The thin air limits maneuverability. And, as Wednesday&#8217;s crash illustrates, changes in weather conditions can be extreme. Maintaining communications in all the mountains and valleys is another key.

Speaking of maintenance, Chief Warrant Officer 3 Mark Jones said those taking care of the helicopters face their own challenges. He said dust and heat would be bigger factors as the year progresses. But &#8220;the op tempo is the biggest challenge now.&#8221;

Sgt. Mark Deamron was in the country for a week before he went on his first mission, a visit by two Chinooks to a nearby village to deliver clothing and other supplies.

Vizzarri said crews would be making plenty of humanitarian missions as well as supporting coalition forces. He said most of the 100 or so helicopters will be in the air every day, with the crews going up slightly less than that.