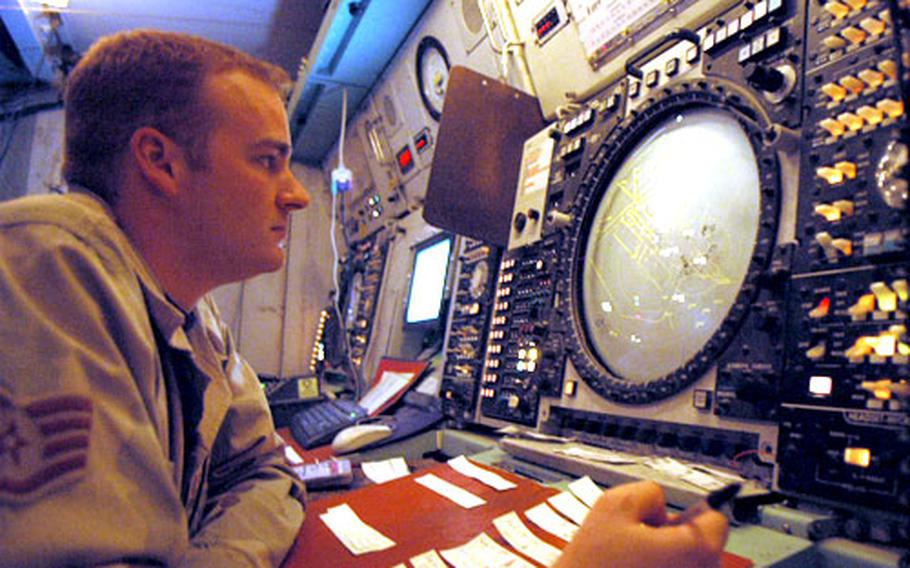 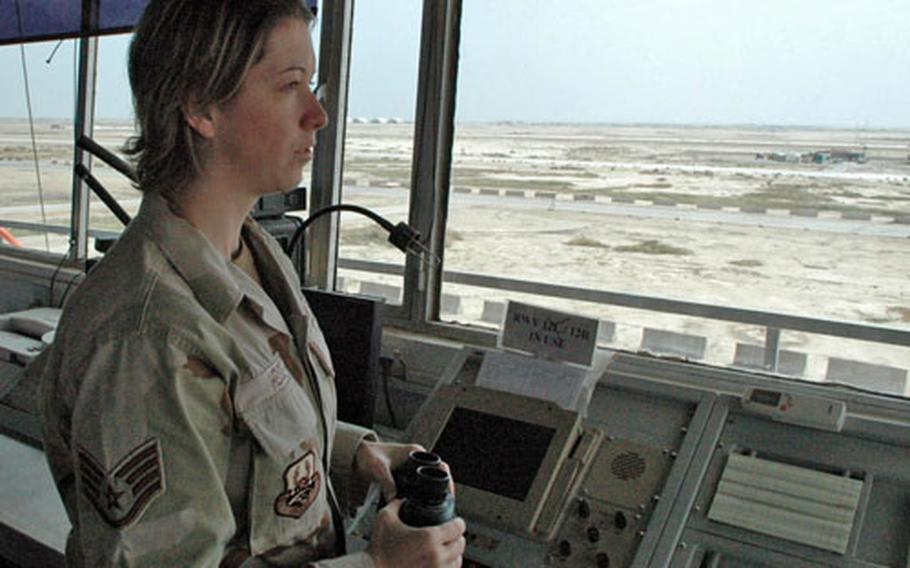 ALI BASE, Iraq &#8212; In a dark and cramped container box jammed full of glowing radar monitors, Air Force Staff Sgt. Scott Williams keeps his eyes focused on the skies over Iraq &#8212; or at least a huge chunk of them.

As an air traffic controller with the 407th Air Expeditionary Group, Williams and his fellow airmen are responsible for the safe passage of all aircraft in the southern third of Iraqi airspace.

On Monday, Williams had his hands full as he tracked and directed an assortment of jet fighters, cargo planes, choppers, robot drones and refueling aircraft, ensuring that none of them slammed into each other.

At any given moment, radar air traffic controllers can be in contact with anywhere between five and 25 aircraft, directing their movements and placing them at different altitudes so as to avoid collisions.

To complicate matters, air traffic controllers must also develop an ear for a variety of different accents. Ali Base, which is known to most U.S. servicemembers as Tallil, sits on the outskirts of Nasiriyah. The base hosts troops from Italy, the United Kingdom, Bosnia-Herzegovina, Romania, Japan and Australia.

Air traffic control is just one of the responsibilities the 407th AEG has at Ali Base. Other duties include base security and explosive ordnance demolition.

Controllers like Senior Airman Andrena Guerra said their vantage point made them feel very connected to the overall mission in Iraq.

Reyes agreed that when you are observing the flights of many coalition aircraft &#8220;you could start to see the overall picture.&#8221; He said he also enjoyed being busy.

The instrument flight rules room, or IFR room, is a darkened, heavily air conditioned box located near Ali Base&#8217;s worn airstrip. Its monitors are connected to a spinning, mobile radar unit nearby.

The controllers see little outside the darkened IFR room during their eight-hour shifts. Stepping from the IFR room into the bright light of day can be a bit of a shock.

The chief controller at the air traffic control complex, Hammond helped direct air traffic here two years ago on a previous deployment. He said things are a little more comfortable for controllers now, particularly in the airstrip&#8217;s control tower, which handles all traffic departing or arriving at Ali Base, or passing within a few miles.

Unlike the radar air traffic controllers, the tower controllers work in a glass-walled room several stories above the airstrip.

During his first deployment, controllers used a mobile control tower &#8212; a glass-windowed cab that fits on the back of a Humvee. &#8220;It was very cramped,&#8221; Hammond said.

Today however, controllers use an old Iraqi control tower.