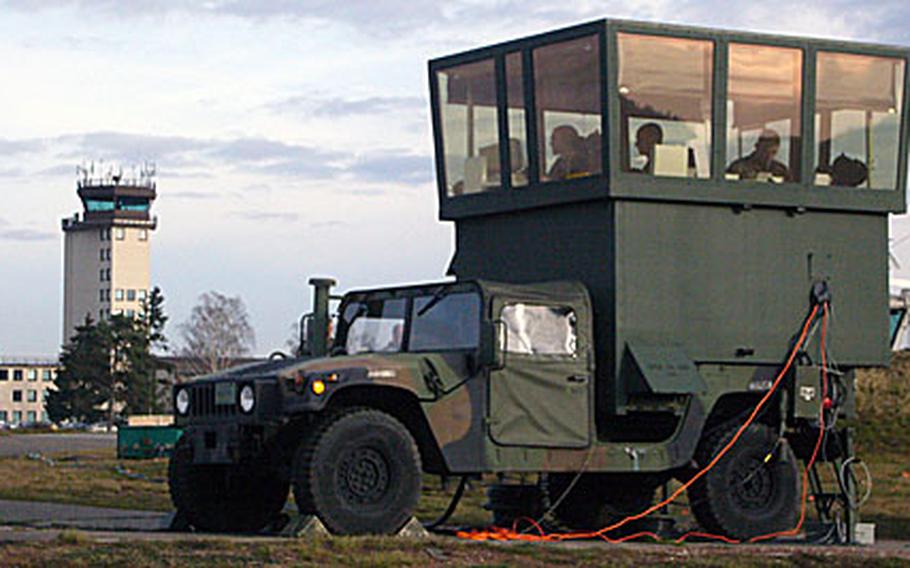 Air traffic controllers will be working out of this mobile control tower at Ramstein Air Base, Germany, for the next two months as their 10-story tower (seen in the background), gets a $313,000 refurbishment. (Courtesy of U.S. Air Force)

It may look like some sort of camper, but the MSN-7 mobile control tower isn&#8217;t filled with sleeping bags.

Instead, inside the MSN-7 tower can be found everything that air traffic controllers from Ramstein Air Base, Germany, need to handle the dozens of flights in and out of the busy airport each day.

Members of the 86th Operations Support Squadron starting using the mobile tower last week as their 10-story main tower undergoes a face lift, according to a U.S. Air Forces in Europe news release. Over the next two months, the 54-year-old tower will receive some $313,000 in upgrades.

The current tower holds double the equipment it was designed to hold, according to Tech. Sgt. Trevor Browning, 86th Operations Support Squadron, assistant chief controller, and once work is completed, the tower will include more work space.

Until then, controllers will be slightly lower to the ground &#8212; perched on the back of a Humvee.

The tower, which belongs to the 1st Combat Communications Squadron, has been used in several exercises and real-world operations, including in Bulgaria and Iraq, the release stated. It is one of seven mobile towers in the Air Force and the only one in USAFE.

Once the controllers were set up in their temporary home, it didn&#8217;t take long to prove they were fully operational: Within four hours of relocating to the mobile tower, controllers were quickly tested with an in-flight emergency which was handled flawlessly, according to the release.

&#8220;We are fully operational in the mobile tower,&#8221; said Senior Master Sgt. Donald Colbert, control tower chief controller. &#8220;It was a team effort to make this happen and I can&#8217;t thank everyone enough for the long hours and their positive attitudes.&#8221;

&#8220;When we deploy, we are often in towers similar to this one, so it helps prepare us for the future,&#8221; said Tech. Sgt. Eric Briggs, 86th OSS control tower watch supervisor, who worked the first shift in the mobile tower.

The controllers will be using the mobile tower until work is complete on the permanent tower sometime in March, the release stated.