Air show may return to Mildenhall in 2005 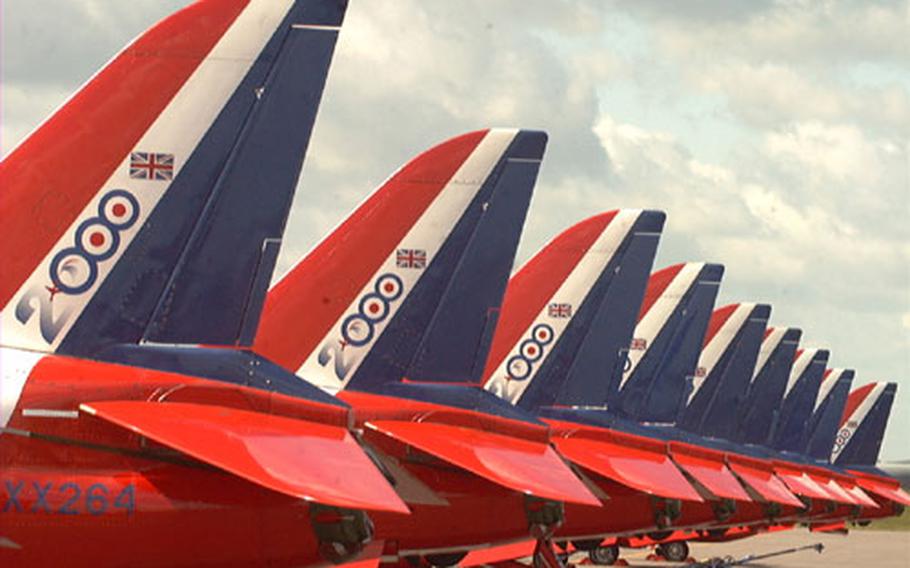 Aircraft belonging to the Royal Air Force&#39;s Red Arrows flying team sit at RAF Mildenhall, England, during Air Fete 2000. The air show, which has brought 500,000 to the base for one weekend, has not been held since 2001. The base is considering whether it will be held in 2005. (file photo by Ron Jensen / S&S)

RAF MILDENHALL, England &#8212; Air show enthusiasts may see the return next year of one of Europe&#8217;s largest air shows &#8212; or something similar.

The 100th Air Refueling Wing is still pondering the possibility of hosting Air Fete in 2005 after a three-year absence, although it could be smaller than the two-day event of the past that featured nearly 150 aircraft from more than a dozen nations and attracted up to 500,000 people to RAF Mildenhall.

&#8220;We are planning on doing a big community relations event of some type in late spring or early summer,&#8221; said Col. Richard Devereaux, the wing commander.

One possibility being considered is Air Fete, which hasn&#8217;t been held since 2001 because of security concerns and operational tempo since the start of the war on terror.

Those events would include base tours, static aircraft displays and, perhaps, some sort of flying show, Devereaux said.

Devereaux said a decision would have to be made no later than the end of September so planning can get underway for whatever option is picked. But, he said, it is important that the base do something to show appreciation to the people who live near the base.

Air Fete began in 1976 as part of the celebration of America&#8217;s 200th birthday. It was held every year, usually on Memorial Day weekend, until 1999, when it was called off during Operation Allied Force, the NATO-led effort to push the Serbs from the Kosovo province.

It was held again in 2000 and 2001 with crowds reaching half a million people for the Saturday and Sunday flying and static aircraft shows.

But world events have clipped the wings of Air Fete since then. Security worries and mission requirements caused the base to cancel the show that brought people from as far away as Switzerland.

Air Fete was not popular with the people who live near the base. Traffic choked the roads. Some local businesses closed for the weekend since few customers ventured out.

And security measures since the attacks on Sept. 11, 2001, have caused more inconvenience for local residents. Roads have been closed in the area of RAF Mildenhall and RAF Lakenheath, causing a handful of businesses to close because their customers were unable to reach them.

&#8220;I think it is important that we do a big event here,&#8221; said Devereaux, to lower barriers that have been raised between the base and the local communities.

Ken Thompson, a local businessman and member of the British-American Committee on the base, agreed that something should be done.

Devereaux said the base is talking with local governments, Suffolk County police, the Ministry of Defence and U.S. Air Forces in Europe while it considers which option will work best.

The wing must look at the potential mission tempo for next spring and early summer and consider security requirements for any event.