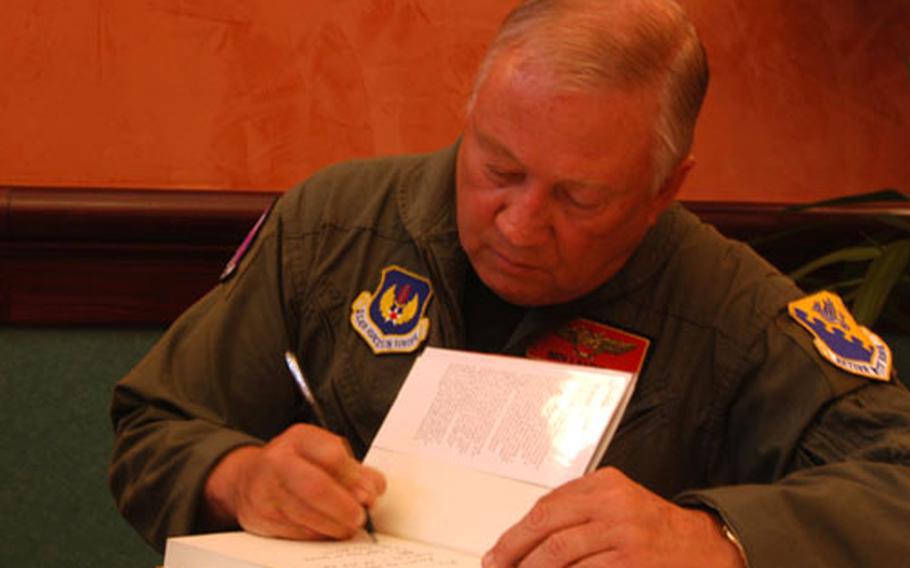 AVIANO AIR BASE, Italy &#8212; It isn&#8217;t often that a large group of Air Force officers gathers to listen to a civilian talk about air power.

Thursday was an exception. Ben Lambeth, a senior staff member at the RAND Corporation and a prolific author on the subject, offered observations at Club Bella Vista.

But Lambeth, a private pilot with more than 40 parachute jumps to his credit, described himself differently.

That meant academic degrees from the University of North Carolina, Georgetown University and Harvard University. But thanks to decades of flying in just about every type of aircraft the American military has &#8212; and those of a handful of other countries as well &#8212; he has practical experience as well.

But technology was one of the main topics of his talk. He said the Air Force is more powerful today than ever, partly due to the planes it flies.

But he sees potential problems on the technology front as well.

One is that communications systems are becoming so sophisticated that senior military and civilian leaders can essentially watch over a pilot&#8217;s actions almost as quickly as events occur. More improvements might tempt those higher up to take control of missions even though they&#8217;re thousands of miles away. In addition to making pilots mere button pushers, that could cause other problems. Lambeth, one of the first Westerners to fly a MiG-29 fighter in Russian airspace after the fall of the Soviet Union, said such a top-down command structure would be similar to Russia&#8217;s. And that wasn&#8217;t as effective as the American model.

He also said a lack of new technology might cause trouble. The F-16 is now more than three decades old. Efforts to replace the fleet with newer aircraft are moving slowly and are always in danger of getting axed by funding.

He pointed to the B-2 bomber, which was originally scheduled to be mass-produced. Billions of dollars went into research and development before changing world conditions prompted a large scale back. As a result, each plane produced effectively cost $2 billion.

But pushes to reduce the number of next-generation fighters produced will have the same result.

Lambeth also spoke on collateral damage. He said killing civilians and destroying property generally doesn&#8217;t achieve militarily objectives. That lesson was learned in World War II. So the military strives to keep such damage to a minimum.