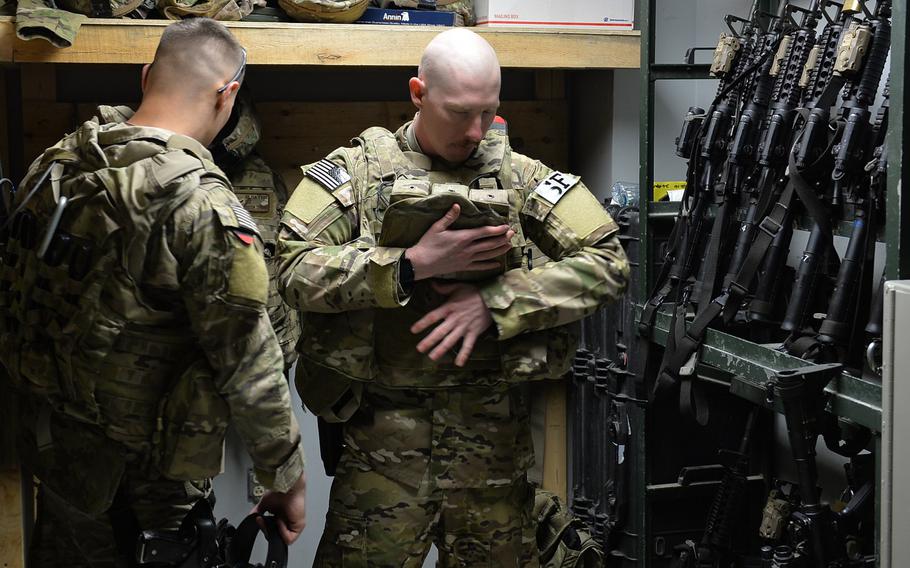 Buy Photo
Airman 1st Class Jesse Johnson and Staff Sgt. Thomas Tyrone, members of the U.S. Air Force's Fly-Away Security Team at Bagram Air Field, Afghanistan, walk toward a C-130J Super Hercules on Sept. 23, 2016. The team provides security on board and on the flight line at high-risk airfields or when there is a risk of hijacking. (Chad Garland/Stars and Stripes) 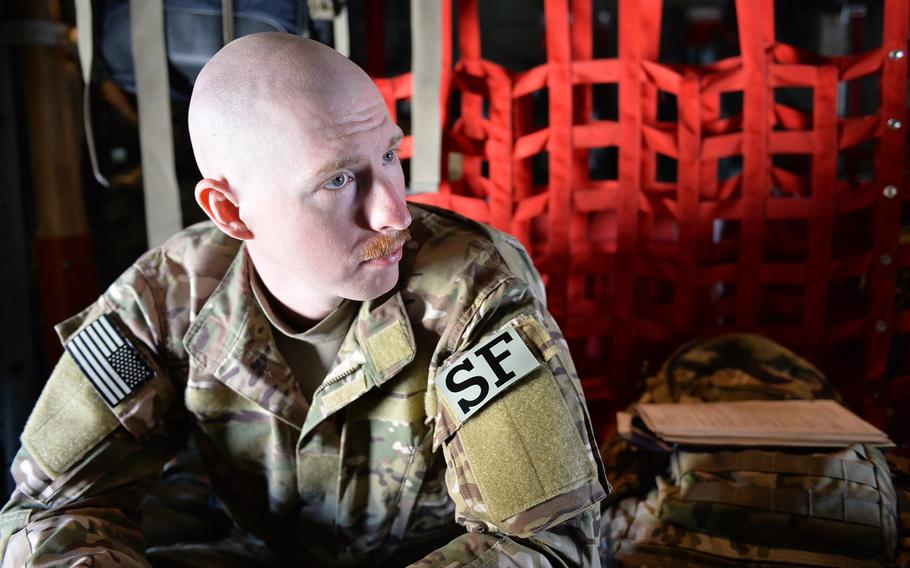 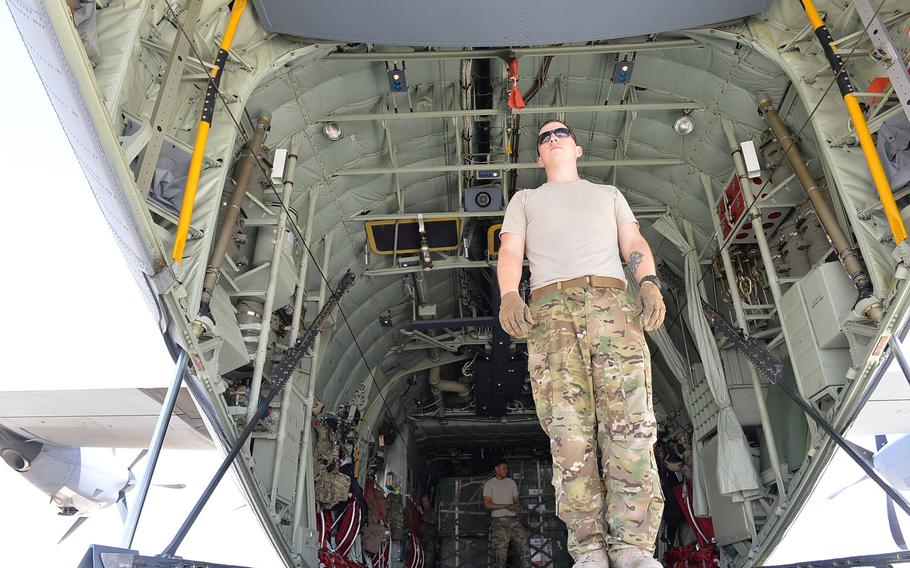 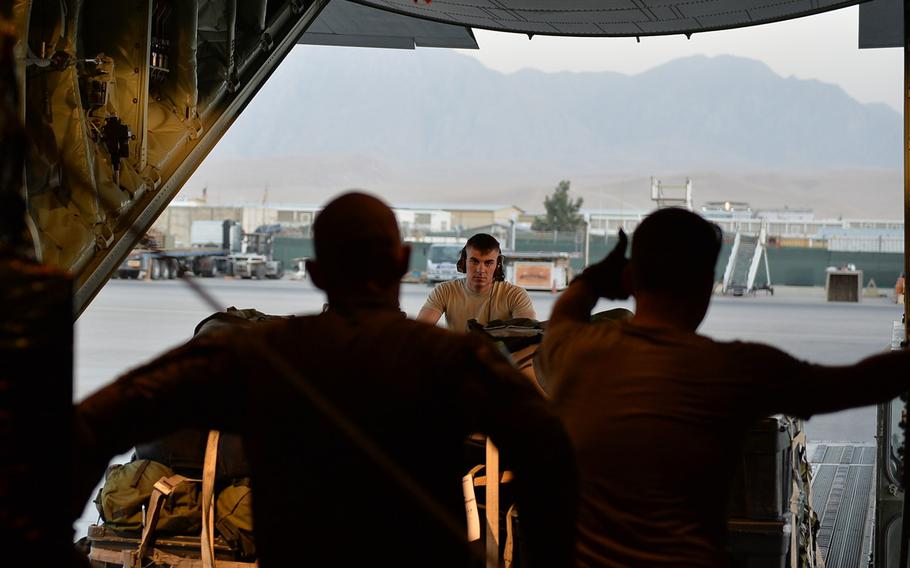 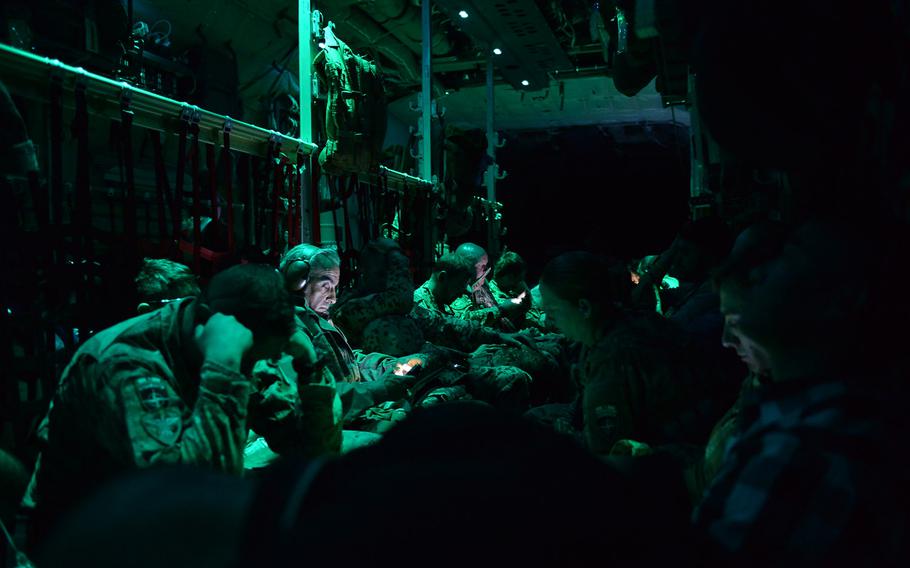 Buy Photo
Passengers on a C-130J Super Hercules doze or watch videos on their personal devices during a flight from Mazar-e-Sharif to Kabul International Airport on Sept. 23, 2016. (Chad Garland/Stars and Stripes) 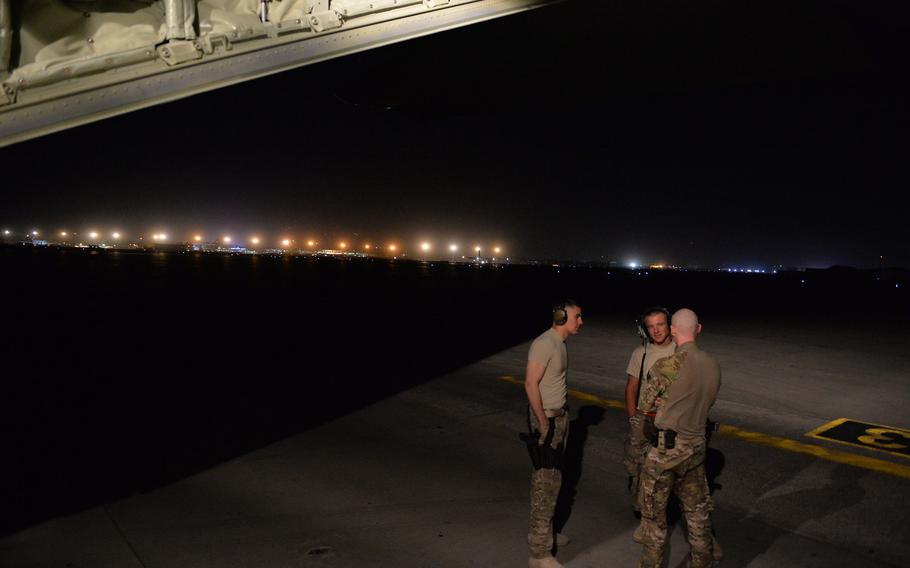 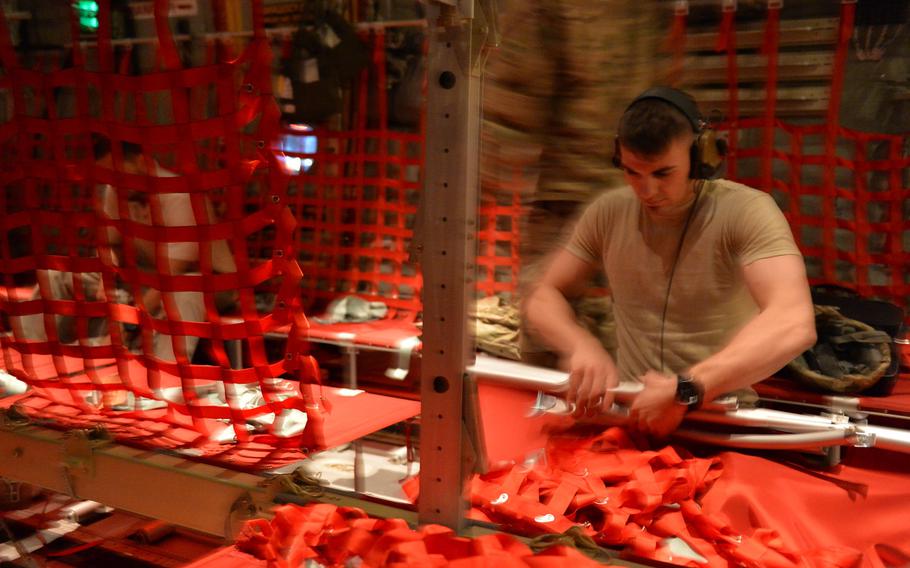 Buy Photo
Airman 1st Class Jesse Johnson rolls up a troop seat onboard a C-130J Super Hercules. Johnson, a member of the team that provides perimeter security on the ground and guards the flight deck in the air, frequently pitches in on other crew tasks to help stave off boredom on long missions that don't always require added security. (Chad Garland/Stars and Stripes)

CAMP SHORAB, Afghanistan — After a few orbits high over the airfield at the former British military base in Afghanistan, the C-130J Super Hercules began a rapid descent to the ruddy-brown earth.

The two craned their necks and swiveled their heads, checking the fast-approaching ground below through the bank of cockpit windows. Soon joining them in this ritual was Staff Sgt. Thomas Tyrone, 26, a member of the late September mission’s Fly-Away Security Team, or FAST.

In teams of two to four, the “air marshals of Afghanistan,” as one member calls them, guard the flight deck from potential hijackers on certain flights and provide added perimeter security around the aircraft while parked at high-risk airfields like Shorab. The base, formerly known as Camp Bastion, is located near the capital of Helmand province, where fighting now rages between government forces and Taliban insurgents.

“We’re the first and last line of defense,” said Tyrone, a Georgia native. “If anything happens, it’s two dudes out there hoping for the best.”

Tyrone is with a 13-man FAST detachment from Hill Air Force Base in Utah that deployed to Bagram Air Field for six months in April. By the end of September, they’d collectively logged more than 250 missions, racking up nearly 1,000 flight hours while securing aircrews that hauled more than 8,000 passengers and 6,500 tons of cargo across Afghanistan.

‘One less thing to worry about’

After 15 years at war, some places stubbornly remain, or have again become, hostile to Western forces in the country.

Camp Shorab, an Afghan base built on what remains of camps Bastion and Leatherneck, where thousands of Western personnel lived at the height of the war, now hosts just a few hundred U.S. and allied troops and advisers.

But it doesn’t meet the Air Force’s high standards for flight-line security, which puts it on a short list of airfields in Afghanistan that call for a fly-away security detail on the C-130s ferrying passengers and supplies from Bagram and back.

On the ground, the team is responsible for keeping asylum-seekers at bay and fending off attackers long enough for the pilots to get the turboprop-powered Super Hercules airborne, even if that means the team stays behind.

“It’s one less thing to worry about,” he said.

‘Sketchy’ is a relative term

Shorab requires only a two-man team, but some places are sketchier than others. In Kunduz, which the Taliban took briefly last year and again entered this month, the airfield lacks a perimeter fence, which means flights there arrive with a larger number of FAST members.

Still, Shorab has its threats. On the approach in late September, someone spotted a truck stopped along a road outside the base perimeter, under the planned flight path to the runway. Svendsen began a dizzying evasive maneuver, banking the hulking transport plane to avoid the airspace over the truck, just in case it was packed with explosives.

“We would have been at about 1,200 feet,” Tyrone later explained. “You don’t want to be that close to something that big in Afghanistan.”

In the cockpit, Tyrone also reads the terrain for traffic volume and things that seem out of place, he said, details he passes on to intelligence officials and uses to identify looming threats he may face on the flight line.

Among the dangers, “the big one is vehicles coming at you,” said Airman 1st Class Jesse Johnson, 22, something a parked truck at the end of the runway could become. Johnson, who is from southern Michigan, was Tyrone’s partner on the mission.

After donning protective gear and radios, Tyrone and Johnson made their way with their rifles through the cavernous cargo bay to the back ramp of the aircraft as it taxied along Shorab’s hot, dry runway. They jumped out, taking up posts about 30 feet from the plane — front and rear — and scanning the horizon with rifles at the ready.

The plane’s four turboprop engines continued to run, blowing hot exhaust at Tyrone. Morrison, the co-pilot, said crews used to shut the engines down at Shorab until FAST members told them that the engine start checklist takes longer than they could expect to hold off attackers.

This visit to Shorab was uneventful, however. Passengers got off, a few got on, and just before the crew raised the ramp, Tyrone and Johnson were called in from the perimeter.

“The takeoff might be weird,” Tyrone said, taking his seat again near the cockpit. The pilot would have to avoid the truck again on the way out.

Security teams face dangers beyond the threat of attack. Last October, two FAST airmen were among 14 people killed when a C-130J crashed shortly after takeoff from Jalalabad Air Field in eastern Afghanistan due to pilot error.

Missions can be relatively quick — a few hours from Bagram directly to Shorab and back, for example. This was not one of those missions. It would last many more hours as the aircraft hopped clockwise around the country from the south: to Kandahar Air Field, then Camp Arena in western Herat, Camp Marmal in Mazar-e-Sharif in the north, Kabul and back to Bagram. Shorab was the only airfield requiring the FAST members to suit up for perimeter duty.

“Ten-hour days for 15 minutes of work,” Tyrone said. His last five missions in a row had been like that.

Despite the often long hours and grueling operational tempo — teams went out almost daily in July and August and remained on 24/7 alert in September — the job has its perks, such as getting to see much of the country, even if it’s from 25,000 feet.

“People do pay money to see mountains like these,” Svendsen said, looking out over a field of dark ridges as far as the eye could see, somewhere over the middle of Afghanistan.

The mission itself is rewarding, FAST member Staff Sgt. Jesus Mora said in an earlier interview, because “you get to do what you’re trained to do.”

“It’s not common, but it’s cool to do,” he said. The business jet is a significant upgrade from spartan C-130s.

Sometimes, “it’s the little things,” Mora said, as when they grabbed Asian food in Kabul or authentic pizza in Herat, where Italian forces are deployed.

And sometimes at the end of a long mission, small favors make a big difference. Svendsen shaved minutes from the flight back to Bagram, landing roughly 14 hours after the crew’s preflight briefing but still before the dining facility stopped serving steak dinner.

Also, Tyrone and Johnson learned that the next day held no slated missions, no 6 a.m. briefing, no shaky descent into the Taliban heartland.

Steak and a day off flying. “We lucked out,” Tyrone said.