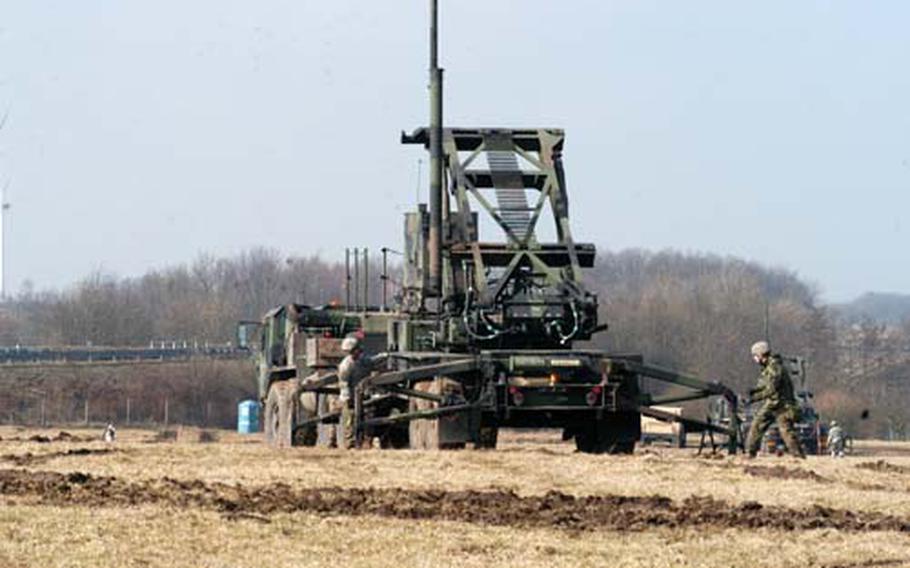 Soldiers with Battery A, of the 5-7th Air Defense Artillery, ready a Patriot missile launcher to be hauled to a new destination. The exercise was part of nearly three weeks of training conducted by the 500 soldiers in the hills near Baumholder, Germany. (Seth Robbins / S&S)

Packing and moving an entire Patriot missile system &#8212; not exactly built to be portable &#8212; is difficult in the best conditions.

But soldiers with the 5-7 Air Defense Artillery were doing it in less than an hour, in the pelting snow and rain, even as their vehicles mired in thickening mud.

"The weather has been a pretty good obstacle," said Staff Sgt. Michael Dimario, with Headquarters and Headquarters Battery.

The sun rarely shone during the nearly three weeks the 500 soldiers practiced hauling the missile equipment to different spots in the hills near Baumholder.

By the end, their fatigues were drenched and their boots were coated in muck.

But their biggest complaint was that the mud slowed the packing of the equipment and lowering of the antennae towers, a task that had to be completed in less than 45 minutes.

"It&#8217;s very difficult to get this equipment moving in three feet of mud," said Dimario.

The Patriot system was first thought too unwieldy to move using troops on the ground. But during Operation Iraqi Freedom in 2003, several batteries leapfrogged forward to cover the airspace of the units driving toward Baghdad.

"We act like a big umbrella," said Capt. Todd Hines, commander of Battery A.

It takes 74 soldiers to move a Patriot battery, which consists of five large pieces of equipment, including the launchers and the missiles.

A single snapped cable, however, can interrupt operations, a frequent problem in plunging temperatures.

"They tried to create as much stress as possible," said Sgt. Bryant Palmer of Headquarters and Headquarters Battery.

"We train for the worst-case scenarios."

Palmer works inside the Engagement Control Station or "brain," as it is commonly called.

"I tell them what to shoot, and they do the shooting," he said.

Hines marveled at how quickly people such as Palmer must react when an object is seen on one of the screens, which look like air traffic control monitors.

The button &#8212; white at first &#8212; turns crimson, and they can launch anywhere from two to two dozen missiles.

Although no missiles were launched during the exercise &#8212; the only place they can be tested is at a NATO facility in Crete &#8212; Capt. Hines said the training was necessary because it allowed the troops a chance to work with the equipment and tackle new terrain.

The missile system, he said, has come a long way since it was used in 1991 in the Persian Gulf War.

"Now, it can even find a specific spot on that bullet."