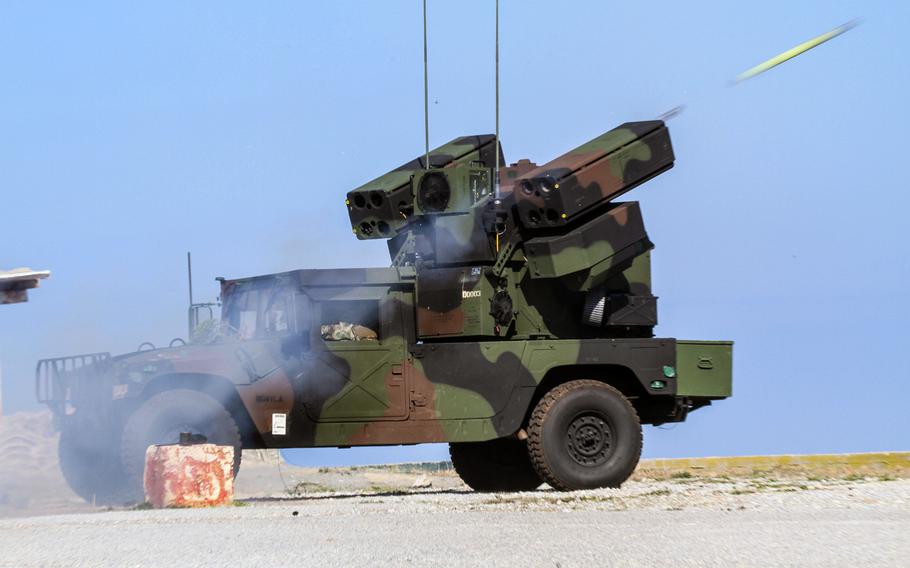 An Avenger unit from 2nd Battalion, 263rd Air Defense Artillery Regiment fires a Stinger missile during Artemis Strike, a live-fire exercise at the NATO Missile Firing Installation on Crete, Nov. 6, 2017, during their rotation in Europe. On Wednesday, the Army stood up a Short Range Air Defense unit in Germany, the first such unit to be stationed in Germany since the 90s. (Jason Epperson/U.S. Army)

The Army has activated a new short-range air defense unit in Germany, the first such unit stationed in the country since the end of the Cold War drawdown.

Commanded by Lt. Col. Todd Daniels, the unit falls under the 10th Army Air and Missile Defense Command and will consist of five battery-level units equipped with FIM-92 Stinger missiles.

Army Guard units on rotation in Europe have been training with the Stinger missile system for months, but the regiment will be the only unit stationed indefinitely on the Continent that also employs the Avenger Air Defense system, an automated, mobile fire unit.

The activation is part of larger troop boost announced this summer that will result in about 1,500 more soldiers and their families being stationed in Europe by 2020.

Along with the new regiment, Europe is slated to host a new field artillery brigade headquarters and two Multiple Launch Rocket System battalions. The Continent will also gain additional supporting units at Grafenwoehr, Hohenfels and Baumholder.

The overseas force structure change is a result of the 2017 National Defense Authorization Act, which directs the Army to increase its numbers.

“The addition of these forces increases U.S. Army readiness in Europe and ensures we are better able to respond to any crisis,” U.S. Army Europe said in a statement over the summer.

With the exception of the 4th ADA Regiment, the first of those units to be activated, the Army has yet to designate names for the new units.