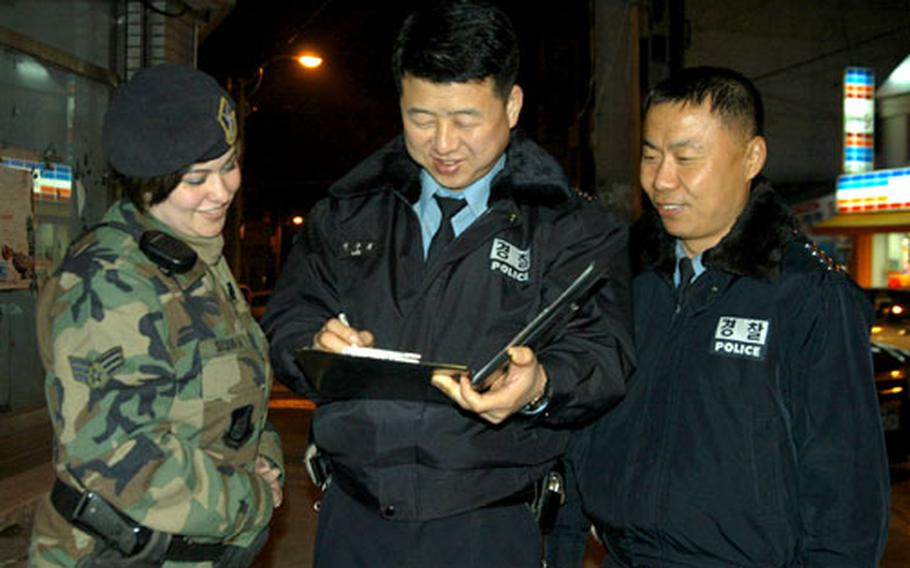 The Korean National Police suggested that base officials assign some airmen to accompany KNP officers patrolling a section of Kunsan City whose bars, clubs and restaurants tend to draw U.S. servicemembers.

The patrol also will watch for servicemembers out past the U.S. Forces Korea curfew, or who violate the rule that airmen not be off base without a companion.

But patrol members also will keep an eye on servicemember safety. If they spot a servicemember who&#8217;s sick, injured, in danger, or, for example, too drunk to return safely to base, they&#8217;re ready to step in.

Under U.S. Forces Korea rules, weekend curfew kicks in at 1 a.m. on Fridays and Saturdays.

The town patrol has for decades patrolled a similar off-base entertainment district called A-Town. About three miles from the base and not part of Kunsan City proper, A-Town is a commercial district of shops, bars and restaurants catering mainly to U.S. servicemembers. The town patrol&#8217;s offices are in A-Town.

&#8220;The new thing is that now, on weekends, an hour prior to curfew and an hour after curfew, we meet up with Korean National Police and one of our interpreters and actually go into Kunsan City, which we&#8217;ve never been allowed to do before,&#8221; said Zier.

Kunsan Air Base is home to the 8th Fighter Wing, also known as the Wolf Pack. The interpreter is a Korean employee of the wing.

The KNP patrols in one of its vehicles, the airmen in an Air Force vehicle. Two airmen and the interpreter are assigned to a given patrol; thus far the KNP has assigned a detective in civilian clothes and one uniformed officer.

On joint patrols in Kunsan City, KNP officers take the lead, Zier said. Kunsan forbids its town patrol members from entering bars, clubs or other establishments while on patrol; &#8220;currently we don&#8217;t have jurisdiction to do that.&#8221; Instead, Zier said, KNP officers enter those establishments and &#8220;we remain in our vehicle.&#8221;