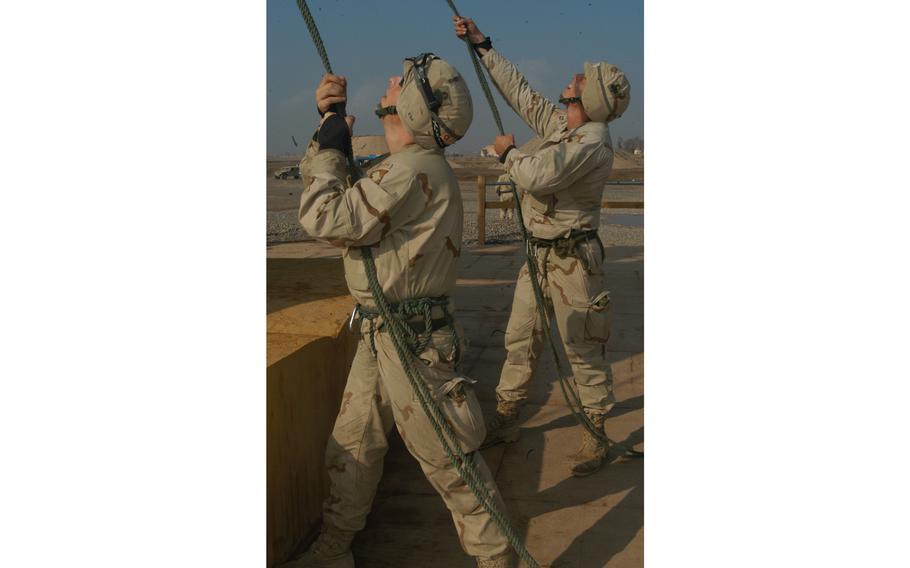 QAYYARAH WEST AIRFIELD, Iraq — The 101st Airborne Division has bragging rights as the only air assault division in the world.

But since it deployed to Iraq from Fort Campbell, Ky., in March, it was quickly losing air-assault-qualified soldiers, who were getting out of the service and moving to new duty stations.

So the Army brought the school to the soldiers.

It’s the first time the Sabalauski Air Assault School has moved operations to a foreign country and a combat zone since it was founded in 1974, said Staff Sgt. Larry Blocker, chief instructor.

Soldiers in the division’s brigade combat teams, from bandmembers to gunners, attend the six-day course at the remote Qayyarah West Airfield in northern Iraq, south of Mosul.

Similar to boot camp, 15 instructors do what they can to motivate soldiers as they learn how to work in and around aircraft. 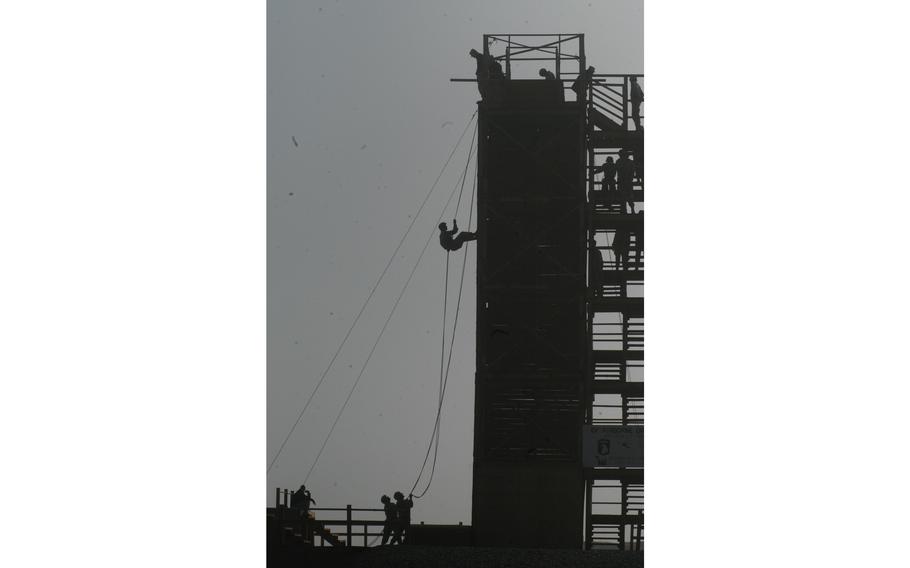 “You’re lost in sauce!” screams an instructor as a student “possums” while rappelling, loses his balance and flips backward, feet in the air.

“They’re getting everything so fast and furiously here; motivation is a big thing,” said Blocker, 30, from Marcellus, Mich.

Every time a soldier’s left foot hits the ground while jogging, the soldier yells, “Air assault!” A soldier who fails to sound off, doesn’t follow instructions or just plain doesn’t seem motivated is ordered to do 10 push-ups.

More than 1,200 soldiers have graduated from the overseas school since it opened Sept. 15. About 20,000 soldiers are assigned or attached to the division in Iraq, which has been here longer than any other.

“The goal is to have everyone in the division air-assault qualified,” Blocker said. 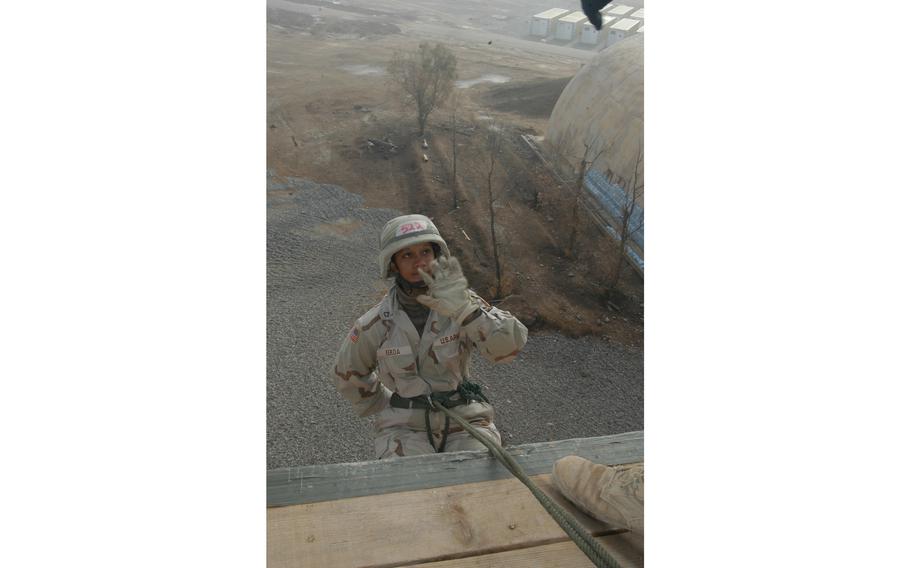 Pfc. Hinemoa Kekoa raises her hand to show the instructor that she is properly guiding herself down the rappelling tower at the 101st Airborne Division’s air assault school at Qayyarah West Air Field in northern Iraq. Kekoa, 22, from Waipahu, Hawaii, is an automated supply specialist with B Company, 426th Forward Support Battalion, 1st Brigade Combat Team. (Kendra Helmer/Stars and Stripes)

A recent class, whose members were from the 1st Brigade, started out with 156 students. All but four were expected to graduate. A student who fails can retest right away. A second failure means the soldier has to start the school over.

“They say, ‘No, you don’t wanna go there, there’s PT all day long, you’ll get burned out.’ But it hasn’t been as bad as I thought,” Sgt. Takethia Smith said with a smile. “I think I heard [all the stories] from the screw-ups.”

At 47, Sgt. 1st Class Brian Valley was the oldest student. His younger classmates were quick to tease.

“I outrank any of the instructors,” said Valley, a dining facility manager from Rice Lake, Wis., with the 3rd Battalion, 327th Infantry Regiment. That didn’t matter, though, as they screamed at the platoon sergeant when he possumed.

The six-day course is a condensed version of the 10-day stateside school, minus a few elements because of lack of facilities and time. Soldiers don’t have to do the 12-mile road march or grueling obstacle course. Each of the three phases lasts two days. Students wake at 4:45 a.m. and train until about 8 p.m.

The second phase, sling-load operations, teaches how to prepare a sling-load for common loads, such as Humvees, howitzers and cargo loads.

Rappelling is the third phase. Students first crawl up a 16-foot wooden ramp. Then they rappel down a 43-foot tower face. Finally, they rappel off the tower’s open side, which simulates rappelling from an aircraft. Students are tested on various rappels, including with a 25-pound rucksack and weapon. They have to show that they can lock in to a position, making a teardrop with the rope.

“If the rope comes off the ground, they have to be able to hold themselves sustained above the ground,” Blocker said. 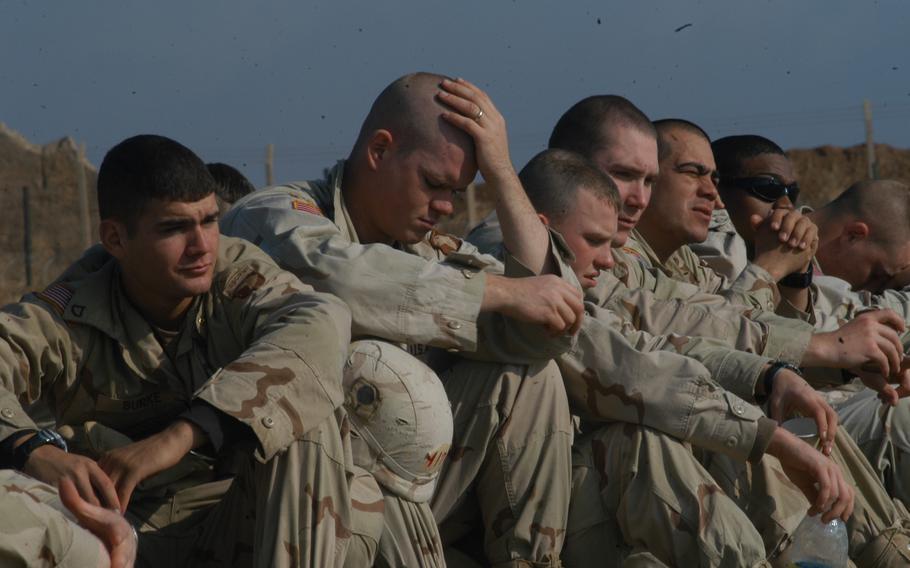 On the school’s final morning, soldiers rappel out of a Black Hawk. In late afternoon, they graduate, earning the right to wear an air assault qualification badge.

That’s on Saturday. On Sunday, the next class starts.

There’s no break for the instructors.

But back home, they get plenty of recognition. At a NASCAR event at California Speedway in Fontana, soldiers rappelled from a Black Hawk. “I could hear 60,000 fans cheering over the roar of the rotor wash,” Blocker said.

During an appearance on “The David Letterman Show” instructors listed the top 10 things soldiers say during rappelling (like “Spiderman, kiss my ass”).