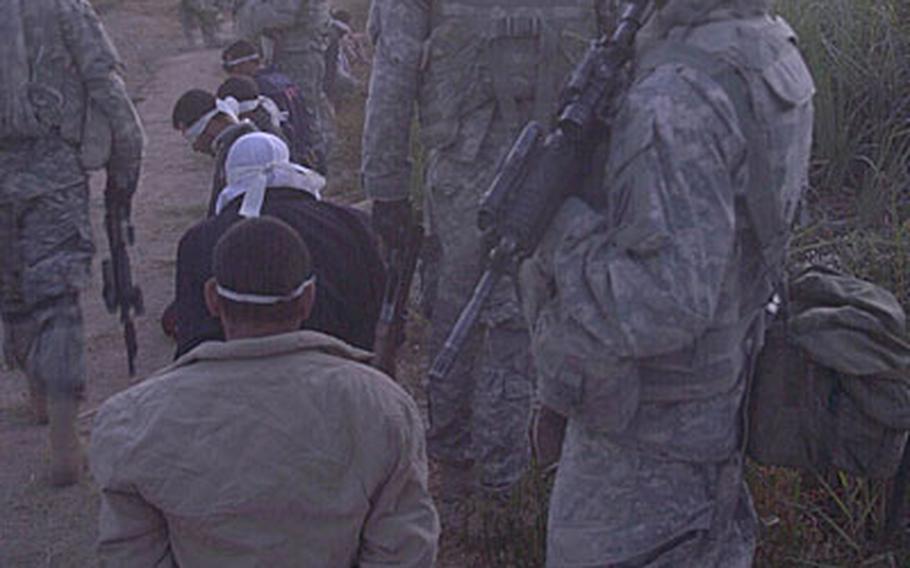 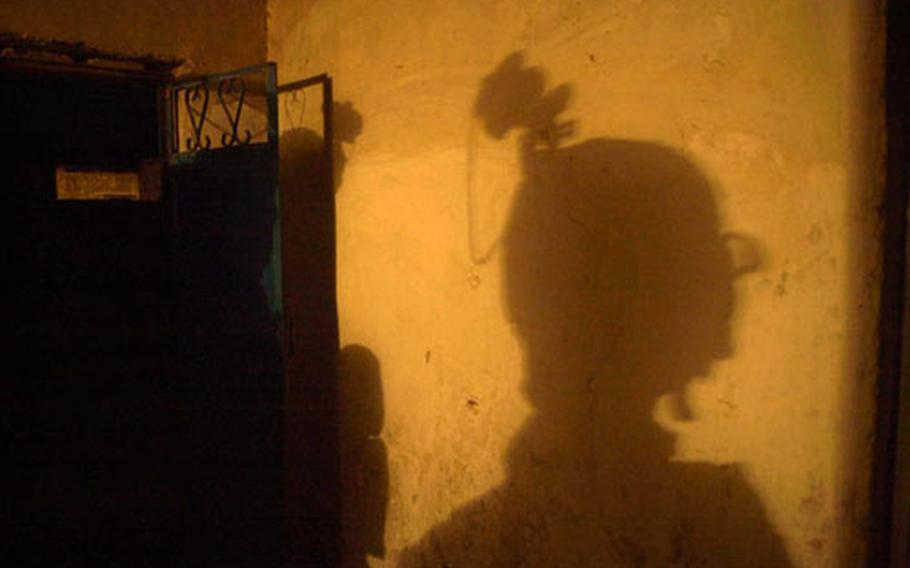 A soldier&#39;s shadow falls on the wall of a compound searched during an early-morning air assault mission near Salman Pak, Iraq. (Joseph Giordono / S&S) 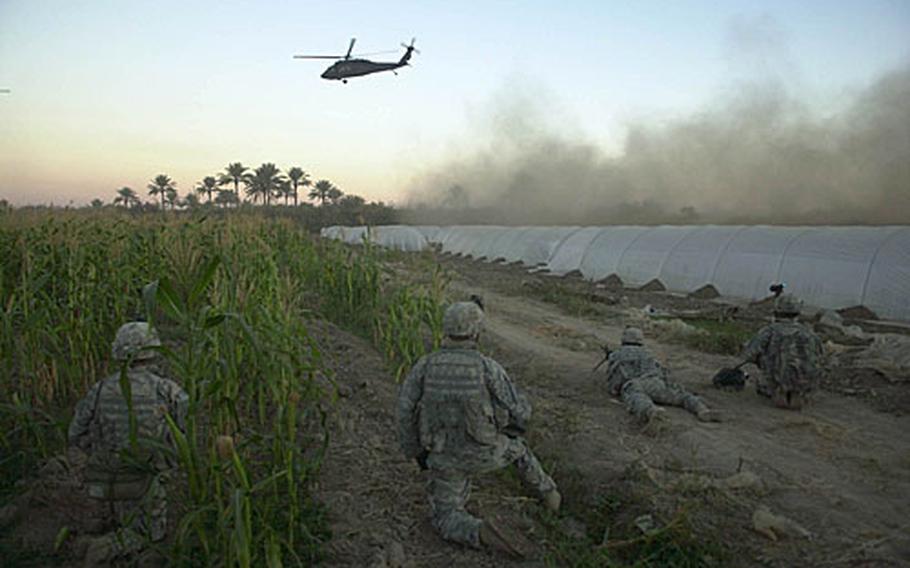 Soldiers wait as a Black Hawk helicopter lands to take the troops and 13 detainees back to base after the raid. (Joseph Giordono / S&S)

Some 40 soldiers sprang from Black Hawk helicopters around 4 a.m., raiding two compounds in a village of about 5,000 people near Salman Pak, southeast of Baghdad. Within minutes, the soldiers had gathered all the men they&#8217;d seized, questioning them and comparing their faces to a description and sketch of the target.

One of the men detained was the target&#8217;s father; soldiers believed that one of the other men in custody was either the man&#8217;s brother or the target himself.

While violence in other areas of Iraq has declined, the region around Salman Pak has remained one of the most dangerous for American troops and Iraqi civilians.

U.S. military officials say a mix of Sunni extremists &#8212; with alleged ties to al-Qaida in Iraq &#8212; and a network of Shiite militias in the area create a volatile mix. Targeted raids like Sunday&#8217;s have become a favored tactic in trying to break insurgent cells and capture their leaders.

The chilly air assault on a clear, moonlit night was atypical of the fight facing the battalion, part of 3rd Brigade, 3rd Infantry Division, because of a last-minute change in the target location and the ensuing change in tactics.

Planning and rehearsals for the raid had taken up much of the previous two days for the soldiers, led by the 1st Battalion, 15th Infantry&#8217;s Company B, based at Combat Outpost Cahill, a small &#8220;surge&#8221; base on the edge of Salman Pak. Soldiers rehearsed landing about 500 meters from the target houses, then quickly setting blocking positions and searching a series of buildings.

It was at least the third raid targeting the man, described as a leading Sunni extremist who runs several cells in and around Salman Pak.

But just two hours before the raid was to launch, new intelligence said the target was at a different compound, some 500 meters away from the original target area, said Capt. Rich Thompson, Company B commander. The plan changed.

As the Black Hawks landed in a nearby field, soldiers began moving into position by trotting along a dirt road lining a canal. When helicopters circling above radioed they had spotted movement from the compound, and snipers reported at least two men on the rooftops watching the soldiers&#39; lane of approach, Thompson ordered shots fired from the helicopters to keep anyone from fleeing and to distract from the ground soldiers&#8217; movement. Several series of loud 30 mm machine gun fire rang out.

Troops raced down a shabby dirt road to the target houses, entering and searching for whomever they could find.

Minutes later, a number of women and children were huddled under blankets in one room, sometimes pleading with the soldiers in Arabic. Outside, the men were blindfolded, bound with zip ties, and lined up kneeling facing a wall. A couple of cell phones rang repeated while the men were questioned, while at least one of the detained men sobbed and shivered. An older man, who said he was the target&#8217;s grandfather, was briefly questioned, then let go.

Soldiers searching the compounds found a pair of AK-47s &#8212; hardly uncommon in Iraq &#8212; but also a series of papers allegedly detailing killings and kidnappings, along with cash and radios hidden in a haystack.

As the sun rose, the soldiers moved the detainees to a new landing zone, in a nearby cornfield. The helicopters returned, and the soldiers piled in, wedging the detainees between their legs and equipment on the floor of the Black Hawks.

&#8220;Worst-case scenario, we disrupted what he wants to do,&#8221; Thompson, the company commander, said. Best-case scanario, they had their man.

But if the main target does not turn out to be one of those in custody, Thompson said, he now knows that &#8220;in the middle of the night, any given night, we can be in there.&#8221;