Air ambulance unit returns to Germany after 11 months in Iraq 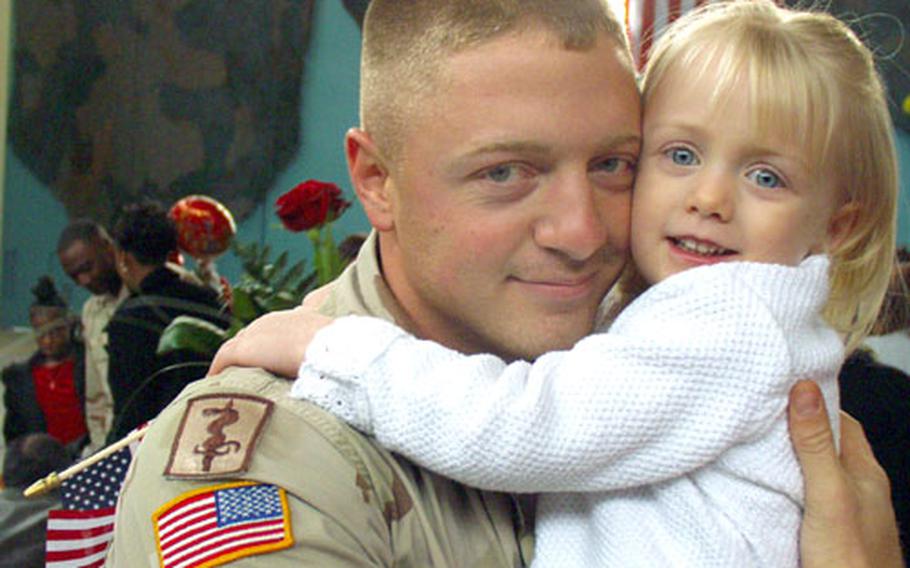 Sgt. Sean Smedley of the 45th Medical Company hugs his daughter MacKenzie, 3, after the unit returned to its home base of Katterbach, Germany, Wednesday. (Steve Liewer / S&S)

Sgt. Sean Smedley of the 45th Medical Company hugs his daughter MacKenzie, 3, after the unit returned to its home base of Katterbach, Germany, Wednesday. (Steve Liewer / S&S) 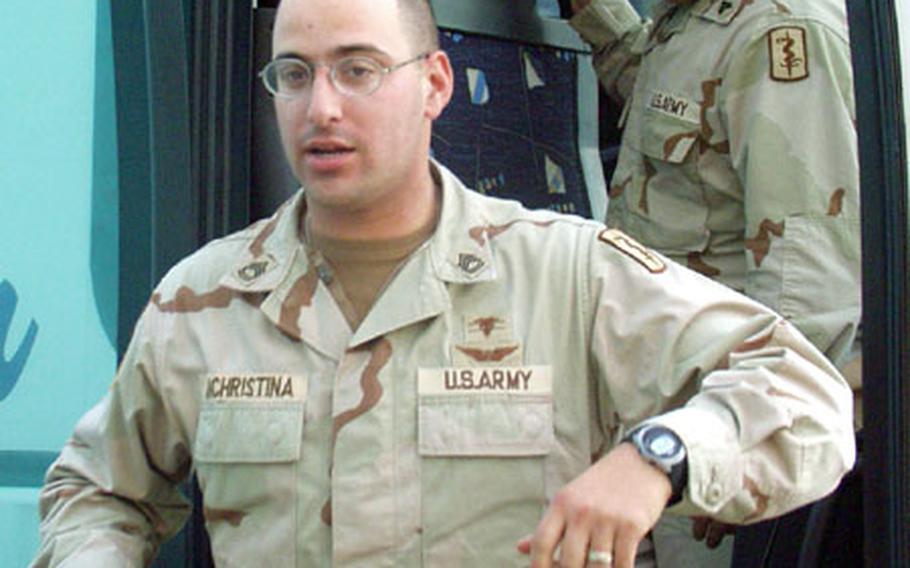 Sgt. 1st Class Vito DiChristina of the 45th Medical Company was one of more than 100 soldiers and officers that returned to Katterbach after an 11-month deployment to Iraq. (Steve Liewer / S&S)

Eduardo III was much too little to brave the German winter for Wednesday&#8217;s homecoming, but his four sisters showed up to meet their dad. So did his mother, Tanya Rivera, who talked the doctors into letting her out of the hospital so soon after delivering.

The Riveras were among more than 100 families that got an early Christmas gift Wednesday when the air ambulance unit returned home ahead of schedule. Better still, the company did so without a combat loss.

The company spent most of its deployment in Taji, a bombed-out former Iraqi air force base north of Baghdad. During the year, the unit flew more than 3,823 patients on 2,500 medical evacuation missions. Its UH-60 Black Hawk helicopters racked up 4,550 flight hours.

That the deployment ended well did not mean soldiers and their families found it easy to endure. Stephanie Corr had to cope alone with repeated visits to the hospital after her daughter Alisa, 3, was diagnosed with epilepsy.

Earl Rhoden, a former soldier now serving in the Army Reserve, held two balloons and a red rose as he waited for his wife, Sgt. Latoya Rhoden. They&#8217;ve been together for 10 years, and married for two.

Capt. Tresa Van Heusen of the 235th Base Support Battalion in nearby Ansbach predicted that the 45th Medical&#8217;s return will boost spirits in Katterbach. Most of the soldiers belong to the 1st Infantry Division&#8217;s aviation brigade, which remains in Iraq but is expected home within the next three months.

And just in time for the holidays.