Aiming to slow down the speedsters 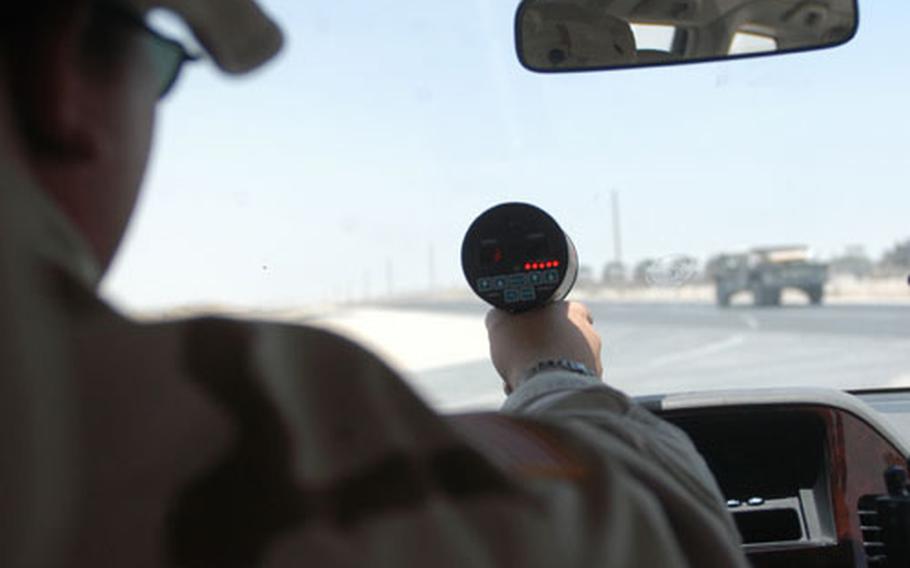 CAMP ARIFJAN, Kuwait &#8212; After receiving a new radar gun, the military police members handed out their first speeding ticket to a driver going about 30 kilometers above the 60-km-per-hour speed limit.

They were surprised to find the base mayor, Lt. Col. Randy Odom, Base Support Battalion commander, behind the wheel. After all, Odom is the person responsible for procuring the MPs&#8217; resources.

He said the speed limit signs were brand new at the time, so he can&#8217;t be fully to blame.

It was a lesson in irony. The military police framed his ticket with a note that says he was the first to receive a ticket with the radar gun he provided.

The ticket demonstrates not only that everyone is subject to the rules, but that U.S. forces take safety and driving regulations seriously, even far from home in a dusty camp.

Speeding is rampant in Kuwait and accidents are frighteningly common on highways where mutilated wrecks appear nightly.

&#8220;I see cars wrapped around light poles,&#8221; Odom said. The remains of an accident are pushed to the side and become reminders of the dangers of speed.

&#8220;We don&#8217;t like to be out there ourselves,&#8221; said Lt. Col. Robert Brekke, provost marshal at Arifjan and law-and-order officer for 438th Military Police Detachment from Salt Lake City, attached to the 220th MP Brigade.

At Arifjan, MPs issue a few tickets a day for a variety of violations, including speeding.

Off post, servicemembers are ticketed by Kuwaiti police or are caught on cameras that detect and photograph speeders. Tickets are sent to the U.S. headquarters and distributed to individual commands.

During the buildup to the Iraq war, when many thousands more vehicles were on roadways, tickets and accidents were more common. But lately, the numbers have been slim, MPs and base officials say.

Most military vehicles, such as Humvees, can&#8217;t drive fast enough to trip the camera. So U.S. forces most often see tickets for locally leased vehicles such as pickup trucks and contractor vehicles registered to the military.

MPs don&#8217;t work speed patrols off base, but they investigate all military-related accidents the Kuwaitis encounter.

During the buildup to the war, &#8220;we were out there every other night&#8221; investigating crashes, said Capt. Jared Johnson, operations officer, from Syracuse, Utah.

There were many U.S. vehicles on the road, Johnson said, and Kuwaitis weren&#8217;t used to them.

Since U.S. troops arrived in Kuwait for the buildup to war, there have been only two accidents in which Americans were at fault.

To curb accidents, MPs focus on traffic and safety violations. Since receiving the radar gun, MPs have issued two to three tickets a day on post.

They give tickets for speeding, soldiers not wearing seat belts or Kevlar helmets in tactical vehicles or parking those vehicles in the wrong places. The base has designated parking spots for Humvees and other tactical vehicles.

Tickets for safety violations, such as not wearing a seat belt, are passed to a safety officer who will assign punishment duty to the offender. Many a sandbag was filled in the early days of the war by safety violators, Johnson said.