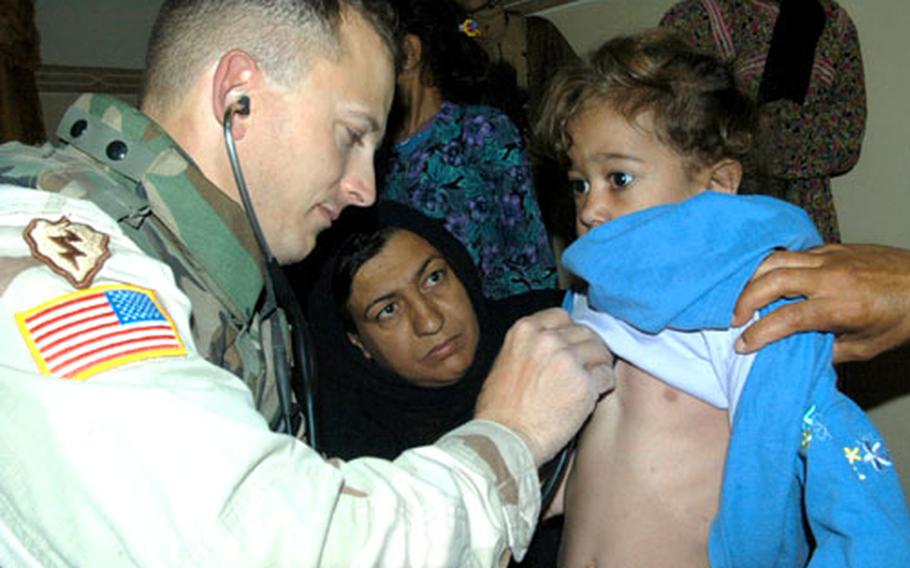 Rhma Taha Ahmed might not have to have her hands and feet amputated after all. And she just might live to a ripe old age.

The 5-year-old Iraqi girl, who suffers from a congenital heart defect, tapped a soft spot earlier this year in some soldiers from 1st Battalion, 24th Infantry Regiment in Mosul.

After an article about the little girl appeared in Stars and Stripes in May, her plight touched off a hailstorm of e-mails across continents which, in less than a month, has prompted a doctor and hospital to perform the surgery and a nonprofit organization to pay all expenses.

The sole sticking point to getting her care in the United States is acquiring non-immigrant visas for the child and her parents, and military personnel are working through official channels to get those.

Once approved, the plan is to bring Rhma to Presbyterian Hospital in Albuquerque, N.M., where Dr. Carl Lagerstrom has agreed to perform the surgery, said Pam English, a hospital employee, who is the mother of one of the 1-24 soldiers.

Preliminary medical reports sent from Iraq indicate Rhma would be a good candidate to have her heart repaired, English said. &#8220;At the very least ... she could have a shunt placed, which would make her pink and probably make her feel much better,&#8221; she said.

Rhma was born with two holes between the upper and lower chambers of her heart, and a ventricle that fails to properly circulate her blood. The tips of her hands and feet have swollen and turned purple, a symptom called &#8220;clubbing&#8221; caused by poor blood circulation.

If not treated, her limbs will die. The pressure imbalance eventually will wear her heart out.

The nonprofit organization Healing the Children will pay necessary costs. It pairs children with medical professionals who donate services and link children to volunteers who provide room and board in the United States, according to their Web site, www.healingchildren.org.

Rhma&#8217;s story is far from unique in a country of more than 10 million children under the age of 15.

&#8220;These congenital heart problems are all too common in Iraq,&#8221; said Dr. (Maj.) Dave Brown, the battalion&#8217;s surgeon. Brown was instrumental in the making connections to get Rhma the needed help to save her hands, feet and possibly her life.

It was during a late-night raid into the Isla Zeral neighborhood of Mosul on May 20 in which Pfc. Matthew Nolan and Spc. Matthew English first came across the pale little girl.

&#8220;This came about because two young soldiers came into a house one night and saw someone less fortunate and in need,&#8221; said Capt. Paul Carron, Company C commander. &#8220;If soldiers have one consistent trait it is problem solving, they see a wrong and they make it right. We all want to see this made right,&#8221; said in an e-mail to Stripes.

&#8220;I saw Rhma two days ago, she is doing well, smiles when she sees us and is getting over her shyness around Americans,&#8221; Carron wrote. &#8220;She cannot play with the other kids due to her condition, but she does venture to the front door whenever she hears our armored vehicles outside. I think she looks forward to our visits.&#8221;

While part of their efforts could help in winning over the population, this mission is about one little girl.

&#8220;We throw candy or stuffed animals to them from the top of a Stryker or we give their schools kerosene heaters or supplies and they are overjoyed,&#8221; Brown said in an e-mail. &#8220;Even though this provides us a pleasant diversion from the realities of the war and earns us the infatuation of the children, it is superficial at best and can change on a whim based on any untoward event.

&#8220;What most of us desire to do is to truly help the children have a better life; we want to make a lasting impact that goes beyond furthering any political or military agenda.&#8221;