Aided by a female squad leader, US soldiers demonstrate peacekeeping with women in mind 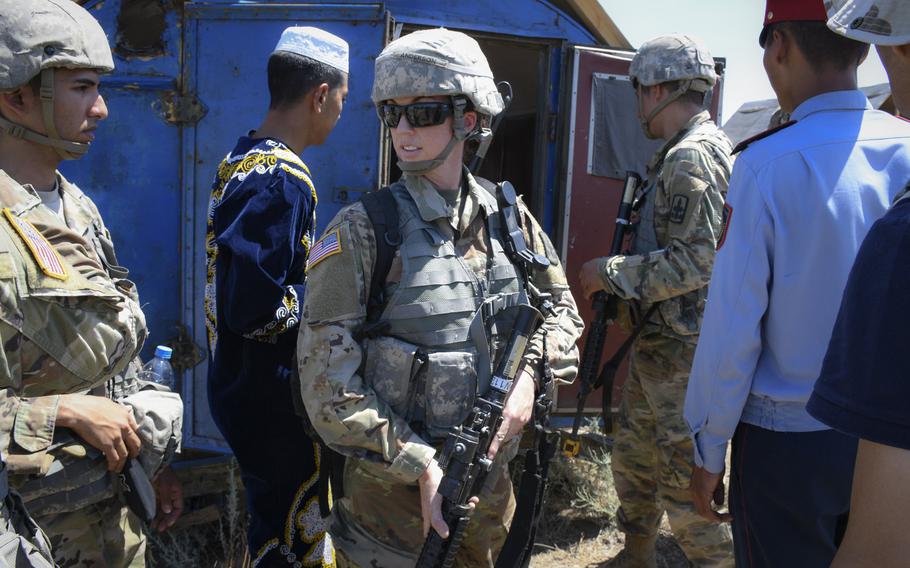 Army Staff Sgt. Jenna Ross, center, leads troops as they search for a weapons cache in a mock village in Chilikemer training area in Kazakhstan during Exercise Steppe Eagle on June 23, 2019. Ross, the first female infantry soldier in the Arizona Army National Guard, is now a squad leader. (J.P. Lawrence/Stars and Stripes)

Army Staff Sgt. Jenna Ross, center, leads troops as they search for a weapons cache in a mock village in Chilikemer training area in Kazakhstan during Exercise Steppe Eagle on June 23, 2019. Ross, the first female infantry soldier in the Arizona Army National Guard, is now a squad leader. (J.P. Lawrence/Stars and Stripes) 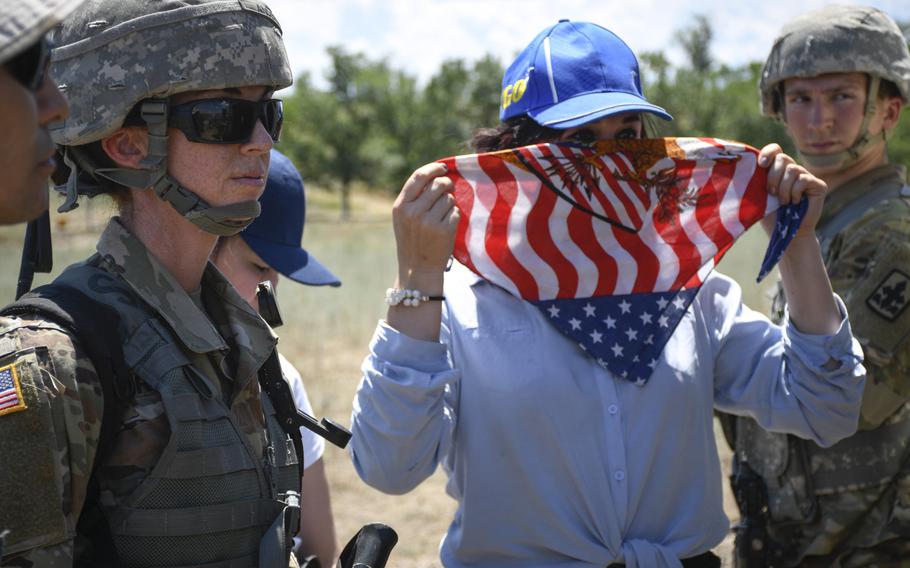 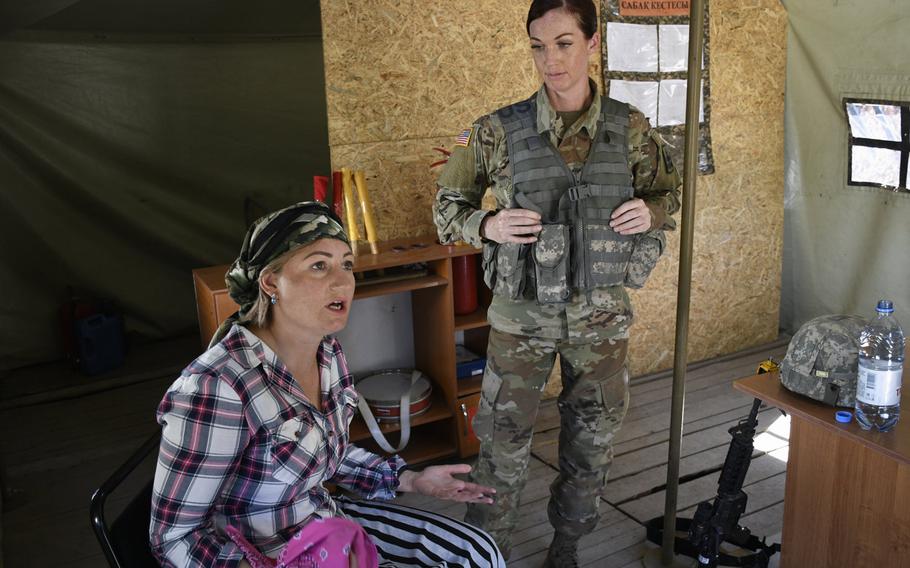 Army Staff Sgt. Jenna Ross, right, talks to a female actor posing as a civilian whose sister has been kidnapped, during Exercise Steppe Eagle in Kazakhstan on June 23, 2019. (J.P. Lawrence/Stars and Stripes) 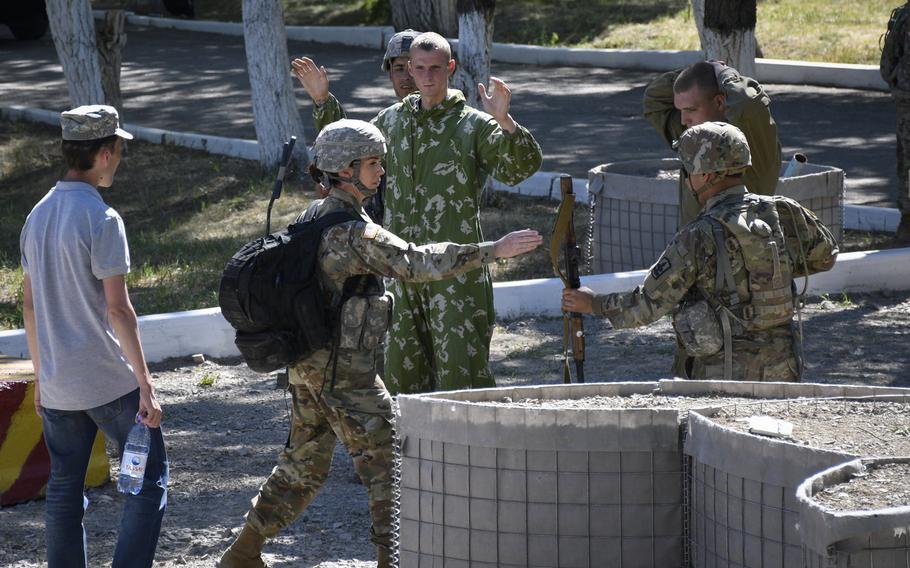 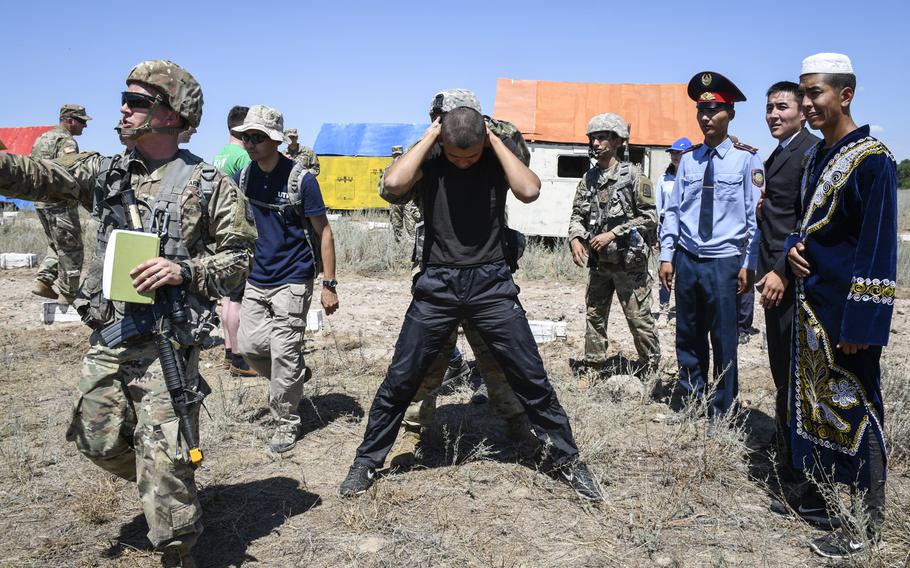 U.S. Army soldiers from 1st Battalion, 158th Infantry Regiment search an actor posing as a villager suspected of hiding a weapons cache, during Exercise Steppe Eagle at the Chilikemer training area in Kazakhstan on June 23, 2019. Steppe Eagle brought together Western and Central Asian troops for training on peacekeeping and stability operations, and included gender-focused training. (J.P. Lawrence/Stars and Stripes) 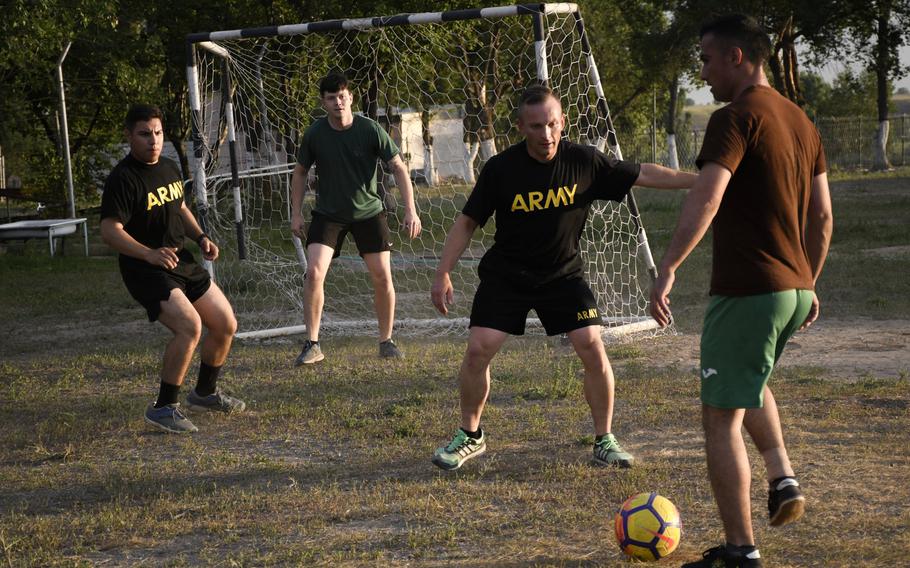 At many of the houses, women acting out the scenario during the Steppe Eagle exercise told the American soldiers that their culture did not allow them to enter unless a female servicemember was present.

That’s where this particular squad of guardsmen stood out: Led by the first female infantry squad leader in the Arizona National Guard, Staff Sgt. Jenna Ross, the squad entered and searched the houses for the hidden weapons.

Not long after starting the searches in the village, Spc. Efren Armenta told Ross, “Jackpot.” He’d found the stash.

The scenario was part of training on how gender can impact peacekeeping and stability operations.

“It’s definitely an asset to have females in the military, specifically in the infantry, because males can’t do certain things in some cultures,” she said.

The weeklong Steppe Eagle exercise involved more than 400 troops from host country Kazakhstan, Kyrgyzstan, Tajikistan, the U.K. and the U.S., with observers from India, Turkey and Uzbekistan.

Several Steppe Eagle drills included gender as a factor. In one, villagers come to the gates of bases to report that they had been raped. Another tested whether soldiers could spot signs that a woman was the victim of human trafficking.

“We looked into how you can integrate a gender perspective into the full planning process,” Simpson said.

Kazakhstan’s ground forces are due to deploy later this year to Lebanon to serve on the U.N. peacekeeping mission. The focus on gender at this exercise comes as other peacekeeping units have faced accusations of rape and sexual misconduct in Bosnia and several parts of Africa.

U.N. Secretary-General Antonio Guterres pledged to make ending the “scourge of sexual exploitation and abuse committed by UN personnel, including peacekeepers” a priority of the global body.

'A novelty’ Ross enlisted in 2009 and has spent her career working as a medic and recruiter, with a stint as a drill sergeant. She joined the infantry last year to challenge herself, she said.

In November, she attended an Advanced Leader Course for infantry sergeants and learned how to be a squad leader.

“There were no other females,” Ross said. “I was a novelty for the instructors.”

Ross acknowledged she had a lot to learn about being an infantry squad leader. She has adopted a humble but determined leadership style, she said.

“I’m not the type to give up or quit very easily. I’m stubborn to a fault,” Ross said, offering advice on what women can expect if they, too, join the infantry — which Ross hoped they will.

When she first came to her unit, Ross said, some of the men mistook her for a victim’s advocate for sexual harassment, assault response and prevention. She has also noticed generational differences regarding attitudes of women in combat roles.

All military services were ordered in 2013 by then-Defense Secretary Leon Panetta to lift a long-standing ban on women in combat roles. The services were given until January 2016 to fully integrate or ask for special exemptions.

Prior to the ban being lifted, the Army and Marine Corps barred women from jobs in combat arms, including in the infantry, artillery and armored divisions. The Air Force and Navy had greater gender integration but women were excluded from special operations units.

Since 2016, the Army has transferred more than 1,000 women into combat arms specialties and at least 500 women now serve in each of the service’s active brigade combat teams, Army Lt. Gen. Thomas Seamands said in a statement last month.

There are currently no other female infantry soldiers in the Arizona National Guard, Ross said, but she hopes others will join her.

“I’m excited to be part of a movement that’s nationwide,” Ross said.