Aide a big hit with toddlers and Library of Congress 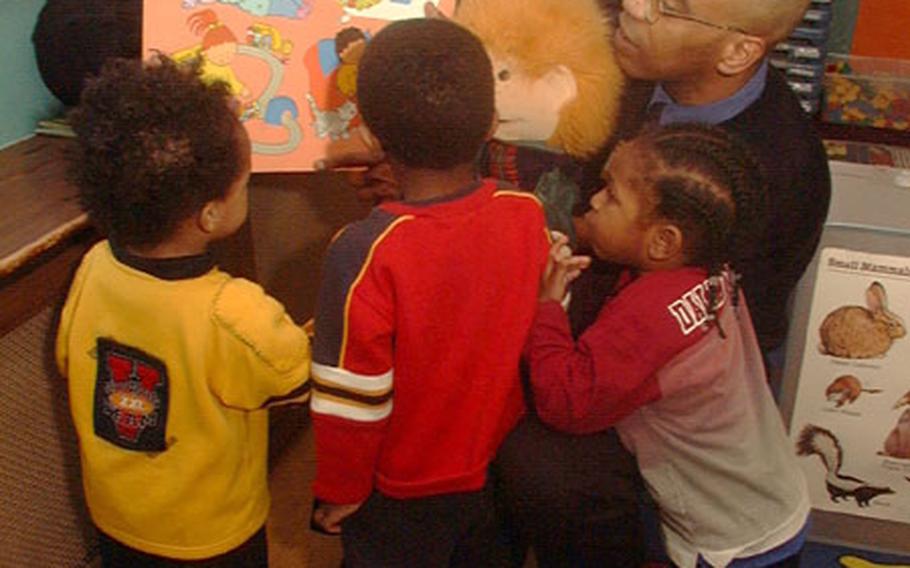 Reginald Stewart, a library technician for the 284th Base Support Battalion in Giessen, Germany, and his friend "Reggie" treat some toddlers to a story at a day care center in the nearby town of Butzbach. Stewart, a retired soldier, is the recipient of a Library of Congress award that will be presented to him on March 19. (Kevin Dougherty / S&S)

Reginald Stewart, a library technician for the 284th Base Support Battalion in Giessen, Germany, and his friend "Reggie" treat some toddlers to a story at a day care center in the nearby town of Butzbach. Stewart, a retired soldier, is the recipient of a Library of Congress award that will be presented to him on March 19. (Kevin Dougherty / S&S) 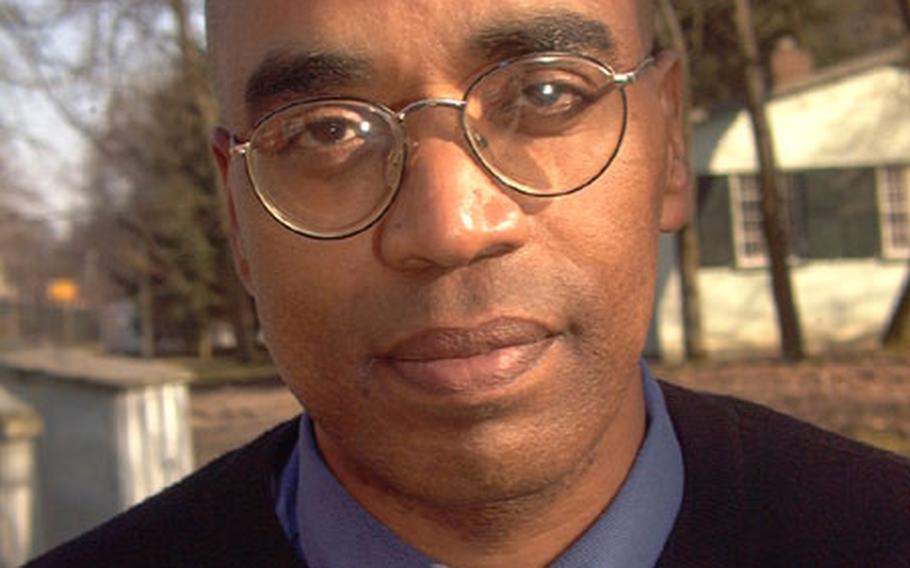 BUTZBACH, Germany &#8212; Childish cheers greet Reggie and the bespectacled storyteller as they near the front door of an American preschool.

Well, the Giessen library aide says, that depends on your point of view.

A few minutes later, Reggie &#8212; a lovable-looking hand puppet &#8212; sits atop Stewart&#8217;s right knee gazing at his audience. He fields the questions while his master massages the imaginations of several preschoolers.

Reggie may fuel their fancy, but it&#8217;s Stewart who catapults a child&#8217;s creativity to new heights.

Some grown-ups back in Washington think he&#8217;s special, too.

A committee of the Library of Congress has selected the 42-year-old retired Army sergeant as its Federal Library Technician of the Year for 2002. An awards banquet is scheduled for this week in Washington.

In addition to Stewart, the Library of Congress will recognize M. Ann Parham, who oversees the Army library program worldwide. An Army librarian in South Korea and West Germany in the 1970s and 1980s, Parham was chosen by the committee as the Federal Librarian of the Year for 2002.

Established in 1998, the Library of Congress awards recognize library excellence at the federal level. That means the pool of nominees hail from all branches of the military as well as dozens of federal agencies, such as the U.S. Department of State.

Floyd, who won two years ago for her work in Bosnia and Herzegovina while assigned to Vicenza, Italy, has collaborated with Stewart in the past. She said the mild-mannered library assistant is a worthy recipient.

One of six children, Stewart was born in Los Angeles but was raised on the south side of Chicago. At an early age, he displayed a flair for the arts and music, learning, for example, to play the violin while attending a private Catholic elementary school.

&#8220;My mom always said I was a writer, not a fighter,&#8221; Stewart recalled as he prepared to leave the library in Giessen for his Butzbach booking.

Maybe so, but the shy guy from Chicago was drawn to the art of war.

While his older brother, John, went to West Point, Stewart decided to enlist in the Army after graduating from high school. Stewart served for 17&#189; years, mostly in tank units, before accepting early retirement in 1995.

Two years later, Stewart began his second career as a library technician for the 284th Base Support Battalion. He worked in Friedberg and then moved to the unit&#8217;s main library in Giessen, where he works for Ann Burski.

Burski nominated Stewart for the award, but didn&#8217;t tell him. Last month, when she broke the news to him before a small audience, Stewart had tears in his eyes &#8212; not because of the award but because of Burski&#8217;s endorsement.

Burski believes Stewart is more than worthy. For starters, she said, Stewart&#8217;s work habits are impeachable: He&#8217;s never idle, never late, always personable to customers, always looking to improve service, flexible at work, a team player and quick to volunteer, whether it&#8217;s for the library or community.

Although he has only been at the Giessen facility a few years, Stewart has left his mark. Consider the Army&#8217;s formal announcement of his award:

&#8220;Mr. Stewart was selected for developing and implementing a creative children&#8217;s outreach program using a story-mobile that he built from an old bus. He visits military communities around Giessen in the story-mobile, where he does story hours and puppet shows for the children.

&#8220;In addition, Mr. Stewart personally opened and repacked 1,500 boxes of books [45,000] from the Augsburg library that had been stored since 1997. The books were redistributed among Army and DODDS libraries in Giessen and Friedberg. Mr. Stewart was also instrumental in bar coding and linking 30,000 items in the Giessen and Friedberg collections in nine months, thus bringing the last two libraries in Germany online.&#8221;

To others in the community, there is no question about who should be getting thanks.