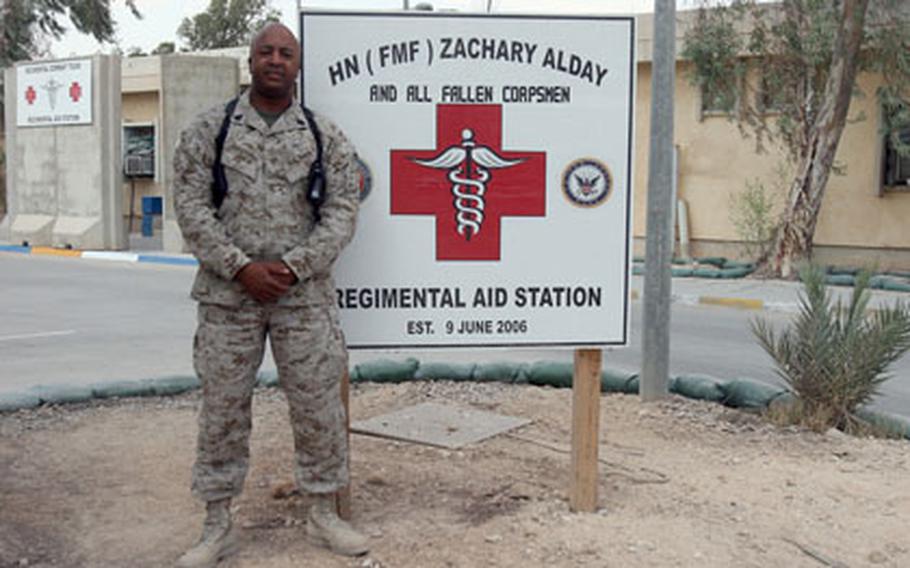 Like a father mourning dead children, his heart aches each time he passes the wall that honors their names in the hallway of the regimental aid station.

The names, more than 50 of them, are those of U.S. Navy hospital corpsmen serving with U.S. Marines, and killed, nearly all of them by enemy action, in Iraq or Afghanistan.

Their names are on a wall in a corridor of Regimental Combat Team-2&#8217;s aid station at Camp Ripper, on Al Asad Air Base in Iraq&#8217;s western Anbar province. A sign outside the tan, one-story building gives its name: &#8220;HN (FMF) Zachary Alday And All Fallen Corpsmen Regimental Aid Station.&#8221; Alday was killed in June 2006 while serving with Marines in Anbar province.

Inside, at one end of the white-walled aid station&#8217;s corridor, a section of wall bears some of the names under color photographs of the dead, while other names are painted on the wall in black lettering inside a scroll design. A legend reads: &#8220;In memory of our fallen Corpsmen who made the ultimate sacrifice while honorably serving their country.&#8221;

Navy hospital corpsmen are embedded with U.S. Marine units and serve with them in combat.

Traditionally referred to by the Marines as &#8220;Doc,&#8221; the corpsmen are widely respected by the Marines, and have a longstanding reputation for their bravery and skill in tending to wounded Marines under fire.

He can barely speak of them without tears.

A look of sober reverence comes into their faces, he said.

Those deaths, he says, serve partly as a reminder that military service can have life-and-death consequences for servicemembers, including those young corpsmen under his charge.

&#8220;It&#8217;s not only corpsmen that we see every day&#8221; at the regimental aid station, but those serving with Marines elsewhere around western Anbar.

He tells his subordinate leaders they have a grave responsibility to look out for the corpsmen under them.

Remember those corpsmen who&#8217;ve given their lives, he tells them. In life, they were eager to &#8220;be living their lives and doing all the things we are doing.

&#8220;I have all of them look&#8221; at the names and photos on the wall, including those in line for promotion to noncommissioned officer rank.

In daily huddle, tribute made for the fallen

Displaying on a wall the names of U.S. Navy hospital corpsmen killed in Iraq and Afghanistan isn&#8217;t the only way their fellow corpsmen at Camp Ripper, Iraq, honor the memory of the dead.

Each day after their morning run, the corpsmen at the Regimental Combat Team-2 aid station, also pay them tribute.

With their hands placed over one another&#8217;s football style, one of the corpsmen may say aloud the names of some of the dead.

There may also be a prayer if one of them wants to offer one, Amarh said.