Aid at the crossroads: USAID’s Afghanistan chief talks development in a volatile landscape 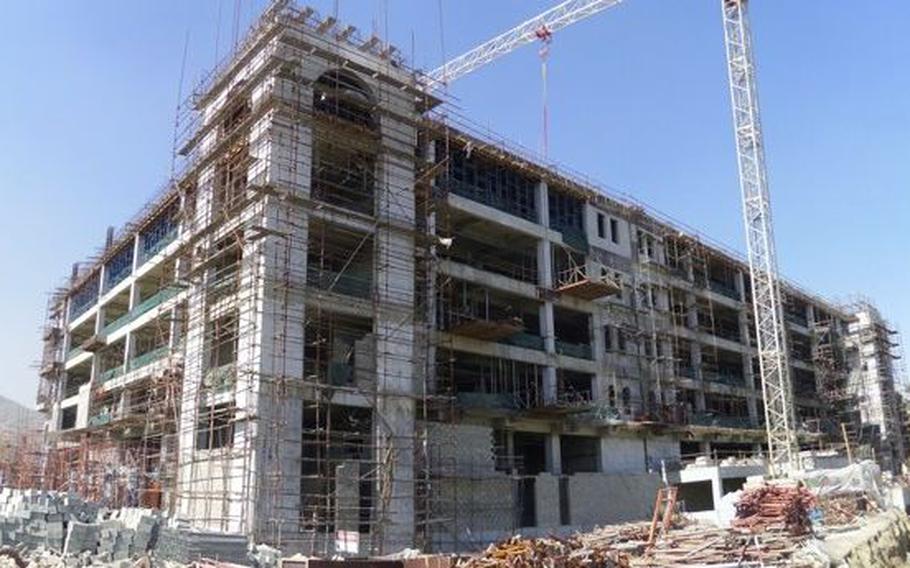 Construction site of the Ministry of Defense in Afghanistan. The United States is spending $92 million to build Afghanistan a new "Pentagon," a massive, five-story military headquarters with domed rooves and a high-tech basement command center that will link Afghan generals with their troops fighting Taliban across the country. (NATO Training Mission Afghanistan )

Construction site of the Ministry of Defense in Afghanistan. The United States is spending $92 million to build Afghanistan a new "Pentagon," a massive, five-story military headquarters with domed rooves and a high-tech basement command center that will link Afghan generals with their troops fighting Taliban across the country. (NATO Training Mission Afghanistan ) 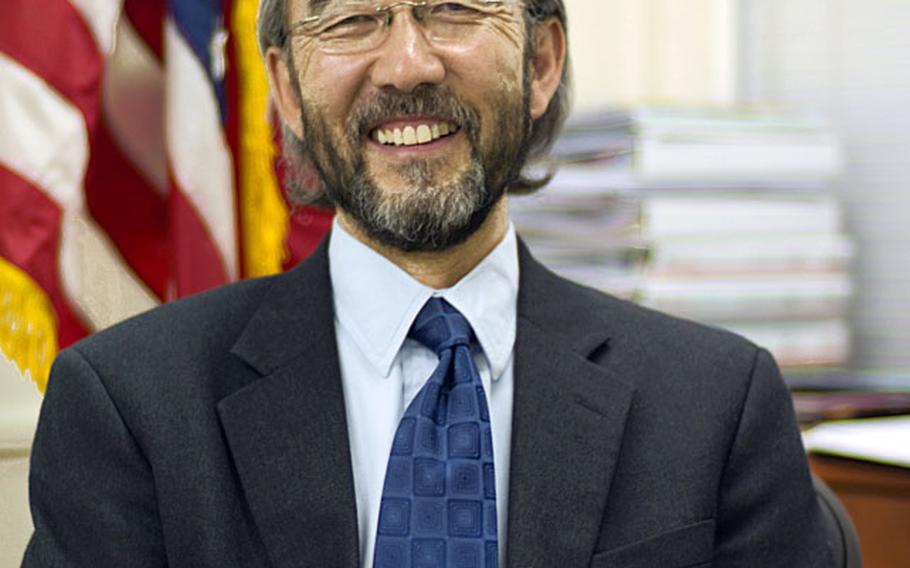 S. Ken Yamashita, director of USAID in Afghanistan, sat down with Stars and Stripes to talk about development in Afghanistan, and how the post-combat environment will change their approach. (Courtesy U.S. Agency for International Development)

KABUL, Afghanistan &mdash; Aid organizations in Afghanistan have recently been hit with allegations of wasteful spending and unsustainable projects. The U.S. Agency for International Development, which since 2002 has spent more than $13 billion in taxpayer money in Afghanistan, has even been criticized for not guarding against contractors engaging in human trafficking.

USAID is the American government&rsquo;s main conduit for international aid. Stars and Stripes sat down with USAID&rsquo;s Afghanistan director, S. Ken Yamashita, to discuss the challenges of delivering aid past 2014, when all combat troops are scheduled to leave, missteps made in the fervor to build projects amid heavy fighting and the challenges of delivering aid that can be sustained by an Afghan government struggling to stand on its own. (The transcript has been edited for space.)

Stars and Stripes: USAID, as well as the broader aid community, has taken criticism for creating unsustainable projects, and for a lack of vision. How do you respond to those criticisms, and are there things you are looking to do differently?

Yamashita: One of the criticisms is [that] roads are not sustainable. On the other hand, roads are necessary, so where&rsquo;s the sweet spot? A lot of times it comes down to, do you need a Cadillac or do you need a Volkswagen? Do you need a road that is paved to Western European standards in terms of thickness of the asphalt, or do you need a crushed gravel road?

Frankly, it&rsquo;s a bit of a judgment call. Is it the road of tomorrow that lasts 10 to 15 years &hellip; or do you just build the road that&rsquo;s needed for the next three years? I don&rsquo;t think there&rsquo;s a good answer to that &hellip; I think that in either case it&rsquo;s important to ask, if we build it, a) will they use it, and b) will they maintain it?

Early on [in the war], the discussion was &mdash; remembering the conditions that existed at the time: either no roads, or roads totally destroyed by the conflict and a need to have a sense of connection within and amongst the communities to fight the insurgency initially &mdash; we said, understanding that we&rsquo;re taking a bit of a risk, &ldquo;Let&rsquo;s just build the roads.&rdquo;

We have some examples where that did not work out. One of the ones we saw was a project called Strategic Provincial Roads and there, the hypothesis was that even as we [build], we get the community involved. We were not able to get the community buy-in. The violence increased, and we were not able to build the roads. We&rsquo;ve definitely had examples where those things did not work out but in other parts it did work out.

Stars and Stripes: Expand on USAID&rsquo;s approach to development in Afghanistan from here on out.

Yamashita: We&rsquo;re beginning to end our support for major infrastructure &mdash; actual bricks and mortar infrastructure. There are a few we are committed to completing &mdash; Kajaki [dam], the Khost-Gardez road. We will continue to stay engaged in the energy sector because it is so instrumental to growth in the future.

We will be involved [in Afghanistan], we&rsquo;re confident, for the next 10 years.

[Early on] our strategy was very much a wartime, conflict, post-conflict strategy up until now and our strategy going forward is about sustainable development &hellip;The nuts and bolts of how that switch takes place is complicated.

Stars and Stripes: That must be a tough transition now because the war is changing but there still is a lot of violence, still plenty of areas with a lot of fighting. How do you go to a post-conflict strategy while that is ongoing?

Yamashita: I think it needs to be gradual &mdash; we need to have patience with it. We also need to recognize that there will be occasions where we will need to backtrack. It is not &hellip; cleanly sequential. Our working hypothesis and our goal is to, even as we go back and forth, the overall trend is moving forward.

Stars and Stripes: Not knowing what the security situation is going to look like in 2014, are you worried about USAID&rsquo;s ability to operate after combat troops leave?

Yamashita: Obviously we are always concerned about security. We would like to have no one hurt in our development activities. That said, the reason we are reasonably confident about being able to do our work is that we constantly modify our modalities. We have activities in so many countries that are post-conflict today, whether it be the Phillipines, Sri Lanka, Congo &hellip; and we look at conditions on the ground and we structure our programs accordingly.

Stars and Stripes: It sounds like the next few years are going to be crucial to how you operate in 2014.

Yamashita: I can absolutely guarantee you one thing, and that&rsquo;s that [the way we operate is] going to be very different but I&rsquo;ll hesitate if you ask me how different.

Stars and Stripes: You used to work in Colombia. Was there anything you learned there that translates to the counternarcotics program in Afghanistan?

Yamashita: The thinking [in Afghanistan] was, we&rsquo;re going to give you another crop to substitute for [poppy]. Guess what? Hard to find [a substitute crop] on a volume, dollar-to-dollar basis.

Now we are looking at livelihoods, which is more than just a change in title. It&rsquo;s really the concept that says, what the farmers are looking for is a livelihood that gives them a reasonably respectable life, reasonably peaceful and stable, and they&rsquo;re able to raise their families in an environment and community that is not going to be totally taken over by non-state actors, in this case narco-traffickers.

What we find is, the farmers saying the issue is not, do I literally get the same dollar? The issue is, am I going to be able to raise my family in a reasonably safe environment; am I not going to be harassed either by the government of the narco-traffickers.

One of the pieces I saw in Colombia that is still very much a work in progress [in Afghanistan] is the government&rsquo;s ability to push on the counternarcotics front. The [Colombian] government and the counter-narcotics forces are really world class, and I think Afghanistan will get there but it&rsquo;s still a capacity-building piece.

Stars and Stripes: You look at the poppy production numbers and there hasn&rsquo;t been much of a dent made in the past 10 years. What reasons do you see for the lack of success in combating poppy and are you optimistic for the future?

Stars and Stripes: In the current climate, how do you balance immediate goals with sustainability?

Yamashita: What keeps me up at night on this particular issue is do we have the right structure, both in terms of the AID part and government part to address these longer term sustainability matters?

When we say we need enable small and medium enterprises to have access to loans what exactly does that mean? I could mean, for example, something critical, but something often not thought of. Can women walk into a bank by themselves, open an account and get a loan? In many parts of Afghanistan the answer is, not yet. How do we change that and if we&rsquo;re going to change that, are we talking to the right people to make that happen?