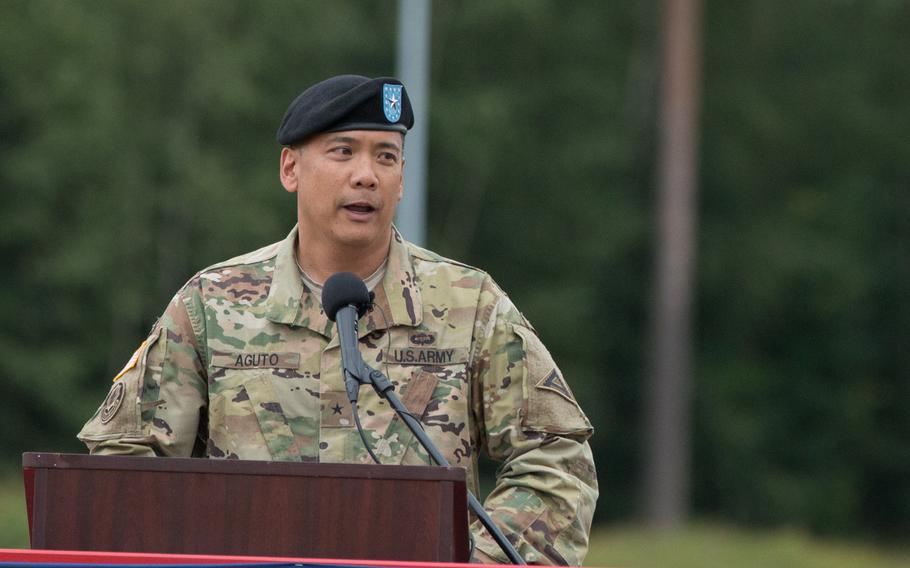 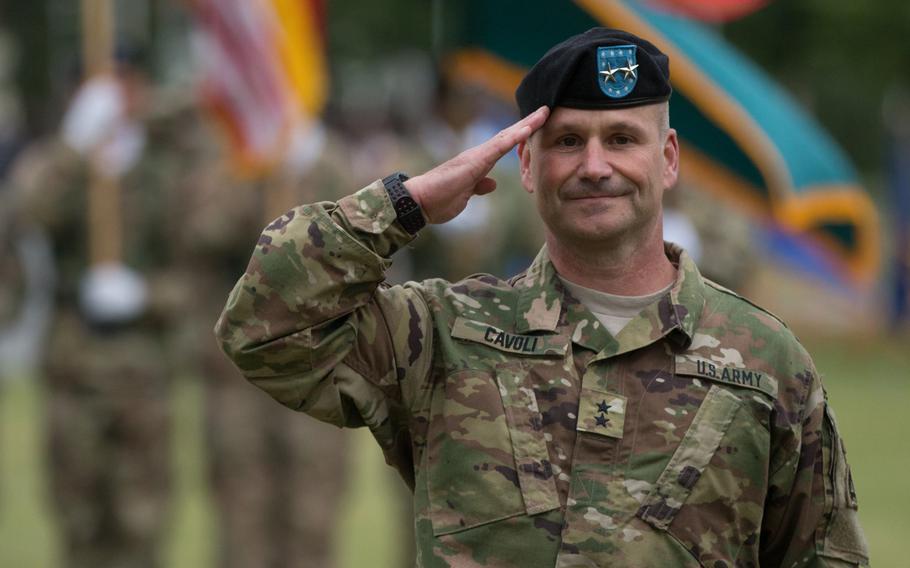 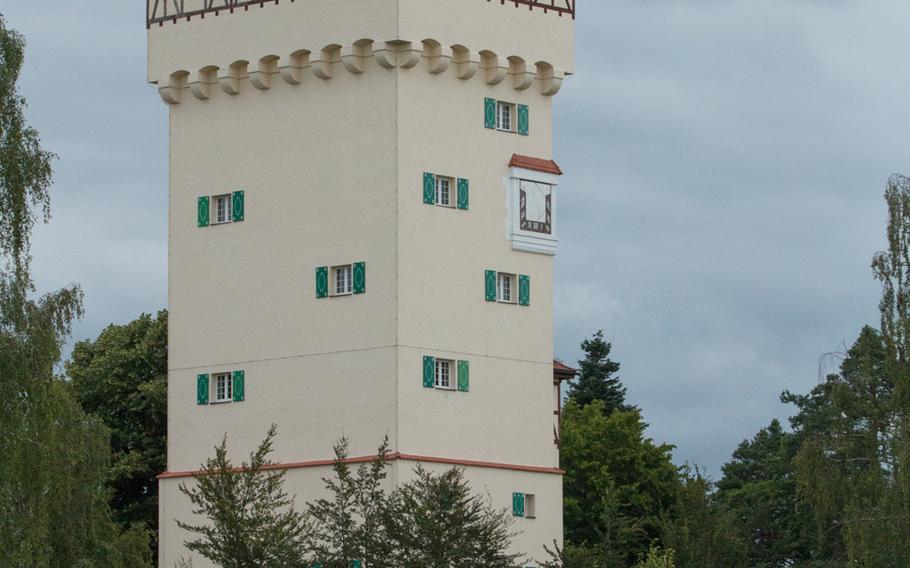 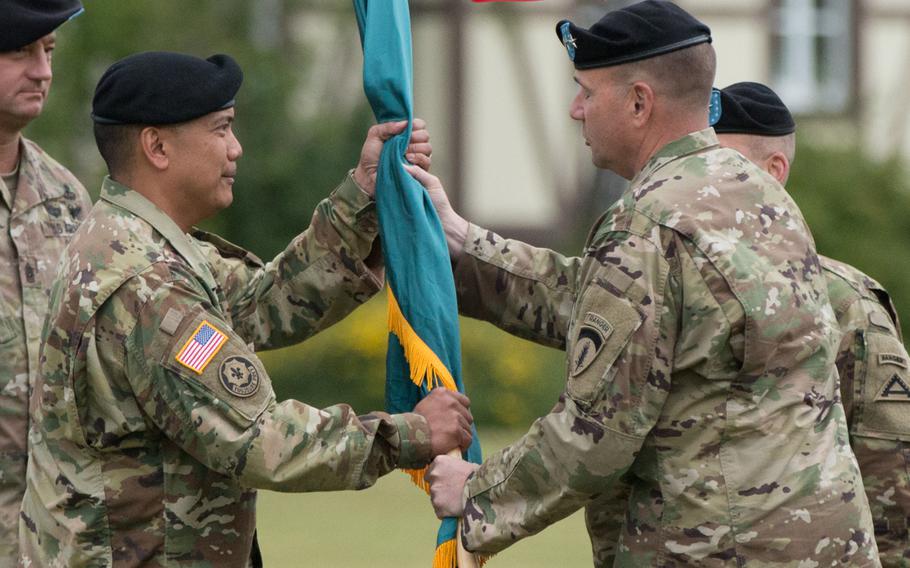 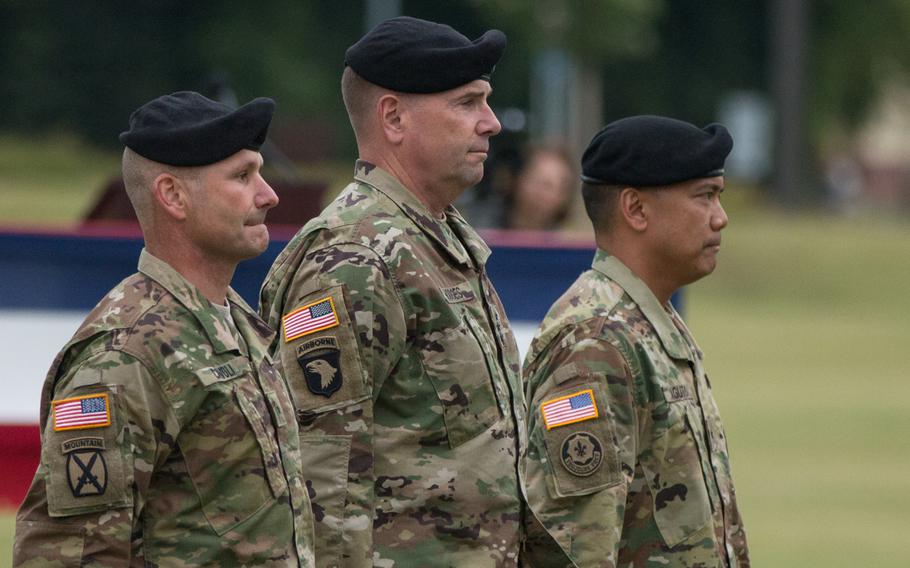 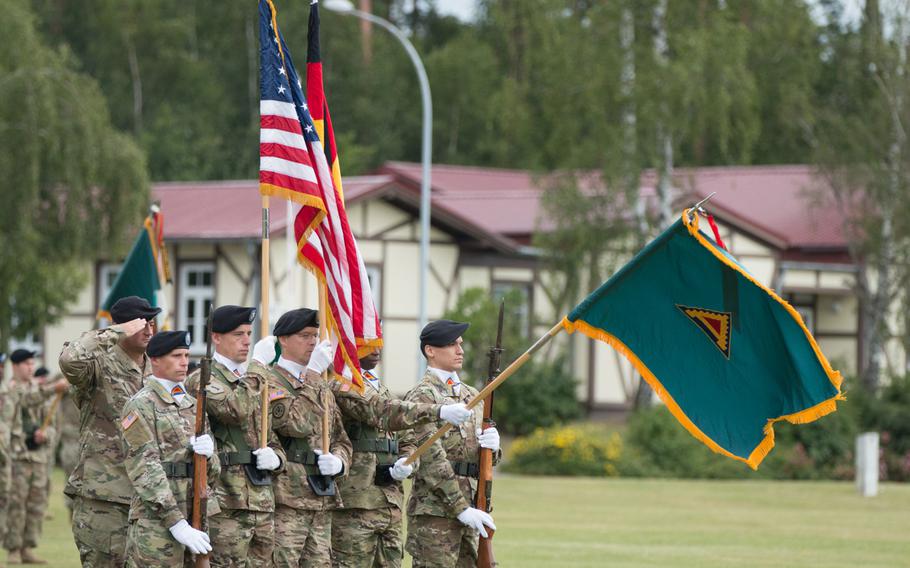 It’s a sentiment commonly expressed by inbound commanders. It’s also one that isn’t as often repeated years later when those same leaders are preparing to leave for other commands.

Not so with Cavoli, who handed command of USAREUR’s newly rechristened 7th Army Training Command to Brig. Gen. Antonio A. Aguto during a ceremony Friday.

“If I could keep doing this for another five years, I would,” he told Stars and Stripes.

“I got to travel all over and I will remember many, many awesome moments with our other allies as well. Snowmobiling way north of the Arctic Circle in Norway, sitting on drop zones in Italy, driving the length of Serbia: You name it, I had the opportunity to do it. It’s been wonderful”

In taking over for Cavoli, Aguto returns to familiar territory. Just six years ago he served as a squadron commander with the Vilseck, Germany-based 2nd Cavalry Regiment.

“This community holds a special place in our hearts,” he said in his welcome address on Friday. “It was here in the heart of Bavaria that we were shown the warmth and hospitality of our neighbors, and we are honored — yes, honored — to be given the chance to serve once again.”

Cavoli will now take command of the 25th Infantry Division in Hawaii. He leaves behind a command for which he seemed singularly well-suited.

A speaker of four languages — including Russian, Italian and French — Cavoli has an extensive background in foreign affairs that made him a prime choice to lead a training command whose focus is building international relationships.

Russia’s annexation of the Crimean Peninsula in February 2014 sent shock waves across the European theater. Until then, much of JMTC’s time was spent selling its services to the militaries of NATO and other U.S. allies.

“Everything happens in its time. There was a period where the important thing was to get people here,” Cavoli said.

After Moscow’s intervention in Ukraine, that all changed. Practically overnight, JMTC’s training facilities were in high demand as the U.S. and its allies scrambled to sharpen conventional-warfare skills dulled after more than a decade of counterinsurgency warfare.

In Europe, much of that training was facilitated by the JMTC under Cavoli’s command. His team oversaw or facilitated more than a dozen major training exercises and more than 50 smaller events. These included the joint airborne insertion exercise Swift Response, which he had a major part in creating.

“As we came out of Iraq and Afghanistan, we ascertained that the world still had big armies in it and the need to do combined armed maneuvers to defeat those armies if necessary was still there,” Cavoli said. “But we hadn’t been practicing it for some years. So we returned that sort of function — that is, combined arms maneuver.”

JMTC had to juggle the drawdown of America’s presence in Europe with a shift in the type and frequency of training it was asked to provide. Balancing those elements was among Cavoli’s biggest challenges, he said.

“I think it’s critical to the functioning of our alliance because I think our alliance has become more focused on the tactical level of war,” he said. “It’s become more urgent because of recent events. Those two things together play right into the sweet spot of this command.”

Those challenges aren’t likely to diminish for Aguto, fresh off his assignment with the 7th Infantry Division at Joint Base Lewis McChord, Wash.