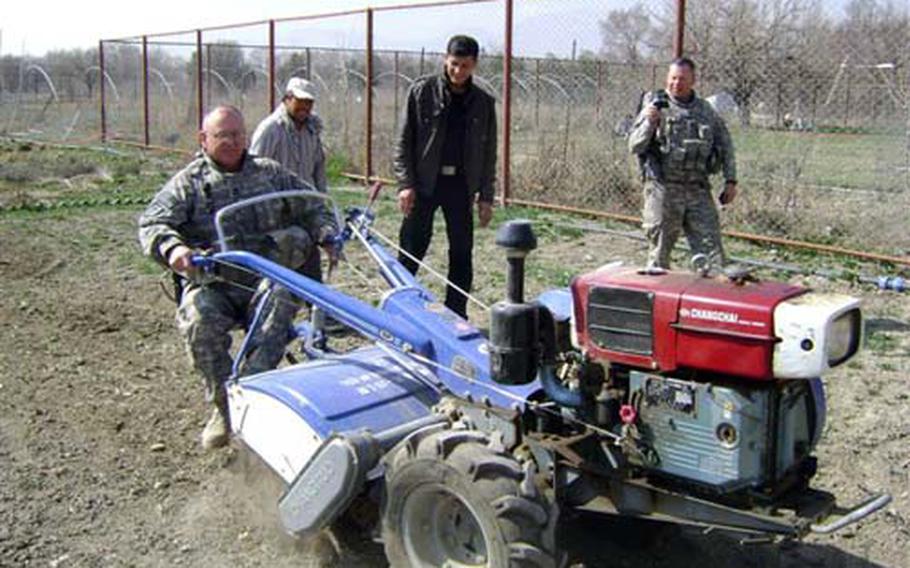 BAGRAM, Afghanistan &#8212; Master Sgt. John Herron was visiting a remote part of Afghanistan&#8217;s Panjshir province when a group of children came running up to him. That in itself wouldn&#8217;t be unusual, except that he hadn&#8217;t been to this area before and the children knew exactly who he worked for. They recognized the ear of corn on his unit patch and knew immediately that Herron and the other Nebraska farm boys he works with were the American soldiers who&#8217;d been helping Afghan farmers grow more food.

Agriculture is the main source of income for the majority of Afghans, yet it has so far received a miniscule portion of the country&#8217;s development money. Much of the money that has gone toward short-term or unsustainable projects such as distribution of seeds, tools, and fertilizer.

The Nebraska farm boys with Forward 28 Agribusiness Development Team are part of the military&#8217;s effort to change that. The Bagram-based team became the third ADT to start work when it arrived in Afghanistan in October, following teams from Missouri and Texas. The five teams now in the country will grow to 11 teams by the end of the summer.

The National Guardsmen bring with them specialization beyond the usual advisory qualifications. Everyone on the 51-member team volunteered for the job, with the seven Guardsmen serving as advisers all having some form of farming, ranching or other agricultural know-how. One of them is even a beekeeping expert.

Focus on the long term

Their military capabilities give them an ability to move around the country without drawing manpower from other units, while they have the technical knowledge to proffer advice on the most complex subjects.

"We can actually sit down and talk about the physiological makeup of a plant. I&#8217;m not sure they teach that at the War College," said Master Sgt. Colin Jones, the team&#8217;s top noncommissioned officer. Jones, now a full-time Guardsman, was once a farmer and an agronomist.

The team focuses on education and long-term projects. A representative plan calls for teaching a small group of Afghans how to spray for pests without harming plants or helpful insects. The team will help the Afghans for a season, but the focus will be on teaching them to build a business that will pay for itself in seasons to come.

Even direct agricultural help is more long term. The unit has partnered with a nonprofit to distribute 10,000 cherry trees and 10,000 apricot trees, said Herron. Along the way, they&#8217;re teaching the farmers how to graft, so they can grow the orchards even bigger. The project is predicted to quadruple the income of participating farmers.

The Bagram team has so far spent a comparatively modest $3 million because of its focus on doing only sustainable projects. Team members say they could easily spend $15 million if all they cared about was short-term gains.

They face formidable difficulties, though. Afghan farmers lack technology such as refrigeration that allows American farmers to avoid dumping their product on the market all at once, said Sgt. 1st Class Eldon Kuntzelman. Pakistani buyers purchase Afghan produce when it&#8217;s ready for harvest and store it in their own country. When Afghanistan starts to run short of food later in the season, the Pakistanis ship the produce back to Afghanistan and sell it with a large markup.

"It is truly like stepping back in time," Jones said. "The first guy I saw planting his field with oxen and a plow, I wrote my grandma saying I knew what she&#8217;s talking about."

Years of war have also prevented experienced farmers and ranchers from teaching the best procedures to the next generation. Vaccinations are haphazard. Grapes are grown on the ground instead of on trellises. Ranchers deworm cattle by digging a hole in the ground, filling it with the medicine and walking the cows through the solution &#8212; a process that American ranchers a hundred years ago would recognize.

Kuntzelman said he&#8217;d consider it a success to help the Afghans reach a 1930s level of proficiency. They even plan to teach the Afghans to build simple, pioneer-era root cellars to keep their produce fresh a bit longer until permanent refrigeration facilities can be built.

This isn&#8217;t a fast process. The fruit tree project won&#8217;t produce cherries and apricots for two more years. The farmers will plant wheat between the trees in the meantime, but it&#8217;s not always easy convincing people accustomed to the vagaries of war to plan for the future. Livestock herders, for example, often allow their animals to eat all the grass on the field rather than leaving some of it to reseed the area for next season.

The team is also slowed by the area it covers. It is responsible for Parwan, Panjshir, Kapisa and Bamiyan provinces &#8212; the largest area among the ADTs. This has forced them to focus on improving a concentrated area and hope that subsequent teams expand their efforts.

"In some aspects, they&#8217;re still trying to figure out what to do with us," Jones said.

The challenges haven&#8217;t dampened the spirits of these farm boys, though. They&#8217;re happy just to spend their days sharing tips with Afghan farmers. "It&#8217;s almost like hanging out with your buddies back home &#8212; instead of having a beer, you&#8217;re having tea, or chai," Jones said.

Farming receives little aidAgriculture is the main source of income for 70 percent of Afghans, according to Oxfam International, an anti-poverty organization. But years of war have cut the amount of irrigated land by 40 percent since the Soviets invaded in 1979.

Huge portions of the population are vulnerable to food shortages, while their heavy reliance on grains means many have protein deficiencies. Meat is low quality and many animals are underfed.

Despite these problems, agriculture has so far received a miniscule portion of Afghanistan&#8217;s development money. In January 2008, Oxfam estimated that $300 million to $400 million of the $15 billion in aid that Afghanistan received &#8212; a paltry 2 to 3 percent &#8212; went toward agriculture development.

At the same time, much of the money that was spent went toward short-term or unsustainable projects such as distribution of seeds, tools, and fertilizers, according to a National Defense University study.