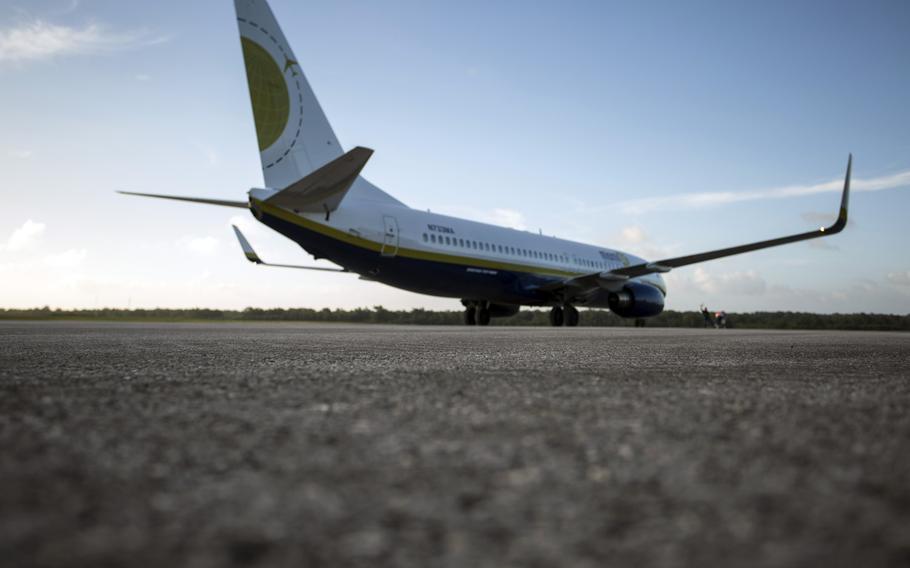 A Boeing 737 carrying about 100 U.S. Marines lands Nov. 6, 2013, at Tinian's international airport as part of the beginning of exercise Forager Fury II. The Air Force intends to use the airport as a divert field. (Antonio Rubio/U.S. Marines)

Officials from U.S. Pacific Command and the island of Tinian signed an agreement Friday establishing a divert airfield in the American territory.

The agreement was signed by Ralph Torres, governor of the Commonwealth of Northern Mariana Islands, and PACOM Deputy Commander Lt. Gen. Anthony Crutchfield.

The U.S. initially wanted the divert airfield on the nearby island of Saipan, but the proposal met public opposition.

A divert airfield can be used for emergency landings or when a main or redeployment airfield is not usable or needed for tactical operations. Such an airfield needs to be equipped with a minimum level of capabilities.

“The divert initiative in CNMI will create the only divert airfield in the Western Pacific and provide the U.S. Air Force the capability to conduct either temporary or sustained refueling operations from an additional location in the region,” Gen. Mark Welsh, chief of staff of the Air Force, said in a Defense Department statement in February, when the choice of Tinian was announced. “It will also give us another location to use when supporting contingency or natural disaster responses in the region.”

The infrastructure of the Tinian airport will be upgraded to support up to 12 tanker aircraft and all support personnel needed for divert operations. Regular exercises will take place at the airfield, up to eight weeks each year.

U.S. Rep. Gregorio Kilili Camacho Sablan, who represents CNMI, said in a statement earlier this year that the Air Force included $9 million in its military construction budget request to lease about 18 acres for the divert activities.

During a news conference Thursday, Crutchfield said the initial agreement underwent more than 40 changes, reflecting issues raised by the governor and Tinian residents. Some of those issues were referred all the way up to the secretary and deputy secretary of the Defense Department, he said.

Crutchfield said a final environmental impact study of the project would now commence, with completion expected by August, followed by the final record of decision in September.

A copy of the agreement has not yet been released to the public.

The governor’s office told local media, however, that part of the agreement lays out specific steps that will be taken if historical or archeological artifacts are found at Tinian West Field.