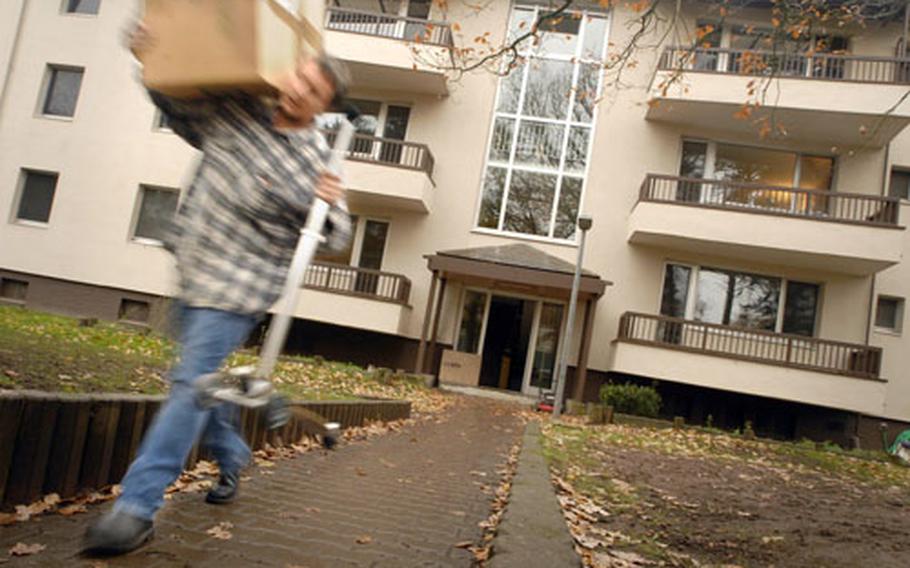 Michael Kapeller loads a truck with the belongings of Staff Sgt. Brad Ritchie, a member of the 435th Material Maintenance Squadron, during his recent move out of Sembach Air Base housing. (Ben Bloker / S&S)

Michael Kapeller loads a truck with the belongings of Staff Sgt. Brad Ritchie, a member of the 435th Material Maintenance Squadron, during his recent move out of Sembach Air Base housing. (Ben Bloker / S&S) 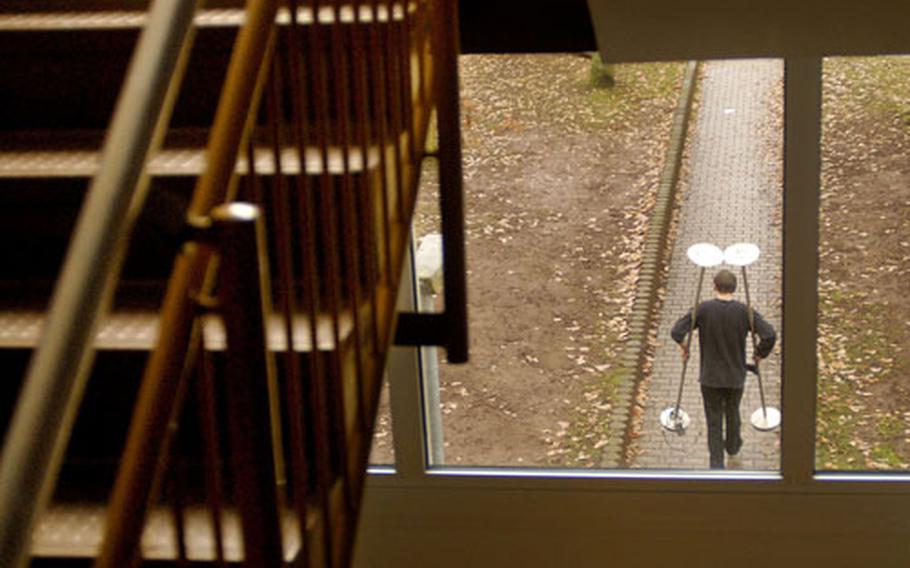 SEMBACH ANNEX, Germany &#8212; Four months ago, the apartments at this military base north of Kaiserslautern were full of U.S. servicemembers and their families.

Now, the housing area is almost a ghost town since the Air Force began moving the remaining families out of the units, which are deemed inadequate by military standards.

The playgrounds, including those built less than two years ago, are empty. Balconies are barren of furniture and plants. Hundreds of parking spaces are empty, just like nearly every housing unit.

Air Force Staff Sgt. Brad Ritchie and his family are among the last families forced to leave the housing area. He arrived in August 2000 to a neighborhood full of families and plenty of traffic.

The Air Force decided to stop moving families into the housing area about two years ago because it was considered substandard and the service didn&#8217;t need it, said Karen Largent, housing director for the Kaiserslautern military community. Families have remained in the homes until their scheduled transfers to another base.

The Air Force isn&#8217;t sure what it is going to do with the empty apartments.

Joe Dunkle, deputy commander of the 435th Civil Engineer Squadron, said an analysis to be conducted next month would determine what to do with the buildings. They could be demolished, turned over to the German government or refurbished for a different use. The survey results won&#8217;t be available until sometime early next year.

The Germans might not want the buildings, which need major improvements. The heating in some units failed last winter. Tap water in some of the homes contained rust.

Earlier this year, a note on the front door of at least one apartment complex warned against drinking the water because it contained traces of lead, Ritchie said.

While the Air Force is tearing down hundreds of apartments at nearby Ramstein Air Base and building new town homes, there are no such plans at Sembach.

Due to a change in policy by the military to put more people off base, Sembach&#8217;s housing units are considered a surplus regardless of their condition, Largent said.

&#8220;Despite recent talk of changes at Sembach, Sembach will remain an operational base for U.S. Air Forces in Europe,&#8221; reads a USAFE statement. &#8220;It&#8217;s too early to state whether Sembach, or any of our installations, will be realigned or closed at some date in the future.&#8221;

The base dates to 1919 when French troops occupied the area. The U.S. military didn&#8217;t arrive until 1953. It served as a Cold War base until the fall of the Berlin Wall. In the early 1990s, the last planes left the base.

The airfield is now an industrial park. Since the planes departed, the base has become an annex of Ramstein Air Base. Sembach still has a small commissary, fitness center and bowling alley and a post exchange shoppette. But some of the base services have been dwindling.

Only a small number of Air Force units call Sembach home, while a portion of the base is used as lodging for people passing in and out of the area.

When the housing area was full, about 1,800 Americans lived in the 506 two-, three- and four-bedroom apartments.

Now 19 families live in the housing area and the number gets lower every month as families are moved &#8212; at the military expense &#8212; to homes either on other bases or off base.

Some families who want to stay are allowed to until they are scheduled to transfer to another base. All of the families must be out by September 2009.

Ritchie, who is assigned to the 435th Material Maintenance Squadron at Sembach, said he liked living in the housing but doesn&#8217;t mind moving with his wife and their three daughters.