Buy Photo
A woman sits on a bench across from the iconic Atomic Bomb Dome in Hiroshima, Japan, Friday, Aug. 7, 2020. (Akifumi Ishikawa/Stars and Stripes)

Buy Photo
A woman sits on a bench across from the iconic Atomic Bomb Dome in Hiroshima, Japan, Friday, Aug. 7, 2020. (Akifumi Ishikawa/Stars and Stripes) 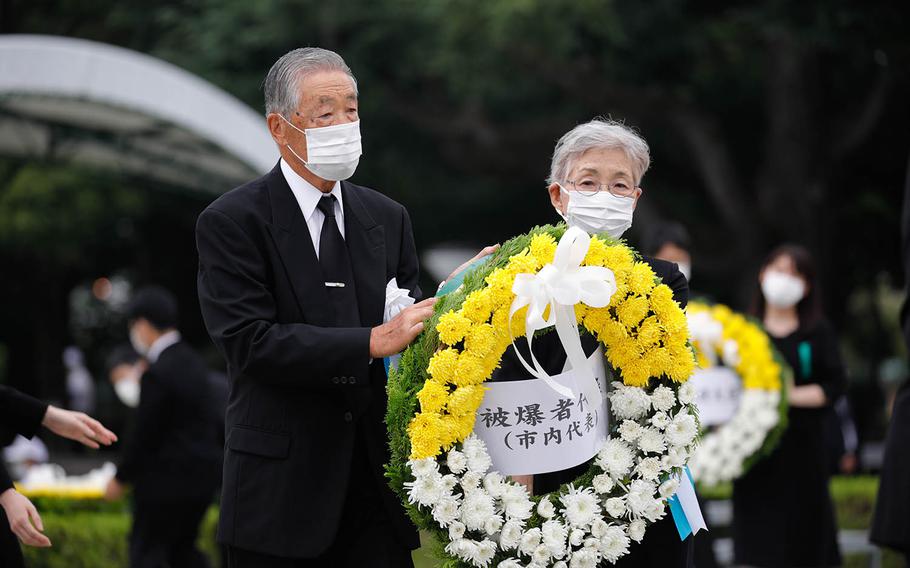 People lay a wreath at the cenotaph for the victims of the 1945 atomic bombing at Peace Memorial Park in Hiroshima, Japan, Aug. 6, 2020. (City of Hiroshima)

HIROSHIMA, Japan — Keiko Ogura was just 8 years old when the atomic blast over Hiroshima picked her up and slammed her unconscious to the ground.

She awoke, shocked, in a dim light surrounded by roof tiles and shingles. In the distance, she could see a shed burning.

“It was dark and so silent. I didn’t know what to do,” Ogura, now 82, said through an interpreter ahead of the blast’s 75th anniversary on Thursday. “I was just silent, crouching on the ground. From afar, I heard someone crying. I realized it was my younger brother’s voice. I followed that voice, and I went back home.”

Ogura, speaking to reporters at an online conference on July 27, is one of the dwindling number of atomic bomb survivors, called “hibakusha” in Japanese, still telling their stories and calling for a world devoid of nuclear weapons.

This year, the coronavirus pandemic and measures adopted to curb its spread meant scaled-down ceremonies marking the 75th anniversaries of the first and second wartime atomic blasts at Hiroshima and Nagasaki, respectively. Aging survivors of the attacks, who usually make themselves available to visitors at the ceremonies and tell their stories firsthand, were absent or kept apart from potential sources of infection.

At a commemoration Sunday of the Nagasaki bombing, Mayor Tomihisa Taue called on the government of Japan to ratify a United Nations treaty banning nuclear weapons, according to The Japan Times. Hiroshima Mayor Kazumi Matsui relayed a similar message during a ceremony days earlier.

The United States on Aug. 9, 1945, dropped a plutonium bomb codenamed Fat Man on Nagasaki, a weapon more powerful than the bomb dropped three days earlier on Hiroshima. The bomb detonated at 11:02 a.m. at 1,650 feet above the city. The resulting blast killed as many as 40,000 people and injured another 60,000, although precise casualty figures are hard to estimate, according to the U.S. Department of Energy.

Each year, thousands more survivors of the two attacks die in their old age. About 9,200 survivors were lost in the past year, according to The Japan Times report on Sunday. This year at Hiroshima, 4,934 names were added to a registry at a ceremony Thursday honoring those who died since the previous anniversary.

That list of names kept in a cenotaph at Hiroshima’s Peace Memorial Park includes all those who perished immediately or succumbed to injuries related to the explosion years later.

Ogura said the cenotaph’s inscription — “let all the souls here rest in peace for we shall not repeat the mistake” — is not just the wish of the hibakusha.

“It should be the goal of everyone all over the world to work for peace,” she said.

On Aug. 6, 1945, her older brother was working in a potato field when he saw a plane approaching and a small black dot falling through the sky, she said.

That plane was the Enola Gay, a U.S. B-29 Superfortress. The dot was the atomic bomb, codenamed Little Boy.

Her brother returned to the family’s heavily damaged home 1½ miles from the blast hypocenter and told the family that Hiroshima was destroyed.

The city was rebuilt and the ground over which the bomb detonated was turned into the Peace Memorial Park. More than 1.5 million people visit it annually, according the Hiroshima Peace Media Center. Because of the pandemic, that number has fallen substantially this year. The ceremony itself included a fraction of the usual attendees.

“Until February, this park was full of people: tourists, students and travelers from around the world wishing for peace,” Ogura said. “We don’t see many foreigners in the Peace Memorial Park this year. Being in the midst of this pandemic, I am reminded of the fear of radiation we felt right after that bombing.”

Turning a blind eye toward the effect of the coronavirus pandemic is no different than ignoring the threat of nuclear war, she said.

“People around the world must work together, must fight this disease,” Ogura said. “It’s the same sentiment we have when we are calling for the elimination of nuclear weapons. No one can evade the effects.”

Complacency toward the potential use or proliferation of nuclear weapons will become a downhill path toward nuclear war, Ogura added.

She encouraged people to use social media sites like YouTube to learn about the history of the atomic bomb and learn the stories of those who survived the attacks on Hiroshima and Nagasaki.

“We are connected. The world is connected. With that connection, why don’t we come together and work toward world peace,” she said. “As long as I have life in me, I can keep telling this story about Hiroshima and Nagasaki.”

Ogura said that each shared story is like a seed of peace carried on a new breeze: a transparent wind, without color or smell, but one can always feel it.

“We are growing older, and I don’t know when my time will come, but after I pass away, and I meet my children in life after death, and they ask me what did you do in your lifetime? What did you do?” Ogura said.

“We want to tell those who have already died that we have accomplished this within our lifetimes,” she said. “This is something that I wish and pray for every single day. That I lived to see them eliminated from the face of the Earth, so I can tell those who died in vain as a result of that bombing.”