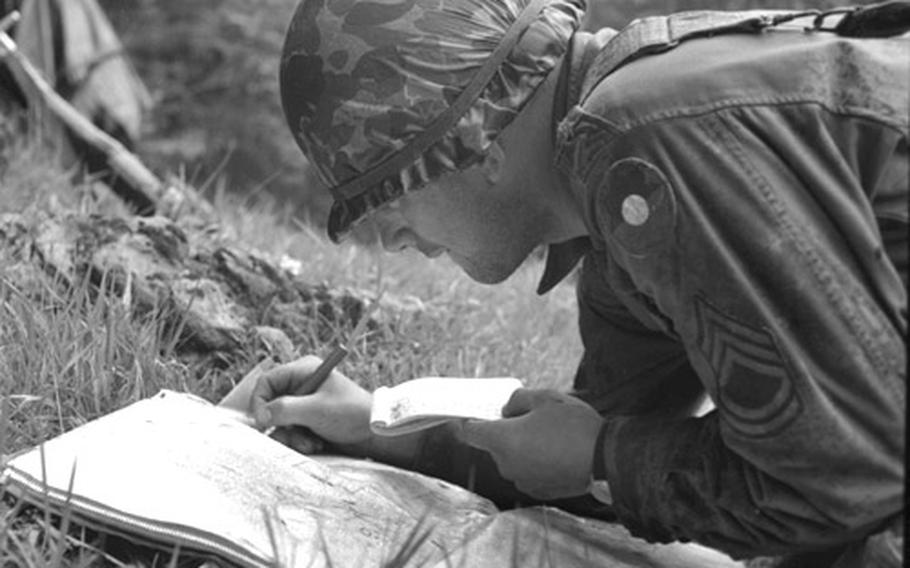 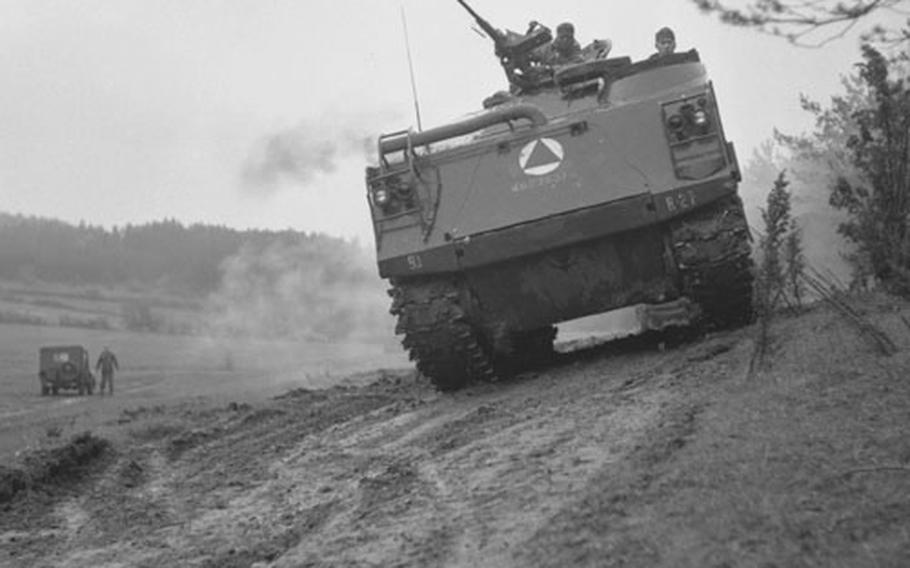 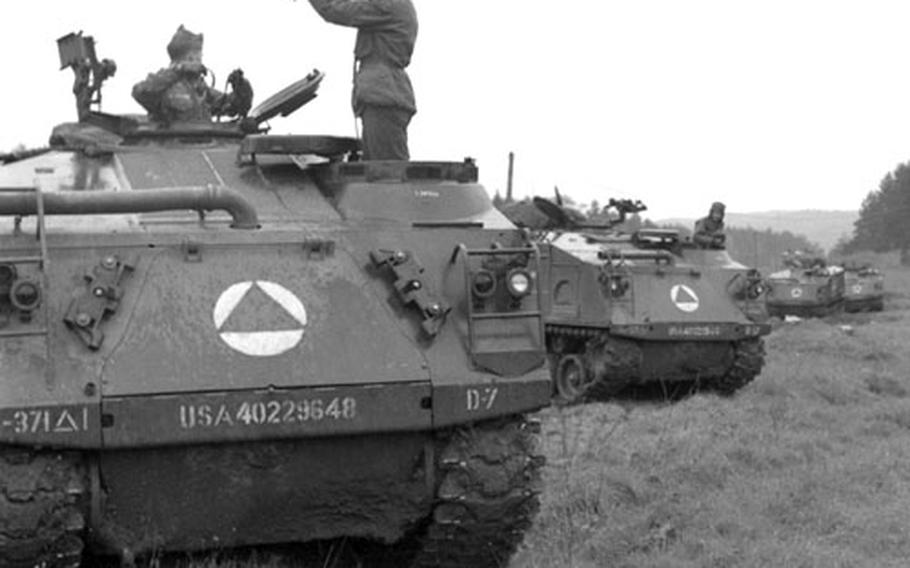 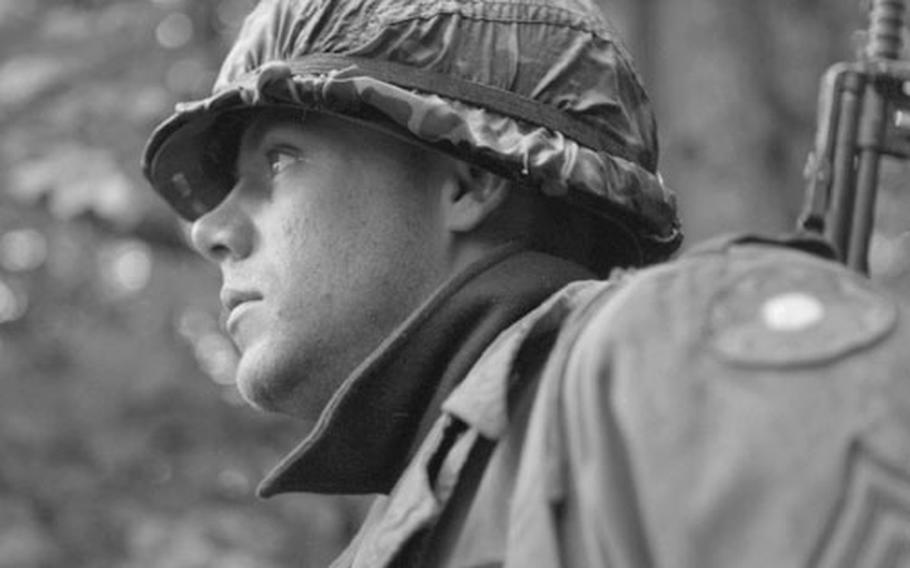 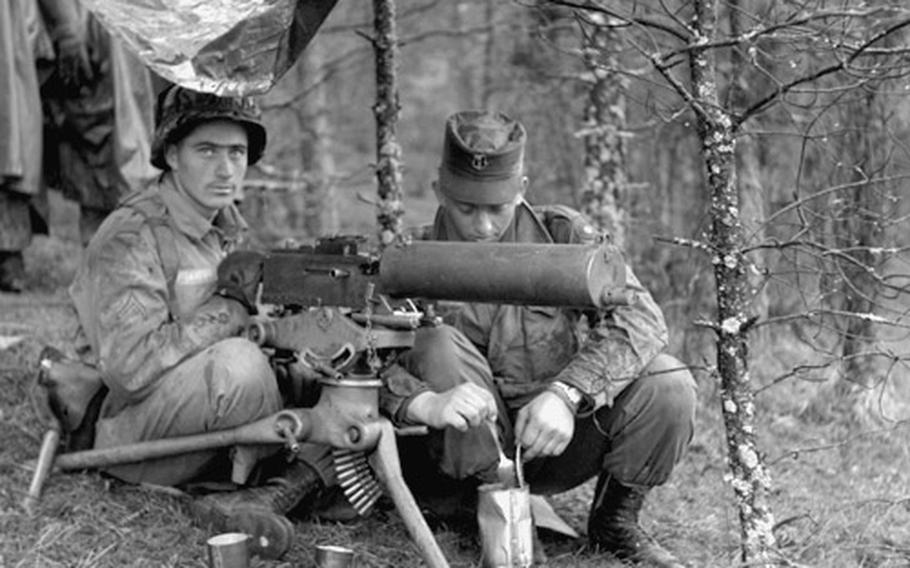 Buy Photo
Scenes from a training exercise at Hohenfels, Germany, in May, 1956. (Merle Hunter/Stars and Stripes)

IT HAD RAINED the night before. Not the mild, gentle rain which seeps into the ground and gives life to budding crops, but a heavy, torrential downpour unremitting and pitiless. Thunder boomed and lightning flashed. It was an unforgettable night, for many things happened.

All was darkness that night over the big training installation at Hohenfels, Germany. Something happened to the power during the storm. At the theatre the filming was affected. At the officer's club groups stood or sat about using cigaret lighters while someone went in search of a candle. It was pitch dark in the barracks and BOQs before light was restored.

Some miles away, in the hills bordering the vast Army installation, small groups of men huddled behind trees or makeshift tents. For three days several hundred men had been playing games out there, games of make believe that many might have played as boys. But they didn't play with tanks, bazookas, machine guns, grenades or rifles when they were kids.

It was 5 am. At 6.30 am you were to meet Capt P. L. Starkey, who had been sent by the G3 Section, 9th Div, Goeppingen, to act as observer for the division. He was to take you out in that muck and mire to see for yourself the conditions under which troops functioned during training tests. You felt sorry for yourself and yearned for the comforts of a warm office.

"I better send for a couple of ponchos and overshoes for you chaps," said the thoughtful captain. "Mud out there may be pretty deep."

Next, a skidding, bumpy jeep trip to the training area is over, and you mumble a fervent thanks as you emerge from the vehicle. Your feet sink into the mud and the overshoes are sucked off your feet by the greedy quagmire. No wonder. You forgot to buckle them. Now you have to get the mud out of the overshoes, out of your shoes and even out of your socks. The bottom of your trousers are a sorry mess. You look at the photographer with you. He was much smarter. His overshoes are buckled and already he's on his way up those hills to an area in which a tank has been carefully camouflaged.

As the rain continues to come down in proverbial buckets you finally get those overshoes back on. And now you, too, are plodding up the hill to the camouflaged tank area. Men are standing under trees looking out in the distance. Soon heads bob up out of the tank with weird faces; heads that have sprouted shrubbery and small branches from trees.

"What are these guys looking for?" you ask Starkey.

"These men are units of the defender force," Starkey explains patiently. "You see, we've been working on a problem out here. The friendly forces represent the 1st Bn, 60th Inf, 9th Div, with elements of a tank company, heavy mortar company, service company, medical company and a platoon of C Co, 15th Eng Bn, Heilbronn.

"The aggressors are the 9th Recon Co and D Co, 370th Armd Inf Bn. The recon group is from Illesheim."

Starkey is still explaining as you leave this unit to locate another group somewhere in the area. You feel cold and miserable. The road is up the hill. Road? Tanks have been through here and what was once verdant, lush grass has been gobbled up and turned into a quagmire.

At last faces peep at you from behind dense shrubbery. You have found a machine gun emplacement. Someone has made a small fire under a canvas roof and is heating a can of chow. The rain is still coming down. It has seeped through your raincoat, through the coat of your suit, through your shirt and your undershirt.

Back in the jeep you go to another emplacement. You keep looking for it through those grim, dark hills and can see nothing. You are back on a muddy road when another jeep goes by. Starkey asks them where other units can be found. It seems we have stumbled upon an aggressor unit, for they are wearing green. They don't know where remaining defender units are. They wish they did so they could mop up and end the "campaign."

Finally, after what seem many interminable miles over terrain which will linger in memory for a long time to come, we spy some movement and head toward it. It is one of the remaining remnants of the defender force. Starkey is explaining the problem again.

"The tested unit is given an order in the assembly area. From there they move out on an approached march across the reservation and attack an objective on the first day. They reorganize that first night and prepare to defend it.

"It is a three-day maneuver. The defense mission is to hold the enemy out in front and let the larger units behind have enough time to set up a defense." Starkey looks at you. "Do you get the picture?"

Sure, you have the picture. It's as clear as the mud clinging to the oversized overshoes on your feet. All you know is that it's raining cats and dogs and that the weather isn't fit for man or beast.

We leave the position to find the road somewhere at the bottom of the endless hill. We are part way down when an aggressor tank appears out of nowhere and opens fire at the group we have just left. The "surprised" machinegunners return the fire and then "grenades" are hurled at the tank. The defenders haven't a chance and are quickly rounded up. The "war," so far as they are concerned, is over.

Then you find another unit in the defense perimeter. Some of the faces look familiar. You've seen them somewhere only recently on visits to 7th Army installations. Sure, they were in snack bars gobbling up hamburgers and drinking malted milks. Quite a change from the comforts and facilities of an EES snack bar to this desolate area playing war games in ankle-deep mud.

"This the only time in the year these boys get training?" you ask Starkey as you continue on in the jeep.

Starkey smiled. "They train in winter, summer, autumn and spring," he replied.

In the distance there is the sound of renewed gunfire. You suddenly realize that in talking to those boys, huddling under trees for shelter, not one of them beefed or griped. Funny, they were even laughing a little.

You've been witnessing a game. The boys huddling in the hills for three days in all kinds of weather have been playing at war. And they play those grim games when the mercury plummets to below zero and even when it is so hot that you can fry an egg on one of the big guns. They play the game when the rain falls in torrents and they are out there training when the more fortunate back home are on the beaches in swimming trunks.

Then you feel ashamed because you grumbled over a few hours of tramping through mud. You forget the soggy overshoes which the mud had sucked off your feet and you forget the raincoat which failed to keep out the rain.

To those uncomplaining boys up in the hills those miserable three days of exercises were just a drop in the bucket compared with what they go through each year. You turn back for a last glimpse of them way up there on the hill and respect for them surges through you. They have earned their respite at snack bars. You begrudge them nothing. They have won your admiration.

This, then, is what they mean when they say a group or a division is "combat ready." They mean the boys have been through the mill and are prepared for any eventuality.

Your thoughts turn to all of the planning that went into the exercises. To Lt Col Corson Hilton, chief umpire for VII Corps, who runs the show and who will conduct a critique when the training test is over. You consider the role of Col William Kunzig, CO of the 60th Inf Regt, whose units played the part of the defenders; of Capt Rodney Rehfeld, of the 9th Recon Co, which formed a part of the aggressor group and, most. certainly, the activities of Lt Col Robert M. Schwartz, VII Corps liaison officer; Capt James M. Tobin, and 1st Lt Donald L. Wilson, operations officers.

Now we are back at headquarters in Hohenfels. Believe it or not, the rain has stopped. Starkey is saying something that sounds like "Well, what did you think of it?"

"Oh, it was quite a show," you tell the captain. "Thanks for the overshoes &mdash; that is, if I can slide them off my feet."