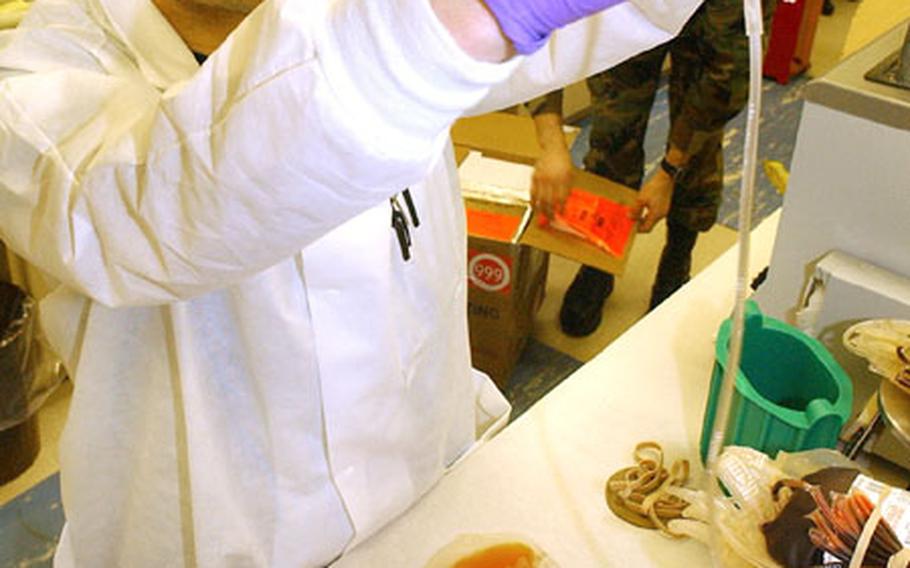 Airman 1st Class Joshua Barnett, assigned to the 48th Medical Support Squadron at RAF Lakenheath, England, squeezes a preservative solution into a bag of red blood cells in order to extend the life of the blood to 42 days. The need for blood is always greater during the summer months, but the war in Iraq is putting on a greater toll on local supplies. (Courtesy of USAF)

HEIDELBERG, Germany &#8212; The need for blood donations &#8212; greater now because of expected summer doldrums and war demands &#8212; has collectors hitting the road to find donors willing to roll up their sleeves.

June through August is always a tough time for blood donations, said Maj. Ken Pell, who heads the military&#8217;s blood collection in the European theater.

Normally, blood comes from a stable of providers within an hour&#8217;s drive of Landstuhl, Pell said. Now funded for travel, technicians are looking to bases farther away to collect blood, he said.

On Wednesday, Pell&#8217;s team heads to 7th Army Non-Commissioned Officer Academy in Grafenw&#246;hr to collect blood from students in the Army&#8217;s Primary Leadership Development Course. The all-day blood drive begins at 9 a.m. at the old gymnasium.

In 2003, 11,000 pints of blood were required in Europe, which includes supporting two military medical teams in Iraq, ongoing peacekeeping missions in the Balkans, and Navy ships in the Mediterranean Sea.

All the blood going to U.S. Central Command, about 44,000 pints in the last year, comes through U.S. European Command.

Half of Pell&#8217;s lab technicians, who belong to the Miesau, Germany-based 226th Medical Logistics Battalion, are in Iraq managing blood supplies to field hospitals.

Meanwhile, the need for blood transfusions is five times greater than last year, from 40 pints monthly to nearly 200, Pell said.

Additionally, patients often choose to have elective surgery in the summer because schools are not in session, said Pell, 43, of Clinton, Iowa, who also leads Landstuhl Regional Medical Center&#8217;s blood program.

In Europe, anywhere from 1,500 to 2,500 pints of blood are collected annually from local donors &#8212; about 30 percent of the theater requirements, Pell said. The rest is shipped from military donors in the States.

Each week, 80 to 150 pints arrive in Germany from McGuire Air Force Base, N.J. The rest is supplemented by local collections.

However, some missions have limited who can give blood.

Soldiers returning from the war must wait 12 months to give blood. Half of the members in PLDC are ineligible because they recently returned from downrange, Pell said. He hopes community members will roll up their sleeves.

Fear of mad cow disease also pushes many candidates off the donor list.

Troops stationed in Europe for six months or more from 1980 to 1996 cannot donate blood. Anyone stationed in the United Kingdom for more than three months during those years are also deferred.

Anyone who spent more than five years in Europe after Jan. 1, 1997, is ineligible to donate. Even Pell cannot donate to his own program, he said, because he was in Europe for a few years during the mid-1990s.

Once a licensed test for mad cow disease is available, those people may be allowed to give blood, Pell said.

Now, the best the military can hope for is to have commanders support blood collection efforts, Pell said.