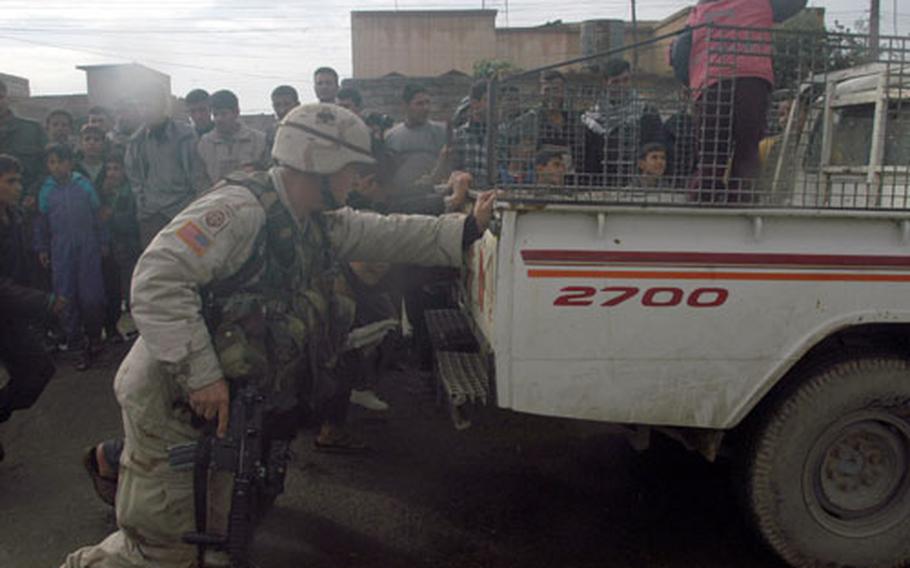 Sgt. 1st Class Bill Neumann pushes a stalled truck from a gas station in Hammam al Alil in northern Iraq. Neumann, 36, is a D Company platoon sergeant from Havertown, Pa., with the 2nd Battalion, 327th Infantry Regiment, 1st Brigade, 101st Airborne Division. The town mayor called soldiers from the "No Slack" battalion to the station because about 150 cars were lined up outside, their owners angry because the station refused to sell benzene. (Kendra Helmer / S&S)

Sgt. 1st Class Bill Neumann pushes a stalled truck from a gas station in Hammam al Alil in northern Iraq. Neumann, 36, is a D Company platoon sergeant from Havertown, Pa., with the 2nd Battalion, 327th Infantry Regiment, 1st Brigade, 101st Airborne Division. The town mayor called soldiers from the "No Slack" battalion to the station because about 150 cars were lined up outside, their owners angry because the station refused to sell benzene. (Kendra Helmer / S&S) 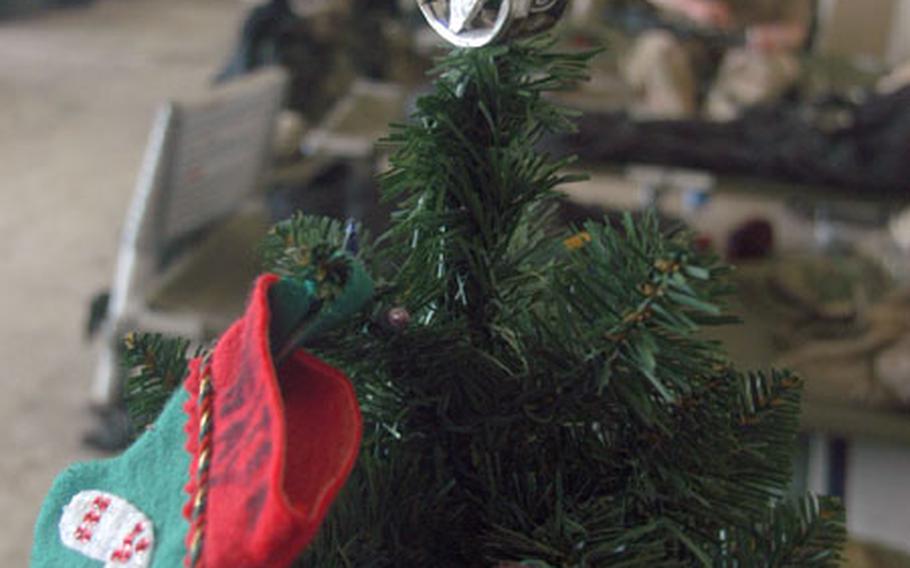 A Christmas tree decorated with a Copenhagen tobacco can (star cut into can) adds some cheer to a sleeping area occupied by a platoon with C Company, 2nd Battalion, 327th Infantry Regiment, 1st Brigade, 101st Airborne Division. The "No Slack" battalion soldiers patrol the area around Objective Aggies, a looted agriculture college in Hammam al Alil in northern Iraq. (Kendra Helmer / S&S) 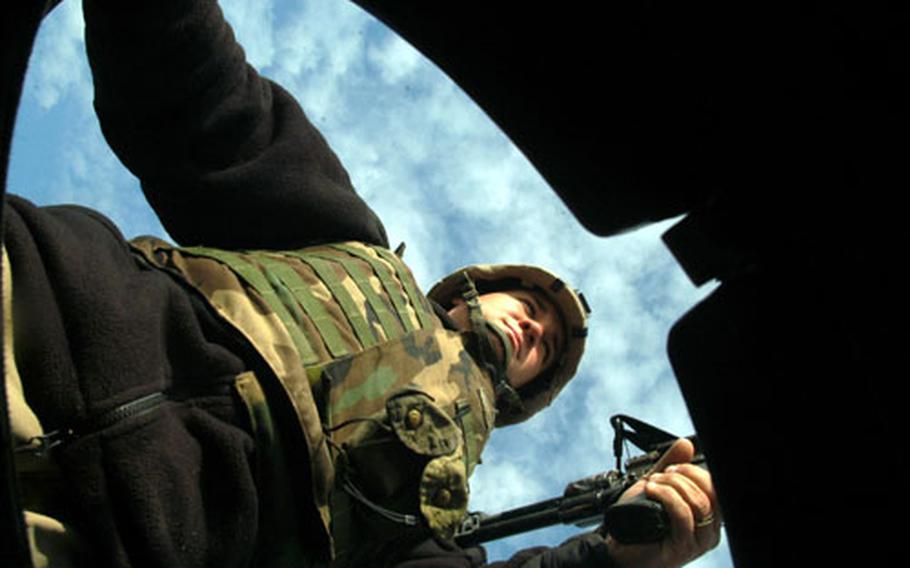 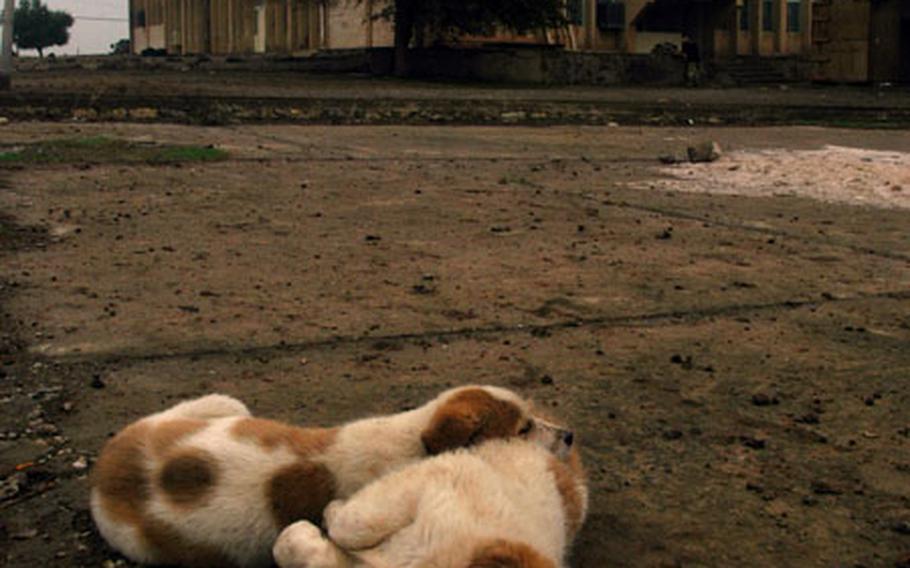 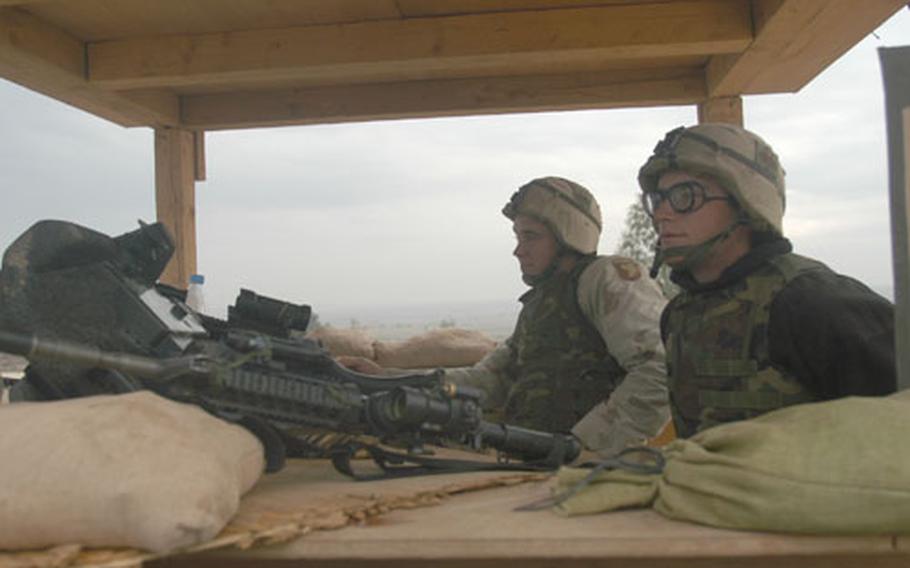 The tribal Iraqi city has a violent Hatfield-McCoy-type history.

Soldiers even refer to one legendary incident in May as the &#8220;gunfight at the OK Corral.&#8221; Feuding townspeople lined up on each side of a street in the northern Iraq town.

Since then, the tribal conflicts have subsided, but the criminal activity shifted to another target: U.S. forces.

&#8220;There&#8217;s less criminal activity and better security, but the violence has changed to being against U.S. forces and [their] supporters,&#8221; said Capt. Matt Konz, commanding officer for Company C, 2nd Battalion, 327th Infantry Regiment of the 101st Airborne Division. The battalion rotates companies from Qayyarah West Airfield to Objective Aggies, its compound in Hammam, about 12 miles south of Mosul.

A couple of times a week, Aggies falls under attack, but the mortars and rocket-propelled grenades usually fall short. The RPGs and bombs also target convoys.

No soldiers have been killed, though one troop was injured by a roadside bomb.

Aggies troops are responsible for a 15-square-mile area, home to 11,000 Iraqis. Their workload fits the battalion nickname, &#8220;No Slack,&#8221; earned during the Vietnam War. Company C originally had 125 to do the job, but about 20 have since left.

They man rooftop observation points, conduct house searches, patrol the base and &#8212; the most dreaded task &#8212; burn waste from the toilets.

The scouts have spent many nights in the surrounding barren area on reconnaissance missions.

A five-person mortar unit stands ready at night in an old pump house in case of an attack.

As temperatures drop to the 30s, the soldiers pass the time telling jokes, singing and talking about home.

Soldiers are also working with Iraqi police to stabilize the area, which used to have no government or police. The military established a police force and gathered local leaders to select a mayor.

Part of the problem is police are hesitant to step forward for fear of causing a tribal feud, Konz said.

His point was illustrated on a recent day when a call came in that 1,000 locals were on the verge of rioting at Hammam&#8217;s gas station. Konz said the report mostly likely was an exaggeration and he wasn&#8217;t sending his soldiers out. The Iraqi police would have to take care of it.

About 30 minutes later, Hammam&#8217;s mayor sent a note to Aggies for help. So soldiers drove to the station, where about 150 cars (not 1,000) were lined up. The manager closed the pumps because locals, fearing a benzene shortage, were cutting in line.

The soldiers put up concertina wire and organized the vehicles into lanes.

Soldiers directed traffic and controlled the crowd while the Iraqi police smoked cigarettes and watched.

A trip beyond Aggies&#8217; gates, even a frustrating one, can be a welcome change of scenery.

The two buildings the soldiers use aren&#8217;t very stimulating; one has rooms to sleep and work in, and the other has a small caf&#233;, Internet caf&#233; and pool table.

But the men are quick to point out that their digs are snazzy compared to months ago.

Looters had scorched the buildings and ripped out everything from wires to seat padding. Glass and ceiling tiles littered the floors. They slept on the concrete floors until cots arrived in midsummer.

They sleep with warm blankets, because the wiring won&#8217;t allow for space heaters. One hot meal a day is delivered from the airfield.

The troops say they are thankful they have electricity, although it goes out at least twice a day for a few hours. When there&#8217;s no power, there&#8217;s no water, and some haven&#8217;t showered for a couple of weeks.

Adding some cheer is a Christmas tree with a tobacco can cut into a star for the top. Its lights &#8212; and any other lights visible from outside &#8212; aren&#8217;t turned on at night because it would make an easier target for attackers. The television room&#8217;s windows are covered with light-blocking blankets.

The men carry flashlights with colored lenses to see after sunset. Any time they step outside, they must wear body armor and helmets.

The 101st Airborne Division, based in Fort Campbell, Ky., has been deployed to Iraq longer than any other unit. The soldiers originally had 179-day orders.

Staff Sgt. Kenneth Hill, a squad leader, gets a kick out of some of the crazy things he&#8217;s seen.

Once at a traffic checkpoint, he put his face up to a Volkswagen car&#8217;s steamed-up back window. Staring back at him was a ram, a sheep and two baby sheep.

Even Spc. Nathaniel Rock still manages to smile despite what&#8217;s happened the past eight months: His wife is divorcing him, his parents got divorced, and a scorpion stung him.