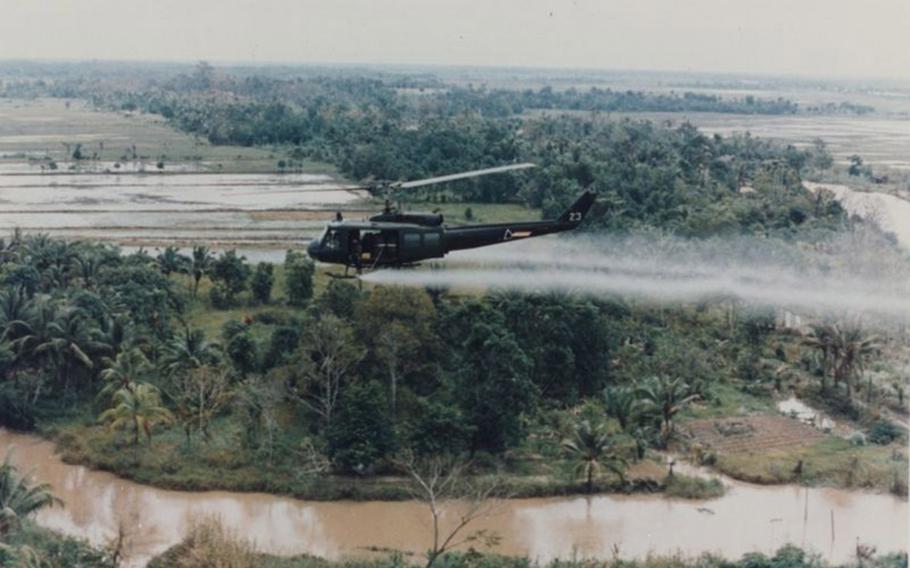 A U.S. military helicopter sprays Agent Orange over Vietnam in this undated photo from the war. (U.S. Army)

WASHINGTON — Senators on Monday intensified a push on Capitol Hill to cover Vietnam-era “blue water” sailors for Agent Orange exposure, just as another long-awaited decision on VA benefits for crews of repurposed C-123 cargo aircraft was expected this week.

A bill introduced by Sens. Kirsten Gillibrand, D-N.Y., and Steve Daines, R-Mont., would extend Department of Veterans Affairs health benefits to sailors who served on aircraft carriers, destroyers, cruisers and other large Navy ships in Vietnamese waters during the war, and who come down with illnesses associated with the tactical herbicide. A similar bill was introduced last month in the House.

The legislation comes as the VA prepares to decide as early as Tuesday or Wednesday whether Air Force reservists who served on the C-123 Provider aircraft — planes previously used to spray Agent Orange over vast swaths of Vietnam — will also qualify. It underscores the wide reach and debate over exposure and benefits nearly a quarter century after Congress passed a law extending coverage to nearly all the 2.7 million who served in the theater.

“Hundreds of thousands of our veterans are being denied benefits they need and deserve, because of a technicality in the law,” Gillibrand said in a released statement.

The House version of the bill is sponsored by Rep. Chris Gibson, R-N.Y., and has been referred to committee for consideration.

The VA decided in 2002 it would cover servicemembers for Agent Orange-related conditions such as cancer, acne and diabetes if they were on the ground in Vietnam, according to the senators. That included those in the “brown water” Navy who patrolled rivers and inland waterways.

To receive coverage, a sailor must show service on a ship at the time it was docked or evidence that the ship operated for long periods in near-shore waters, the crew went ashore or there were smaller ships ferrying crew members to the Vietnamese coast, according to a 2011 VA-commissioned study by the Institute of Medicine.

Crews aboard ships moored in deep-water harbors such as Da Nang typically do not qualify under VA rules, the institute reported.

The rule has been challenged by Navy veterans, including the Blue Water Navy Association, who sued the VA in 2006 to force a reconsideration.

The department ordered up a study by an IOM special committee to determine what dangers of exposure the sailors faced. It found a possibility that the potable water systems in warships could have sucked up seawater polluted by land runoff and concentrated the dioxins in Agent Orange through the distillation process.

But the 2011 report to the VA was mostly inconclusive and found ground troops and the brown-water sailors had a greater likelihood of exposure.

“The committee was unable to state with certainty that blue water Navy personnel were or were not exposed to Agent Orange and its associated TCDD,” the panel found. TCDD is a disease-causing contaminant.

Meanwhile, another challenge to the VA benefits rules has come from the crews of Air Force cargo planes that were brought back from the Vietnam War after spraying herbicides for Operation Ranch Hand and put back into service. About 1,500 to 2,100 reservists trained and worked on the aircraft from 1972 to 1982.

Crews have claimed herbicide and dioxin residue, which can be inhaled or ingested, remained in the aircraft and is responsible for their illnesses and diseases.

In January, the Institute of Medicine released a report finding that airmen could have been exposed to levels of herbicide and dioxin that exceeded health guidelines and caused “non-trivial” increases in the risk of illness.

Allison Hickey, the VA undersecretary for benefits, told Stars and Stripes last week that the department would delay a decision on extending the benefits until Tuesday or Wednesday.