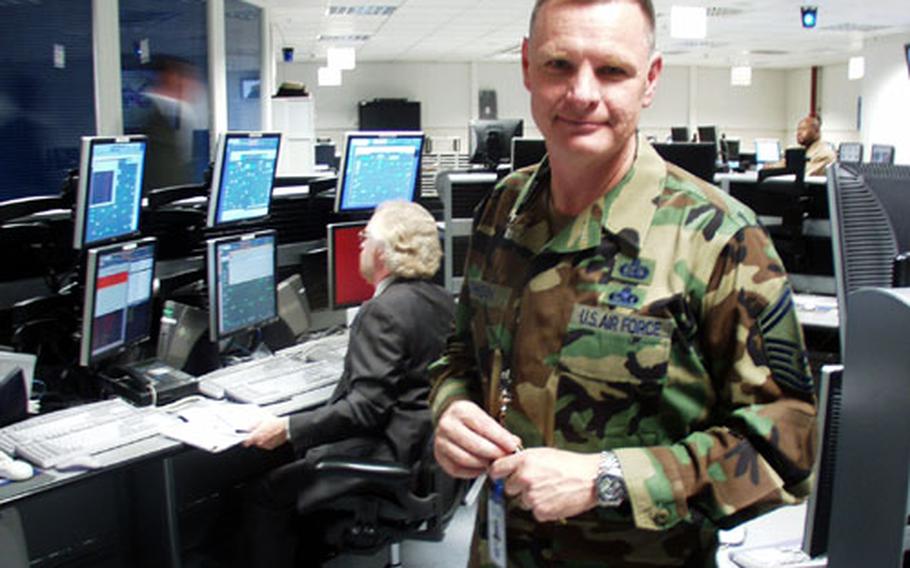 STUTTGART, Germany &#8212; Even when he is awakened in the middle of the night, Senior Master Sgt. Alan S. Johnson said he has the best job in the world.

The center is where around-the-clock civilians and servicemembers monitor and troubleshoot military communication lines in Europe, Africa and southwest Asia. It took two weeks for the staff to swap out more than 150 old computers and 200 old monitors for new ones, while keeping the place running at the same time.

All classified and unclassified phone and computer lines run through the center, which is part of the Defense Information Systems Agency, located at Patch Barracks. The center also monitors the pictures sent by unmanned spy aircraft in Iraq and Afghanistan.

Even with its high-tech heritage, the control center used to be nicknamed &#8220;the dungeon&#8221; because of its brown carpeting and the dim lighting needed to reduce glare on the old-style monitors.

As many as 35 analysts per shift used to have to jump back and forth between computers to do their jobs. They rolled across the dungeon floor from one monitor to another and almost needed a traffic-cop to direct things.

Now each employee has a bank of flat-screen, easy-to-read monitors front and center.

&#8220;We took the same amount of space and put people more appropriately in it,&#8221; said Jim Hill a DSN/DSRN (phone lines) controller. &#8220;We put people who work together next to each other.

While it took two weeks to swap equipment, the plan started taking shape a year ago when Johnson was asked to fit six more people into the room and simply couldn&#8217;t.

For the analysts, who watch every link, router and switch in the various networks, the project wasn&#8217;t just about computers. Flooring and air-conditioning were overhauled, too.

By telephone, e-mail and teleconference, the DISA mission is to &#8220;get digits in the right place at the right time,&#8221; said Army Col. Mike Flynn, the DISA commander.

&#8220;This project involved human engineering as well as technical engineering. People ought to have a good time and enjoy their job. This is a better way to do that.&#8221;