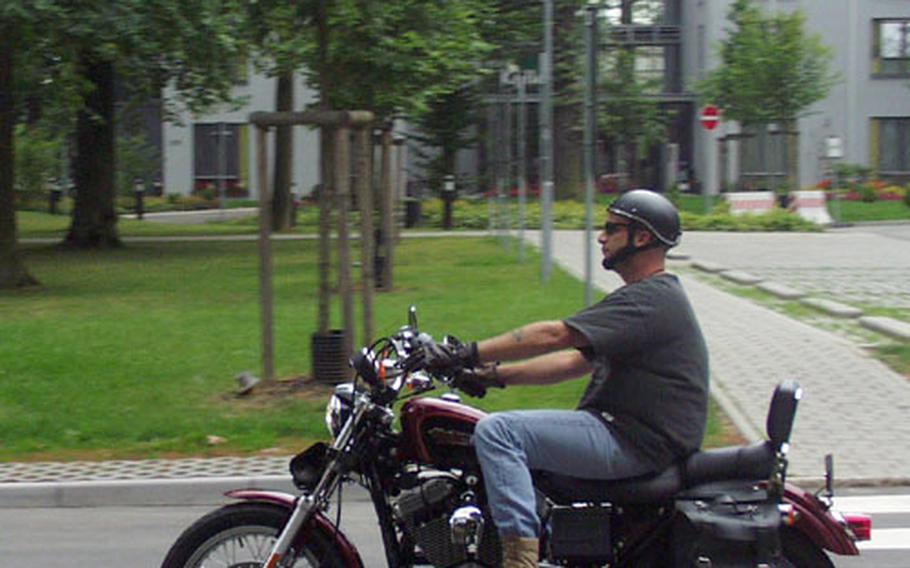 A motorcycle rider on Kelley Barracks in Stuttgart on Wednesday wears improper motorcycle gear. Military regulations require either a long-sleeve shirt or jacket and a helmet that meets American National Standards Institute standard Z90-1 or the Economic Commission for Europe Norm. "Novelty helmets" do not meet that standard. (David Josar / S&S)

STUTTGART, Germany &#8212; The Installation Management Agency will begin an intensive motorcycle training program for riders this fall that mimics safety courses in the United States.

The change follows three fatal motorcycle accidents and pleas by current riders to improve the process they took so their U.S. Army Europe license allows them to ride in Europe.

This is the first time in 15 years the requirements to ride a motorcycle have been updated.

Until now, hopeful riders took a four-hour classroom course followed by a written and practical exam.

&#8220;This is something that&#8217;s been needed for sometime,&#8221; said Joseph Perfetto, a motorcycle instructor for the military in Naples, Italy. The Navy, which sets motorcycle-riding standards for military members and civilians in Italy, has required the increased training since last year.

Perfetto said the U.S. military in Germany has had an outdated training program that should be brought up to speed.

The program will begin this fall, said agency spokeswoman Millie Waters, with at least each Area Support Group offering one class. ASGs have the discretion to hold more classes and at different locations, Waters said.

The U.S. Army trained 10 people to be safety instructors in June, and more will be trained over the summer.

&#8220;The [Motorcycle Safety Foundation] instructor candidates are selected from among experienced motorcyclists in the area and nominated by the ASGs to teach the course,&#8221; she said.

People who have a motorcycle endorsement on their USAREUR license do not need to take the new class, she said.

Since 1993, there have been 14 motorcycle fatalities and 39 motorcycle accidents with injuries for the Army in Europe, according to the Army Safety Center at Fort Rucker, Ala. Four of the accident victims sustained permanent injuries.

The U.S. Air Force in Europe, which recently made similar changes to its motorcycle-riding requirements, reports that during the past 10 years it has had about 20 USAFE members killed in motorcycle accidents and another 153 hospitalized with severe injuries.

The U.S. Navy in Europe could not readily supply figures.

In a 10-week period earlier this year, there were three fatal motorcycle accidents in Europe.

On May 11 near Hohenfels, Germany, Army Sgt. Anthony Vincent Lopez, 34, died when he lost control of his motorcycle. He had been riding a new motorcycle at the time of the accident.

On June 15 in Italy, Army Staff Sgt. Jay Woolsey, 24, lost control of his motorcycle and died after colliding with oncoming traffic. He had been motorcycle-riding only for seven months.

Perfetto said any rider &#8212; experienced or novice &#8212; on a new motorcycle has an increased safety risk, and new riders account for most of the accidents.

Under the current system, if military personnel want to ride motorcycles in Europe they must already have stateside endorsements to ride motorcycles or take a host-nation course. They then take a four-hour class and must pass written and practical exams.

Under the new program, instead of the four-hour class, they must take the Motorcycle Safety Foundation, or MSF, class. That class usually takes place over several days, although Installation Management Agency, or IMA, officials did not know how long the course would be when it begins later this year.

The Navy was already requiring riders to receive the Motorcycle Safety Foundation course.

And while Perfetto, who has been riding for more than 30 years, was excited about the new MSF class requirement, he remains concerned that too many riders fail to wear safety gear, such as legal helmets and protective jackets, pants, gloves and boots.

IMA officials do not see improper helmet use as a problem, Waters said.

There is no hard data, but riders can be seen regularly in military communities using illegal helmets and wearing short sleeves and even shorts, Perfetto said.

Illegal helmets are small, lightweight helmets that offer no protection and are sometimes part of a fashion statement by people who ride cruiser-style motorcycles.

The novelty helmets, which are illegal to be sold in Italy, are often adorned with stickers similar to U.S. Department of Transportation decals that indicate a helmet is street-legal.

But the problem, he said, is persuading them they must wear safety gear.

During a 30-minute period Wednesday on two Stuttgart-area military bases, several motorcyclists were spotted wearing riding garb that is banned by military regulations.

Parked outside the headquarters of the 1st Battalion of the 10th Special Forces Group on Panzer Casern, a rider had a novelty helmet draped over the handlebars of his Harley-Davidson bike, and on Kelley Barracks a motorcyclist wearing a T-shirt and another novelty helmet left the base as he drove by a military police station.

&#8220;We take the safety of our community members very seriously,&#8221; said Army Maj. John Sivils, who recently became the provost marshal for the 6th Area Support Group, which includes Stuttgart.

&#8220;Motorcycle safety, with an emphasis on the use of the proper equipment, is something we have recently incorporated into our plans during our safety initiatives. We take personal safety as seriously as we do force protection, after all, protecting the force is force protection.&#8221;