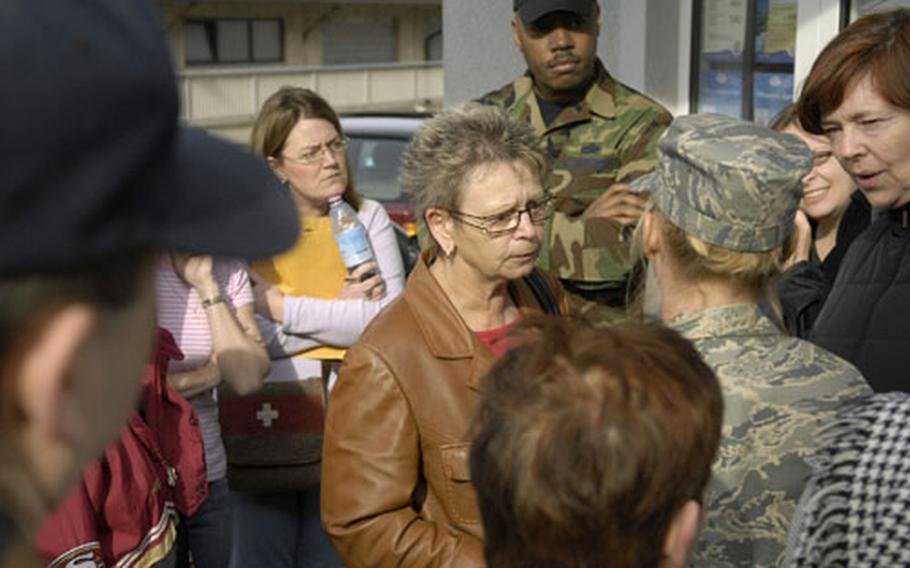 Helga Schmitt, the owner of Top TOURistik travel agency in Einsiedlerhof, attempts to communicate on Tuesday with dozens of American travel customers eager to receive cruise tickets they signed up for. The travel agency has filed for bankruptcy, but the cruise line owner said the company would honor the reservations. (Ben Bloker / S&S)

Helga Schmitt, the owner of Top TOURistik travel agency in Einsiedlerhof, attempts to communicate on Tuesday with dozens of American travel customers eager to receive cruise tickets they signed up for. The travel agency has filed for bankruptcy, but the cruise line owner said the company would honor the reservations. (Ben Bloker / S&S) 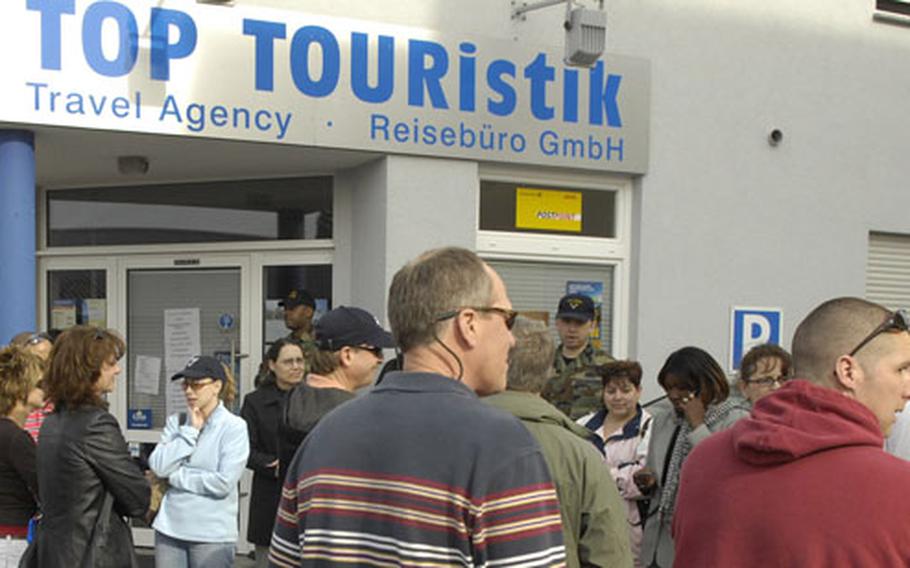 Dozens of Americans wait outside the Top TOURistik travel agency in Einsiedlerhof, Germany, on Tuesday eager to receive tickets for the cruise they signed up for. (Ben Bloker / S&S)

KAISERSLAUTERN, Germany &#8212; Dozens of Americans feared they would lose out on a cruise and thousands of dollars each because the off-post travel agency through which they booked their trip declared bankruptcy this week.

However, a bankruptcy lawyer announced Wednesday around 3 p.m. that the cruise line would honor the reservations for a Thursday departure, said Richard Clarke, the husband of a Landstuhl Regional Medical Center nurse.

The saga with Top TOURistik kicked into high gear this week when a sign was posted on the travel agency&#8217;s door saying the business was &#8220;temporarily closed.&#8221; For weeks prior, customers who had paid for their cruise asked when they could pick up their tickets but never received a straight answer.

Top TOURistik in Einsiedlerhof, which is just west of Kaiserslautern, formally filed bankruptcy Monday without providing customers their cruise tickets.

From Monday to Wednesday afternoon, Americans &#8212; including airmen, soldiers, Department of Defense Dependents Schools teachers and spouses &#8212; fretted that they would miss out on their 11-day, Costa Cruises voyage of the eastern Mediterranean Sea that leaves out of Savona, Italy, on Thursday. Twenty to 30 Americans lined up outside the locked-up travel agency Tuesday and were there Wednesday morning when Top TOURistik opened its doors.

What is unclear is the status of other customers who have booked future trips with other tour operators through Top TOURistik.

Despite the fact that her business catered to Americans and is adjacent to an Air Force facility, Helga Schmitt, owner of Top TOURistik, said Wednesday she did not speak English when approached by Stars and Stripes.

On Tuesday afternoon, with a gaggle of customers waiting outside for any information from the travel agency, emotions were tense.

When Schmitt arrived back to Top TOURistik around 5 p.m. Tuesday she was surrounded by customers who wanted information about their tickets.

One American brought a translator who spoke with Schmitt. The cruise line had the customers booked, but paperwork showed that they had not paid. Evidently, the cruise line did not receive the money Top TOURistik accepted from the customers.

On Tuesday evening, with lots of questions and few answers, things looked grim for Air Force Master Sgt. A.K. Roberts with Ramstein&#8217;s 37th Airlift Squadron. Roberts&#8217; in-laws traveled from the States specifically to take a seven-night cruise that leaves on Sunday with Roberts, his wife and their two children.

Roberts noted that Tuesday was April 1.