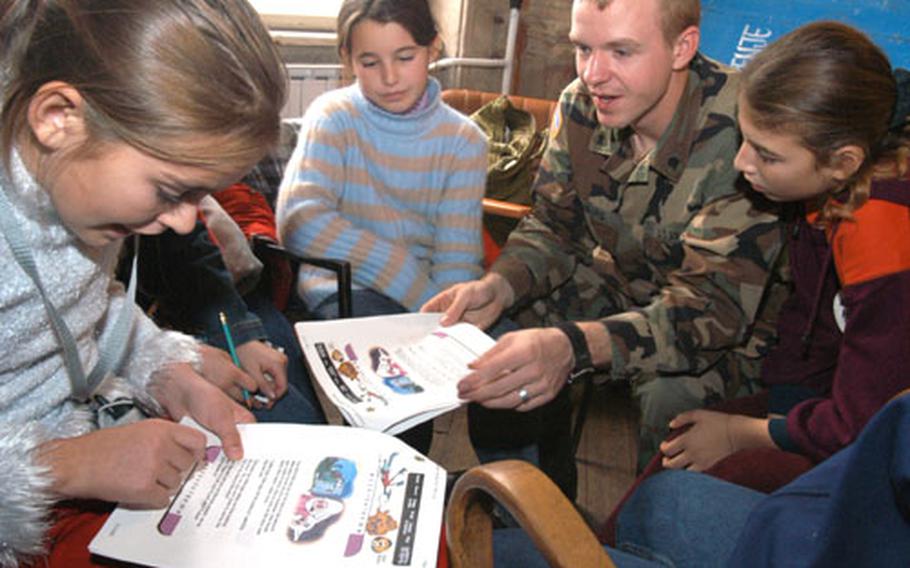 But when the tales are told in a foreign language, well, that&#8217;s a different story.

Children who gathered at the Brcko library reading room on a recent Saturday didn&#8217;t have to be bullied by a big, bad wolf to listen to &#8220;The Three Little Pigs&#8221; in English.

American soldiers took turns reading the story off the printed pages with some pictures and text. Then, they had the children go round and read parts of the story to practice their English.

The troops from nearby Camp McGovern come every Saturday for about two hours of drawing, singing, reading and speaking English with the children.

The increasing number of youngsters attending the reading sessions &#8212; more than 50 of them, up from the initial group of about 15 &#8212; speaks for their popularity.

If the group grows bigger, it will need a new room to meet in, said 1st Sgt. Dan Toivonen, of Headquarters and Headquarters Company, 2nd Battalion, 294th Armor Regiment, who attends regularly.

Soldiers are not shying away, either. A couple of first sergeants visit every time and encourage other soldiers to participate.

&#8220;It gives them [soldiers] an opportunity to have contact with children much like their own,&#8221; said Toivonen, who is from Barnum, Minn., and is a father of a fifth- and a sixth-grader.

One frequent visitor, Staff Sgt. Ross Jackson, from the same unit, got his daughter Samantha, 11, and a Bosnian girl named Milica to become pen pals.

The former elementary school teacher, who works with delinquent teenagers back in his home state of Minnesota, took time to explain some English pronunciation rules to his little group after they finished reading.

The troops try to keep the sessions interesting by doing different things, Toivonen said. They started a recent class with the children reading their homework, short essays on their families. Then the soldiers passed around Halloween art that American pupils from the soldiers&#8217; hometowns sent after they received pictures and drawings from Bosnia and Herzegovina.

Coloring pages with popular cartoon characters such as Snoopy and Tom and Jerry was a real hit. Many of the children asked for more than one page to color.

The soldiers assigned homework for the following week &#8212; the children were to write short essays on themselves.

Spc. Jake Tromburg, Company B, 2nd Battalion, 194th Armor Regiment, played guitar and sang. Then everyone joined in for a version of &#8220;If You&#8217;re Happy&#8221; in English, clapping their hands, nodding their heads and stomping their feet.