Age checks on the way at cigarette machines in Germany 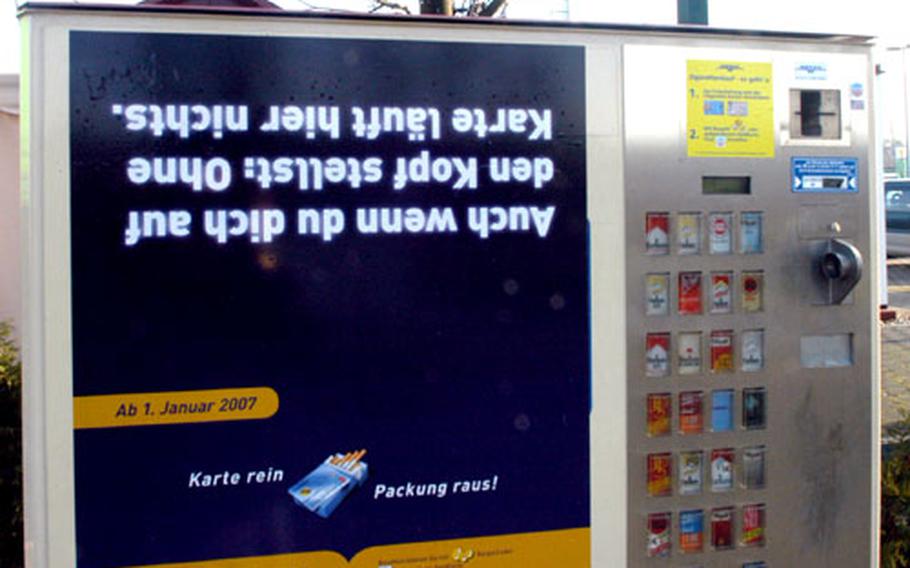 Although the worker in charge of putting up this ad pasted it upside-down, the message is clear: After Jan. 1, you can’t buy smokes here without a bank card that proves you’re 16 or older. (Geoff Ziezulewicz / S&S)

Forget about walking down to the corner and plunking 4 euros into one of those German cigarette machines for your favorite brand of smokes.

A law going into effect this year requires everyone buying cigarettes at those ubiquitous corner machines to prove their age before that fresh pack comes tumbling down the chute.

And because of the age-verification technology involved, most members of the American military community in Germany will probably be left out.

The switch affecting all of the approximately 500,000 public cigarette machines centers around the so-called “GeldKarte-Chip,” a microchip found in German credit and debit cards that is not a feature in most U.S. banking cards.

The chip gives the owner’s age when it is put into a cigarette machine, according to Christiane Kroll, a spokeswoman for fischerAppelt Kommunikation, a German marketing company spearheading publicity for the changeover.

After the card is inserted, individuals 16 or older can complete the purchase with coins or by card.

“The machine will not sell any cigarette pack for people under 16 years,” Kroll said in an e-mail.

Cigarette machines in 18-and-over locations, such as bars and clubs, will not require the card, she said.

To alleviate concerns regarding data privacy, Kroll said the age-determination feature was checked to make sure only age is being released when the card goes into the machine.

Kroll said that people should check with their local banks to see if their cards contain the chip.

The initiative to develop the system came from the vendors and associations that own the machines, and has cost 300 million euros, about $405 million, over the past few years, she said.

While Germany is still fairly smoker-friendly compared to the States and other European countries, the government and the trade associations that run the machines have been working to reduce the availability of cigarettes to minors, Kroll said.

Over the past 10 years, machines have been voluntarily removed from school and youth center areas, among other legal and voluntary initiatives, she said.

Some Americans in the Darmstadt, Germany, area said last week that they had heard about the change and did not have the proper chip in their bank cards.

But there did not seem to be great concern, as several soldiers and civilians said they purchase cigarettes only at U.S. military bases, where they are less expensive.

“I just buy over here on this side,” said Abraham Adams, a veteran who is married to a German woman. “They tax too much [in Germany].”

Adams said he can always use one of his wife’s card with the chip if necessary.

But Craig Shue, an Ohio native and civilian who travels between Italy and Germany as a portrait photographer on bases, said he doesn’t have access to the on-post American cigarettes, and depends on the machines because there aren’t many stores in the neighborhood where he lives.

“It’s trouble for me, so I’ll just try and stock up before,” Shue said. “It’s just a major inconvenience.”