After years of talks, Japan to buy island for US aircraft-carrier landing practice, report says 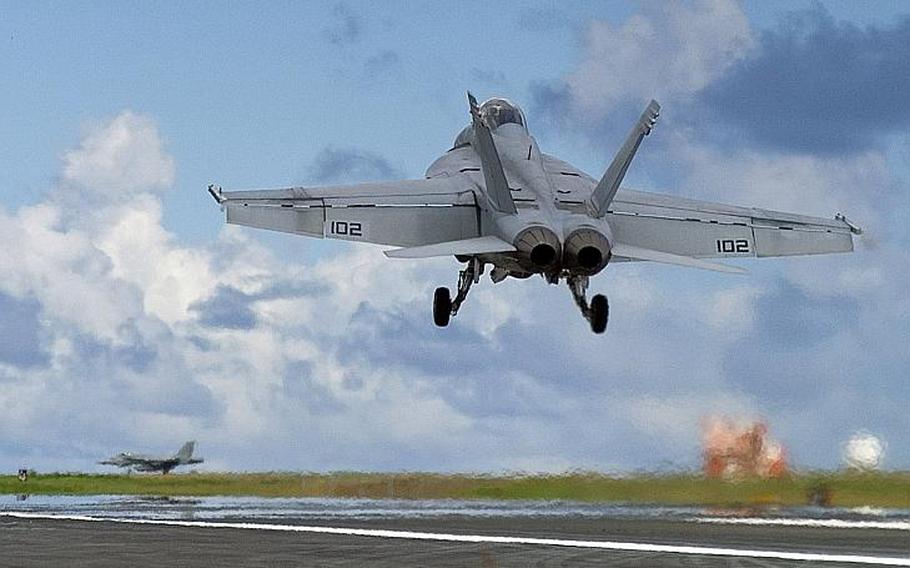 An FA-18/F Super Hornet takes part in field carrier-landing practice on the Japanese island of Iwo To, formerly known as Iwo Jima, in 2007. (Courtesy of U.S. Navy)

YOKOSUKA NAVAL BASE, Japan — The Japanese government is planning to buy an island in its Kagoshima prefecture for U.S. aircraft-carrier landing practice as soon as March, according to a Thursday report by the Jiji Press.

For decades, Navy pilots have practiced their carrier-landing skills on Japan’s Iwo Jima. The island is known as the site of a fierce World War II battle that killed more than 25,000 Japanese and American troops. A photo taken during that battle inspired the iconic Marine Corps War Memorial in Virginia.

Over the past several years, Japanese defense officials have pressed to move that practice from Iwo Jima — known in Japan as Iwo To — to Mageshima, an island closer to Marine Corps Air Station Iwakuni, where Carrier Air Wing 5 is based.

Originally, Iwo Jima was intended only as a temporary site for carrier-landing practice. In a brief interview Thursday with Stars and Stripes, a Defense Ministry spokesman emphasized the importance of finding a permanent location for landing practice.

Navy pilots practice on the island at least once a year to help them qualify for carrier landings prior to deployments. Carrier Air Wing 5 practiced there in May before the USS Ronald Reagan’s first 2018 deployment.

Since 2011, Japan’s Ministry of Defense has contemplated building a Japan Self-Defense Forces facility on Mageshima, where U.S. field-carrier landing practice could also be held. In 2014, Japan allotted $1 million for an environmental survey of Mageshima to analyze its potential.

Talk of the move has sparked anxiety over potential noise issues for some residents of nearby islands. Tanegashima, 8 miles from Mageshima, is home to about 33,000 people, according to the 2010 census by Japan’s Ministry of Internal Affairs and Communications.

In contrast, remote Iwo Jima is 760 miles south of Tokyo. Civilian access is restricted, and the island is uninhabited aside from military personnel.

“The Navy is aware of the noise concerns of the Japanese people and strives to minimize the impact of its training on local citizens while balancing our obligation to maintain operational readiness for the defense of Japan and to meet our agreements under the Treaty of Mutual Cooperation and Security,” the U.S. Navy said in a May statement on carrier-landing practice on Iwo Jima.

Most of Mageshima is owned by the defunct Taston Airport land development company. Tokyo District Court in June ordered the company’s assets be seized after creditors filed a bankruptcy claim against it, Jiji Press and Kyoto News reported on June 28. Taston had liabilities of about 24 billion yen – or about $260 million.

If the reported plans go through, Japan would pay about 16 billion yen – or about $150 million – for Mageshima, Jiji Press reported Thursday. A Japanese Defense Ministry official told the newspaper that leaders “will need to be able to offer an explanation on the purchase price during parliamentary deliberations.”

A Defense Ministry spokesman told Stars and Stripes that the department has been negotiating with Taston but declined further comment.

Defense Minister Takeshi Iwaya said he is aware of reports that the Japanese government is close to buying the island for carrier-landing practice, but also declined to give details of the negotiation during a Tuesday press conference.

“We have had repeated negotiations with the owner of Mageshima, but nothing has been decided at this point,” said Iwaya. “We will continue to work steadily on building a permanent facility as we believe a facility for FCLP, or field carrier landing practice, is something that is needed as soon as possible.”