After years of neglect, wear and tear, Camp Darby gets a facelift 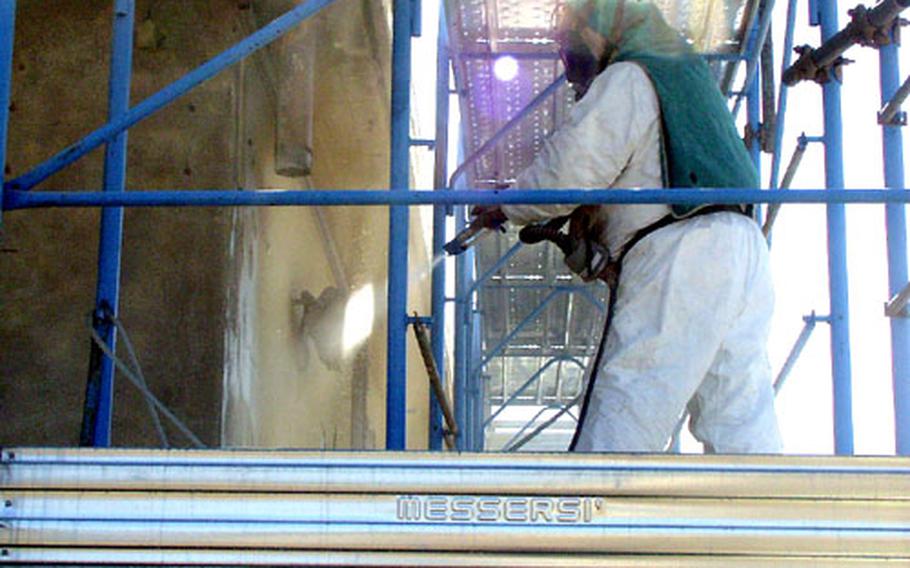 An Italian construction worker labors on the building that will house banking facilities at Camp Darby, Italy. Millions of dollars in renovations are being carried out on buildings at the base. (Kent Harris / S&S)

CAMP DARBY, Italy &#8212; One of the oldest American installations in northern Italy is slowly getting a makeover.

The amount of construction at Camp Darby, which celebrated its 50th anniversary last year, doesn&#8217;t compare with the boom at larger facilities in Aviano or Vi- cenza. But visitors who haven&#8217;t been to the base in a few years will notice some changes.

Major renovations to the American beach and campground were largely completed last year. A few weeks ago, more than half of the rooms of the Sea Pines Lodge were demolished by bulldozers. Their replacements are currently under construction and are scheduled to be completed in August.

That may cause some inconvenience for some visitors to the base, which traditionally is visited by thousands of Americans stationed in Europe every summer. But there wasn&#8217;t much choice but to renovate.

That statement could pretty much characterize much of the base, which officials say was largely neglected for years. Many of the buildings were constructed around the time the base opened in 1952. Since the mid-1990s, when the base&#8217;s population was drastically reduced to around 300 active-duty Army and Air Force personnel, not much money was spent on a variety of buildings around the facility.

Maj. Stephen Zglinicki, the commander of the base&#8217;s Area Support Team, said that changed in 2000, after several prominent visitors toured the base.

The Sea Pines is one of two lodging facilities on base and is designated primarily for visitors. The recently renovated Casa Toscana is dedicated partially for housing new arrivals assigned to Darby.

Robbins said there will still be 15 rooms available at the Sea Pines Lodge during the summer, with the other 24 opening in time for visitors toward the end of the peak season. The base also offers hundreds of campground sites and cabins.

One of the few new construction projects on the base is a kennel for dogs and cats. Currently, base personnel have to house their animals at facilities off base. Zglinicki said the kennel, which is supposed to be finished in mid-June, is primarily for those stationed on base. But he said if there&#8217;s space available, visitors on holiday could use it to house their pets as well.

A gazebo that will provide outdoor seating for the base&#8217;s only nighttime dining facility is in the design phase. Several dorms are under renovation and work is also being done on new banking facilities.

Future projects include more than $1 million in renovations to the bowling center and auto skills center. A series of large projects to upgrade maintenance facilities and storage areas at the nearby Leghorn Army Storage Depot will get under way next year.