Capt. Jan M. van Tol passes through the traditional sideboys during the recent change of command ceremony for the USS Essex held in the ship&#39;s hangar bay. Capt. van Tol relieved Captain Ronald R. Evans as skipper during the ceremony attended by about 200 sailors and guests. (Courtesy of USS Essex)

Capt. Jan M. van Tol passes through the traditional sideboys during the recent change of command ceremony for the USS Essex held in the ship&#39;s hangar bay. Capt. van Tol relieved Captain Ronald R. Evans as skipper during the ceremony attended by about 200 sailors and guests. (Courtesy of USS Essex) 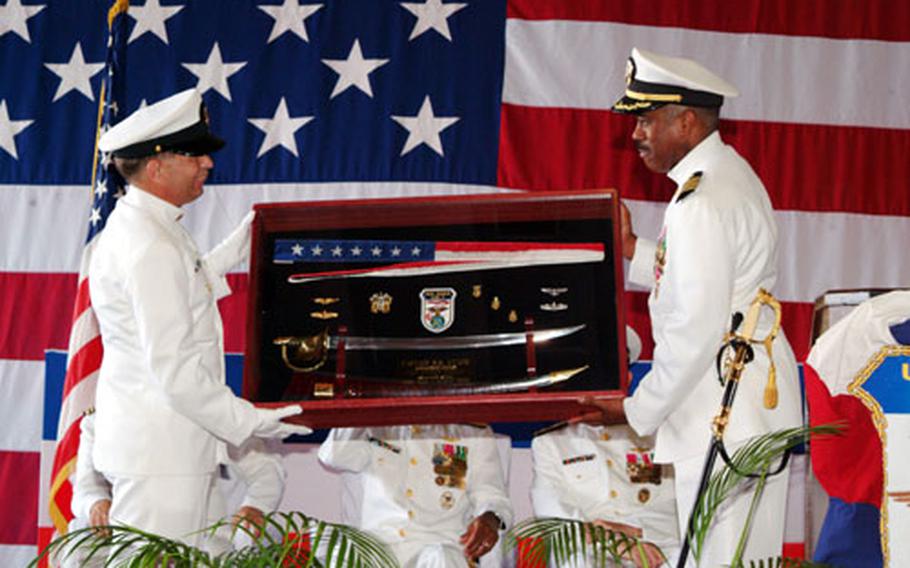 SASEBO NAVAL BASE, Japan &#8212; Following a summer of upgrades and maintenance, the USS Essex is under way in the Sea of Japan with a new skipper.

Van Tol came to the Essex from the Office of the Secretary of Defense in Washington, having served as the senior military assistant to the net assessment director.

Before taking the helm in April 2002, Evans served as the ship&#8217;s executive officer. His next assignment is assistant deputy director for information operations with the Joint Staff in Washington.

After testing, the Essex and its crew will assume a role as an Expeditionary Strike Group flagship, leading several amphibious ships, an Aegis-capable cruiser and destroyer, a frigate and a nuclear-powered attack submarine.

Along with a crew exceeding 1,000 sailors, more than 200 high-tech equipment contractors from the United States and Japanese workers from Sasebo&#8217;s Ship Repair Facility completed about 2,400 upgrades and maintenance tasks.

The biggest challenge was organizing and scheduling the jobs, said Cmdr. Bill Edge, who coordinated the effort.

Workers overhauled a major boiler and installed a multi-circuit digital patch panel for communications, according to a report issued by CTF-76.

Representatives from the Naval Air Systems Command field office at Yokosuka Naval Base inspected the Essex in August.

In an Aug. 12 CTF-76 report, the Essex was determined fit for the seas.

The Essex crew successfully qualified for ARQ at a level that puts them well ahead of their certification schedule, the report said.

The Essex&#8217;s schedule as a forward-deployed ship was a hurdle in planning maintenance and upgrades.

&#8220;Our SRAs come fast and furious. We operate right up until the week before the SRA starts,&#8221; said Lt. Cmdr. Bill Carroll, ship superintendent. &#8220;The ship is back out operating and training the week that it&#8217;s over. The time crunch comes into play a lot more here than it does in the states.&#8221;