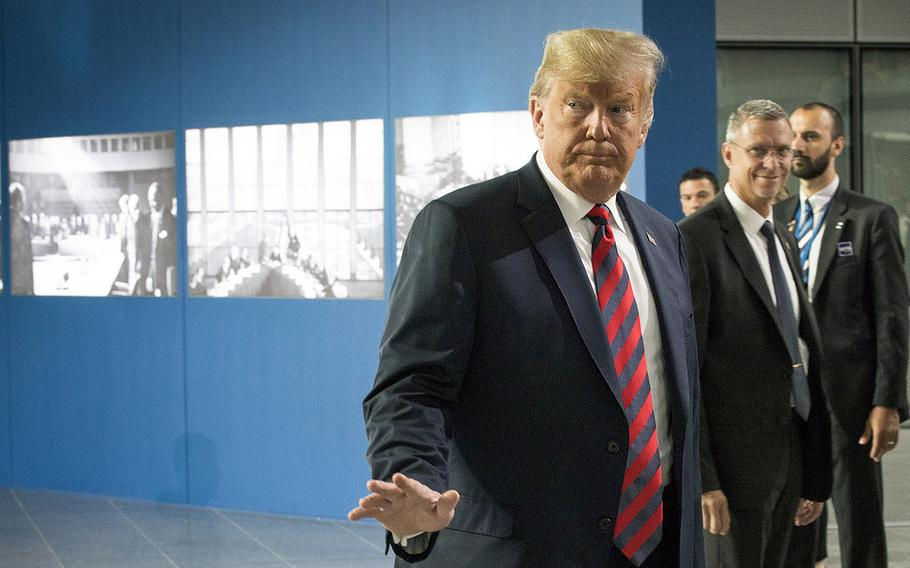 President Donald Trump arrives at NATO headquarters in Brussels for the second day of the organization's summit, July 12, 2018. (Courtesy of NATO)

BRUSSELS — President Donald Trump declared Thursday that NATO was “much stronger” than when the two-day summit of world leaders began, citing progress toward increased defense spending.

Trump set off a brief commotion at NATO headquarters Thursday when he issued new spending demands on allies, forcing the alliance to convene an emergency session.

When Trump emerged from the session, he said that he remains committed to the 70-year-old alliance despite his harsh rhetoric toward it.

“I told people I would be very unhappy if they didn’t up their commitments,” Trump said. “I think that NATO is much stronger now than it was two days ago.”

Trump said all allies have agreed to reach the current NATO benchmark of dedicating 2 percent of gross domestic product to defense and that it would happen in a “relatively short period of years.”

Trump appeared to back off of an earlier demand that the spending increases take effect “immediately.” He also said on Twitter Thursday morning that the eventual goal should be for allies to increase levels to 4 percent of GDP, but he did not issue a deadline.

Despite the political tumult, which included a lot of Trump criticism directed at Germany, NATO moved forward with several new initiatives during the summit.

Allies agreed to set up new headquarters to improve the movements of forces in a crisis and launched a new training mission in Iraq.

Still, there are lingering doubts about Trump’s commitment to NATO given the barrage of anti-alliance tweets from the president, as well as his attacks on members’ spending commitments and accusations that allies are security free-riders.

Wolfgang Ischinger, a former German ambassador to the U.S., wondered if Trump’s repeated descriptions of NATO as “ripping off” the U.S. taxpayer would eventually result in a loss of popular support for the alliance.

“What happens to your voters in your state?” Ischinger asked Republican Sen. Thom Tillis of North Carolina.

“A concern about NATO never comes up,” Tillis said at a sideline NATO event. “But we need to be clear (that) social media and headlines are not a reflection of the American public.”

Trump’s criticisms have caused critics to speculate that he ultimately wants to pull out of NATO. When asked whether he has the authority to make such a decision, Trump said he did.

“I think I probably can, but I think that is unnecessary,” Trump said.

Trump acknowledged the talks were heated in Brussels, but said that by the end “the level of spirit” was “incredible.”

“We made a tremendous amount of progress today,” Trump said. “The United States commitment to NATO is very strong, remains very strong.”

German Chancellor Angela Merkel told reporters in Brussels that “there was a clear commitment to NATO by all” at the emergency session, according to The Associated Press.

She said that Trump raised the topic of better burden-sharing and more spending by Germany, “as has been discussed for months,” and that, “we made clear that we’re on the way,” AP reported.

On Wednesday, Trump tweeted that Germany was “captive to Russia” because of a natural gas pipeline deal with Moscow.

He continued his criticism Thursday on Twitter, writing that “Germany just started paying Russia, the country they want protection from, Billions of Dollars for their Energy needs coming out of a new pipeline from Russia. Not Acceptable!”

On Monday, Trump heads to Helsinki for talks with Russian President Vladimir Putin. Trump said topics for the meeting include the conflict in Syria, along with Russian election meddling in the U.S. and Ukraine.

When asked whether he intended to recognize Russia’s seizure of the Crimean Peninsula from Ukraine in 2014 as legitimate, Trump left the door open.

Trump said Russia has invested a lot in Crimea — including a new bridge and submarine port — and that the Russian takeover happened on “(President Barack) Obama’s watch.”

“What will happen with Crimea at this point on, I can’t tell you,” Trump said.