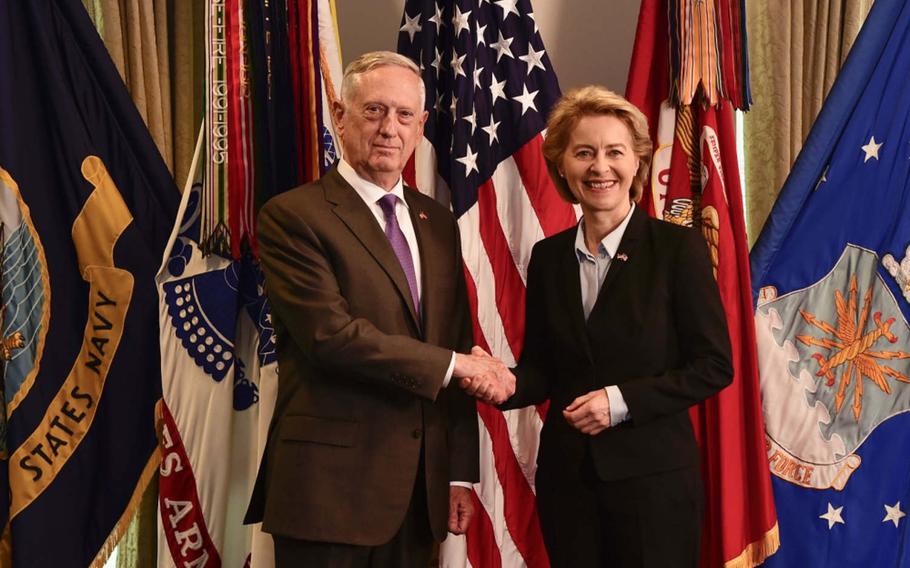 “I think they are on the right track,” Mattis said Wednesday in Washington. “We welcome the announcement that Germany wants to increase its defense spending by 80 percent by 2024.”

Mattis, during a meeting with German Defense Minister Ursula von der Leyen at the Pentagon, also highlighted Germany’s role in supporting French counterterrorism efforts in northern Africa, its leadership in NATO’s mission in northern Afghanistan and its oversight of a battlegroup in Lithuania.

Yet Mattis’ comments come on the heels of a series of rebukes from Trump, who has been as critical of Germany as any country — ally or enemy.

Trump said in a tweet on Monday that the German people were turning against their leadership because of immigration policies that have allowed “millions of people in who have so strongly and violently changed their culture.”

During a meeting of the G-7 in Canada earlier this month, Trump also blasted Germany for not meeting NATO defense spending targets.

In 2014, NATO members agreed to dedicate 2 percent of gross domestic productto their respective militaries, but Germany said it wouldn’t reach that level by the 2024 deadline. Berlin expects expenditures to be at 1.5 percent by 2025 and hasn’t set a clear timeline for reaching the NATO benchmark. Trump has been unrelenting in his criticism of NATO members not meeting their spending obligations.

Mattis has applied a softer touch in criticizing Germany and has emphasized the need for unity among allies.

“The frequent communications we share between us is simply one factor in the aspect of our enduring German-U.S. relationship, a sign of trust between two NATO allies,” Mattis said Wednesday. “Yet, for how often we communicate, the United States does not take this relationship for granted.”

But in July, the divisions between Washington and Berlin are expected to be on center stage when NATO heads of state gather for a summit in Brussels.

Trump’s disagreements with German Chancellor Angela Merkel go beyond military matters. Berlin and Washington also are at odds on trade and the White House’s decision to pull out of the Iran nuclear deal.

In Washington on Wednesday, von der Leyen made no mention of Trump and said Germany was committed to doing more on defense. But there’s “still a lot to do,” she said.vandiver.john@stripes.com Twitter: @john_vandiver