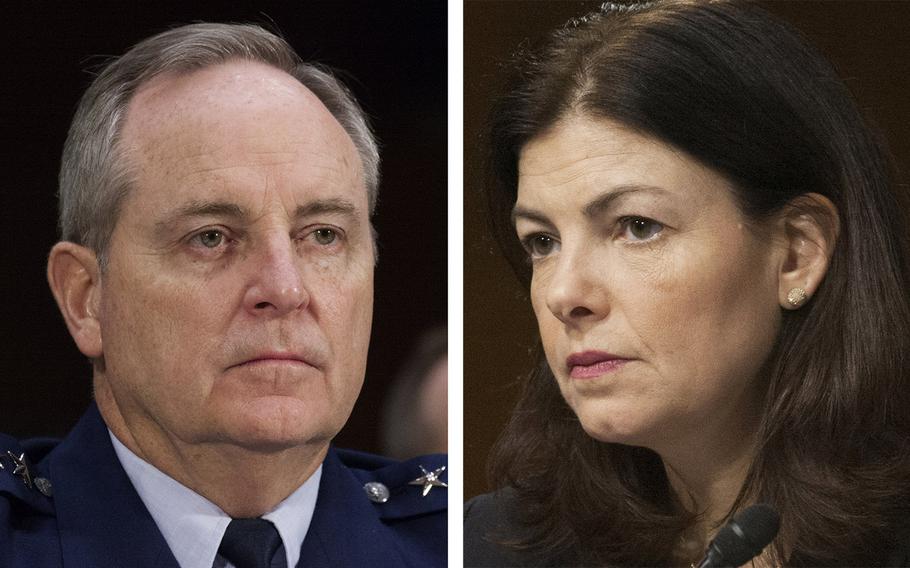 Buy Photo
“It worries me about the climate and tone that is set if airmen and airwomen are told they are committing treason by communicating with (Congress),” said Sen. Kelly Ayotte, R-N.H. (right) “I completely commit to the lawfulness of communication with Congress,” said Chief of Staff Gen. Mark A. Welsh III. “I support any airman’s right to discuss anything that you’d like to discuss with them and for them to give you their honest opinion.” (Joe Gromelski/Stars and Stripes)

WASHINGTON — Air Force Chief of Staff Gen. Mark Welsh faced tough questioning Wednesday in the Senate over whether the service is investigating airmen who have spoken to Congress about the planned retirement of the A-10 Thunderbolt aircraft.

Sen. Kelly Ayotte, R-N.H., said she was told about the internal probes after the two-star vice commander of the Air Force Air Combat Command caused a minor scandal and prompted an ongoing inspector general investigation by warning airmen that discussing the aircraft’s capabilities with lawmakers could amount to “treason.”

The service is trying to retire the close-air-support aircraft — known for its 30 mm Gatling-type cannon — to save money, but has run into resistance from troops and members of Congress who believe the so-called Warthogs are still highly valuable on the battlefield. Maj. Gen. James Post’s comments and the report of internal investigations come as the White House prepares to release the proposed defense budget and likely opens another year of wrangling between the Air Force and Congress over the aircraft’s retirement.

“What I’m hearing is there is actually an investigation going on in reverse — to find out who has communicated with Congress — and to me that seems the opposite of what we would be trying to accomplish in looking at what Gen. Post said, and whether it was lawful or not,” Ayotte said during a Senate Armed Services Committee hearing. “So, I hope there will be no punishment or any kind of pursuit of people trying to communicate with Congress.”

Welsh, who had been called to testify on budget caps, denied any involvement or knowledge of the probes.

“I know of nothing along those lines at all. I would be astonished by it,” Welsh said. “Certainly I am not part of it; the secretary is not part of it; and I would not condone it.”

Federal and military law gives all troops the right to communicate with congressional lawmakers through official and private channels, though they are not to use their service or rank to endorse partisan political causes or campaigns.

“I completely commit to the lawfulness of communication with Congress,” Welsh said. “I support any airman’s right to discuss anything that you’d like to discuss with them, and for them to give you their honest opinion.”

The general said he took some action but the IG investigation into Post’s “treason” comment is ongoing and he is waiting to make any final judgment until the facts are in.

“When I read the newspaper article, I actually contacted the general officer involved and his commander,” he said.

Post made his comments to a roomful of officers at Nellis Air Force Base in Nevada earlier this month.

“If anyone accuses me of saying this, I will deny it … anyone who is passing information to Congress about A-10 capabilities is committing treason,” Post told the airmen according to the military blog John Q. Public.

The Air Combat Command has said the statement was meant as hyperbole to underscore that airmen should not be involved in influencing finalized plans to retire the beloved aircraft.