After the turkey, it’s time to get in line for on-base sales 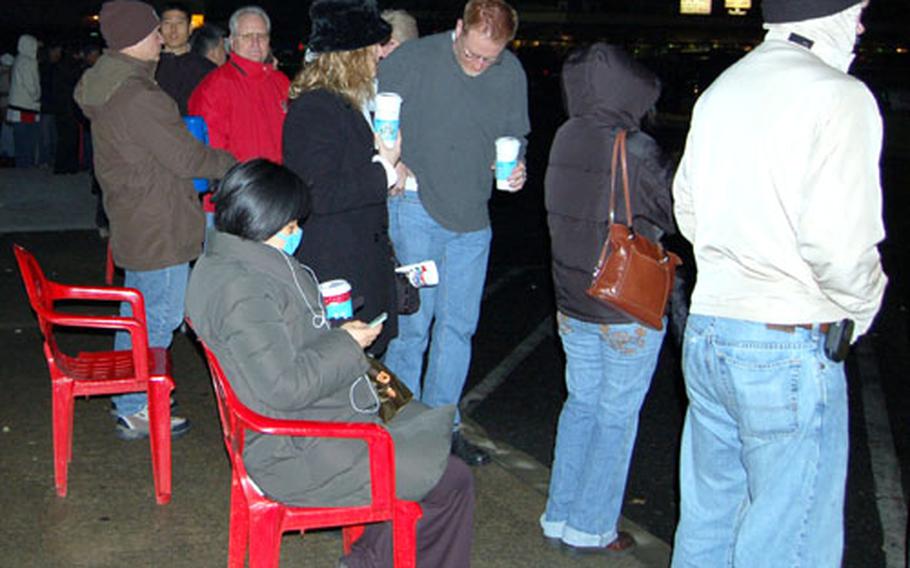 Customers stand in the cold in the early hours of Black Friday waiting for the Yongsan Garrison Post Exchange to open. (Jimmy Norris / S&S)

Customers stand in the cold in the early hours of Black Friday waiting for the Yongsan Garrison Post Exchange to open. (Jimmy Norris / S&S) 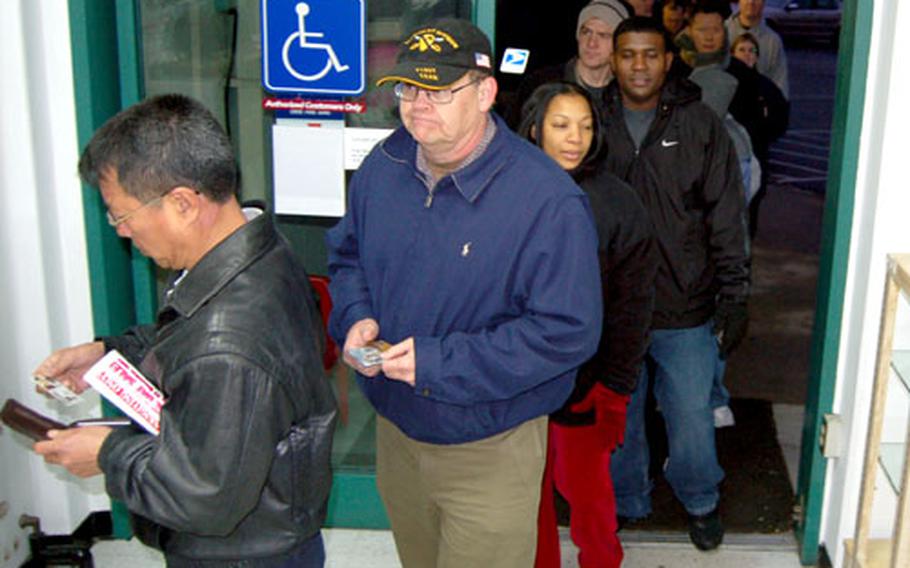 Customers file into the Yongsan Garrison Post Exchange. Many of them had been waiting in line more than four hours hoping to take advantage of the sales and giveaways available. (Jimmy Norris / S&S) 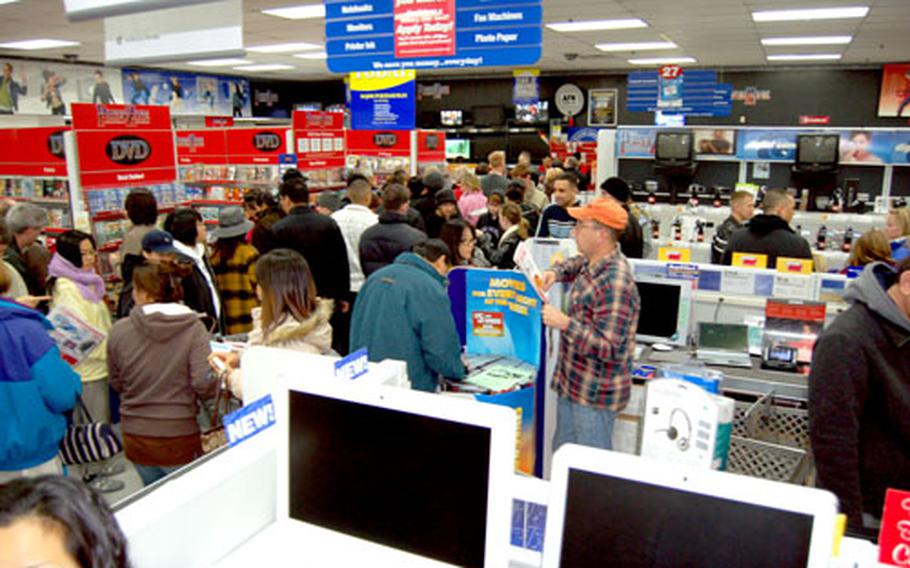 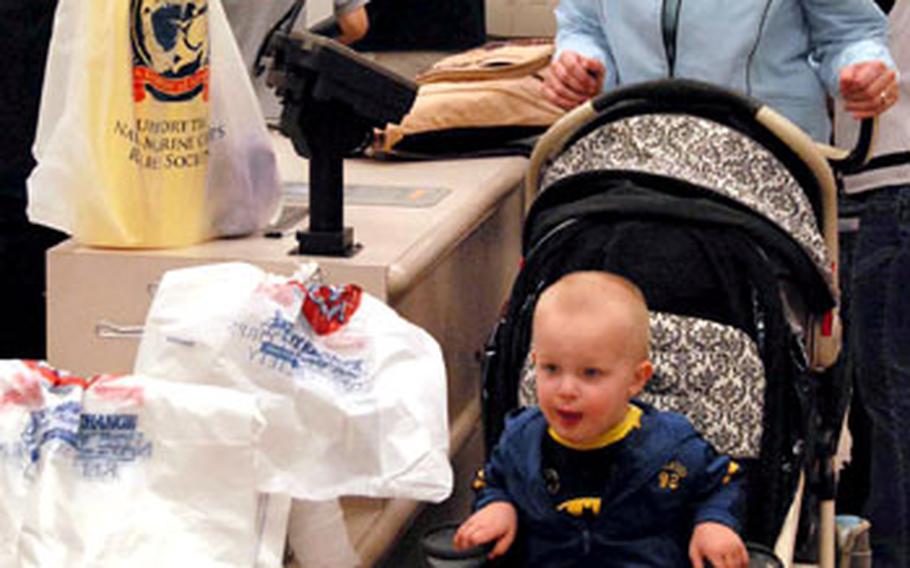 Petty Officer 1st Class Margaret Jackson checks out with items for her son at the Navy Exchange at Sasebo Naval Base. (Travis J. Tritten / S&S) 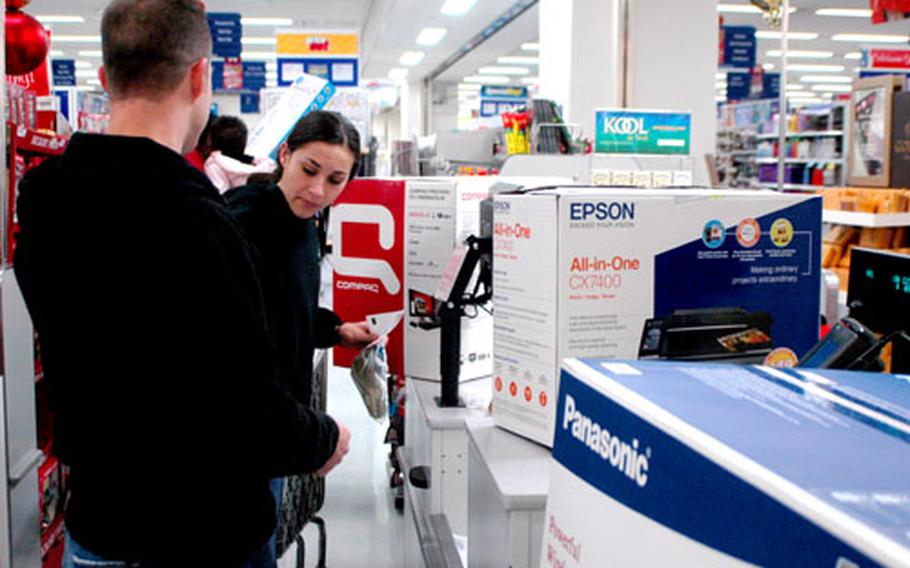 YOKOTA AIR BASE, Japan &#8212; While people lining up in formation at o&#8217;dark-thirty on a military base is not an uncommon scene, the type of formation that took place outside base exchanges Friday is an experience that happens only once a year.

The day after Thanksgiving, known by many as Black Friday, is one of the biggest shopping days of the year, when retailers across America offer up all sorts of bargains and specials to lure customers into their stores.

Pacific military exchanges were no exception, as hundreds of eager customers gathered before sunrise to try to find the best deals.

&#8220;We actually had people waiting outside at midnight,&#8221; said Larry Salgado, the Yokota exchange general manager, adding that when they finally opened the store doors at 7 a.m., hundreds of people were waiting in line.

At Yongsan Garrison, South Korea, customers started lining up outside the PX at 3:30 a.m. hoping to get a crack at $20 gift cards as well as great deals.

A veteran of several AAFES Black Friday sales, Cancino said he got in line at 3 a.m. last year but wasn&#8217;t as excited by the selection of sale items this year.

By the time the store opened at 7 a.m., the line was 400 people long and growing.

The store was out of gift cards within the first five minutes, as hordes of early risers crowded into the building&#8217;s entrance, some of them running toward the electronics department.

Some of the hottest items to fly off the shelves were electronics, including laptop computers, digital cameras, MP3 players and video game consoles.

Tech. Sgt. Tony Myers and Airman 1st Class Mercedes Swenson from Yokota&#8217;s 374th Maintenance Squadron took full advantage of the deals, buying a PlayStation 3, some iPods and other electronics to use as prizes for their unit&#8217;s holiday party.

Some people even traveled from other bases to take advantage at other exchanges.

&#8220;We come up here from Yokosuka (Naval Base) to see the AAFES side of the house,&#8221; said Chief Petty Officer Algernon Shaw, who was shopping with his family at Camp Zama&#8217;s exchange.

Meanwhile in South Korea, Staff Sgt. Robert Parker, from the Headquarters and Headquarters Company, 19th Sustainment Command, and his family were making a circuit of the large post exchanges, hitting Friday&#8217;s sales at Yongsan and Saturday&#8217;s at Osan Air Base.

Other shoppers preferred to avoid the early-morning rush and showed up later in the day.

At the Navy Exchange at Sasebo Naval Base, Navy spouse Judy Russell said she spent a couple of hours &#8212; her baby in tow &#8212; searching for bargains but was glad to miss the early-morning clamor.

Petty Officer 1st Class Margaret Jackson and her toddler waited in the check-out line behind another mother who tried unsuccessfully to console a crying child.

She also came in the late morning to miss the early crowd but said she was disappointed at the selection.

Samuel Simmons, an Air Force retiree who was shopping at the Kadena Air Base exchange on Okinawa, said he also failed to find any &#8220;deals.&#8221;