After the shooting, combat instincts kicked in 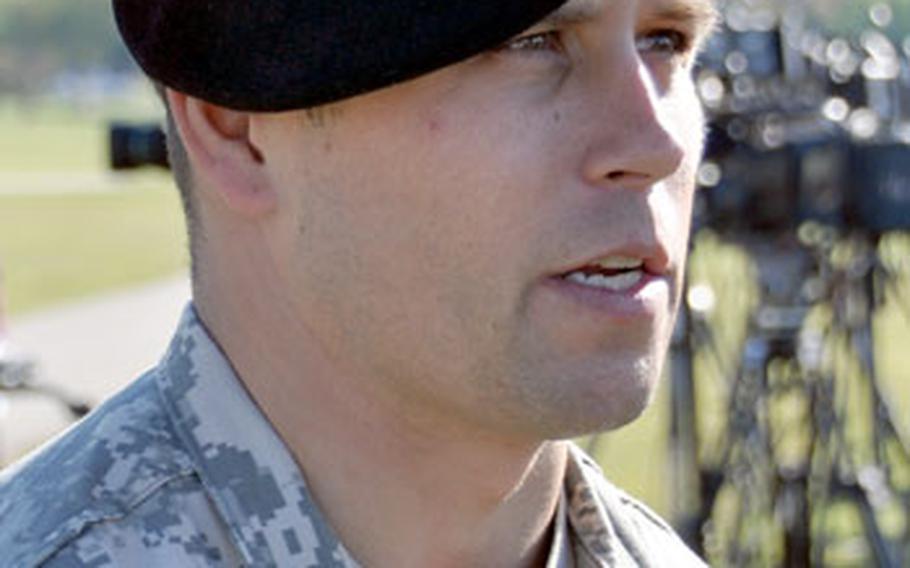 Sgt. Andrew Hagerman, a military police officer, was one of the first on the scene after the shootings. He said was chaos with people yelling and running around. (Megan McCloskey / Stripes)

FORT HOOD, Texas &#8212; It lasted just four minutes from the time someone first dialed 911. But when the shooting stopped, the scene looked like the aftermath of a fearsome battle in Iraq or Afghanistan.

The dying and the wounded were sprawled across the room. Blood was everywhere.

Survivors and first responders tore off their shirts to fashion makeshift tourniquets, just like they were trained to do on the front lines.

Sgt. Howard Appleby heard about the shootings when his psychiatrist canceled his appointment for post-traumatic stress disorder treatment. The 31-year-old combat engineer tore off his uniform top and ran down to the emergency room to help.

He and other soldiers pulled the injured out of the ambulances and private cars that were flooding the roundabout drive outside the hospital.

He helped for about 45 minutes, crying the whole time. He was having flashbacks of Iraq, where over the course of two deployments he saw three fellow soldiers killed and suffered traumatic brain injury in a bomb blast.

Military policeman Sgt. Andrew Hagerman was about a mile and half away when he got the call over the radio. Then cries of &#8220;Officer down! Officer down!&#8221; came through.

When he arrived at the scene, Sgt. Kimberly Munley, the civilian officer who took down the alleged shooter, was being loaded into the ambulance.

The wounded were mostly outside the building being treated by those there &#8212; &#8220;doing what we do in Iraq,&#8221; said Maj. Stephen Beckwith, a doctor who was just coming off his shift in the ER.

Hagerman stepped through the doors into the office lobby and found people yelling and running, he said. &#8220;There was a lot of blood.&#8221;

With the chaos, &#8220;I did spin a circle a couple of times,&#8221; he said, noting he was trying to not to contaminate the crime scene by stepping in the blood. At that point, police knew the shooter was down and they set out to make sure there were no others.

Hagerman said he deployed to Iraq twice and he had never seen something so severe.

At the hospital rumors were swirling, Capt. Reis Ritz, a doctor said.