After the flood, Yongsan library enjoys a deluge of books 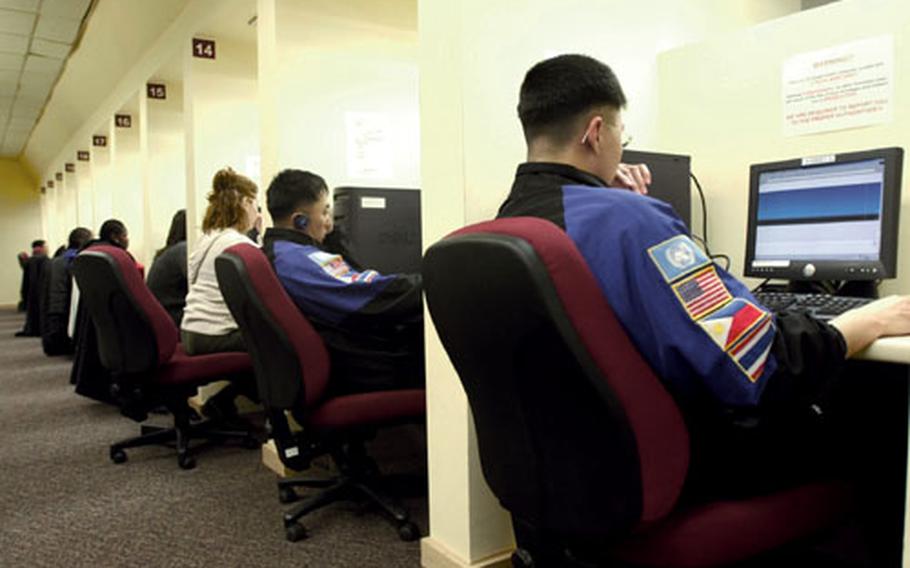 Patrons use new computers installed at Yongsan Garrison&#39;s library as part of numerous improvements made after massive flooding at the facility last August. (Jeremy Kirk / S&S)

YONGSAN GARRISON, South Korea &#8212; The shelves at Yongsan&#8217;s library are growing more crowded by the day.

That&#8217;s because the library has ordered almost 12,000 new items, part of a massive restocking after floodwaters inundated the library late last year. And those items are being used: About 1,000 people visit the building daily and about 1,200 items are circulated, officials said.

About 12 inches of water poured through the front door and eight inches through the back during heavy rains last August. The water destroyed more than 13,000 items, ruining walls and carpeting.

After the flood, mounds of soggy books sat in front of the library. Workers had to determine quickly what was salvageable while deleting the rest from the computer catalog, Kim said.

Then came the fun part: ordering new books. They aren&#8217;t cheap. Fiction and non-fiction books can average from $25 to $30 while reference books can range from $60 to $90 &#8212; even more if they must be purchased in sets such as encyclopedias, Kim said.

Reference librarian Tae Minn said he&#8217;s using specialized published lists of common books carried by libraries to restock. The library also focuses on popular titles and ones most useful for patrons. Minn said he&#8217;s consulting with university professors to see what books may be helpful for students taking particular classes on base.

Not all titles are being replaced one-for-one, as some items may have been out of date or out of print, Kim said.

The facility also has gone from 12 to 25 computers, 22 of which allow public Internet access. Tuesday afternoon, patrons occupied all 22. About 250 people use the computers daily, Minn said.

The remaining three computers are reserved for student research, he said. Those computers have access to databases letting students research magazine articles and other materials.

The library has added a DVD collection, Kim said. Although small, it&#8217;s proving popular, she said. New lights make searching the shelves in the back much easier than before, she said; the walls have been replaced with lighter paint, making the library seem brighter, and the carpeting is new.