After the elections, the struggle continues in Saddam's heartland 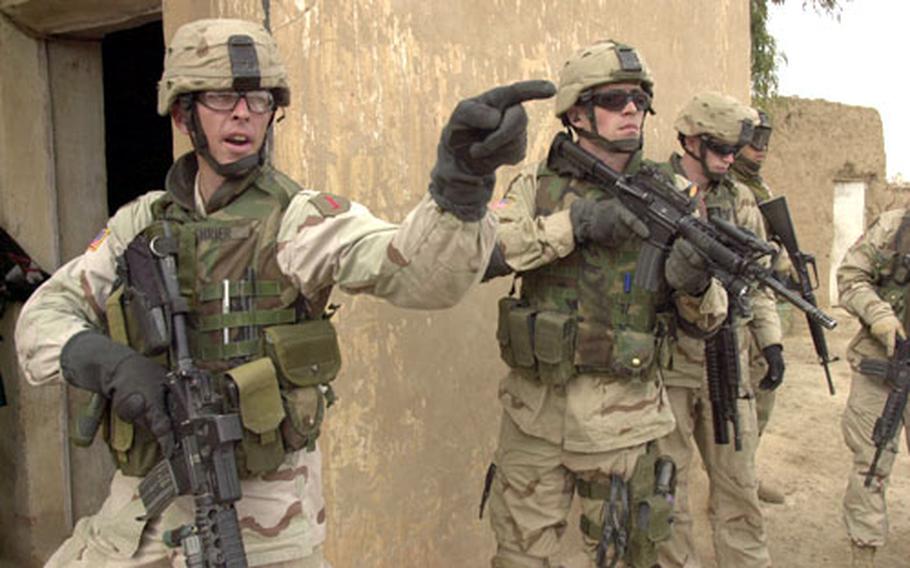 Iraqi elections may be over, but little has changed for 1st Infantry Division troops operating in central Iraq. Staff Sgt. Patrick Shrier from Charlie Troop, 1st Squadron, 4th Cavalry Regiment gets ready to search houses in a tiny village north of Tikrit. Acting on a tip, the unit arrested an arms dealer nearby in January, but found nothing this week on a follow-up search. (Terry Boyd / S&S)

Iraqi elections may be over, but little has changed for 1st Infantry Division troops operating in central Iraq. Staff Sgt. Patrick Shrier from Charlie Troop, 1st Squadron, 4th Cavalry Regiment gets ready to search houses in a tiny village north of Tikrit. Acting on a tip, the unit arrested an arms dealer nearby in January, but found nothing this week on a follow-up search. (Terry Boyd / S&S) 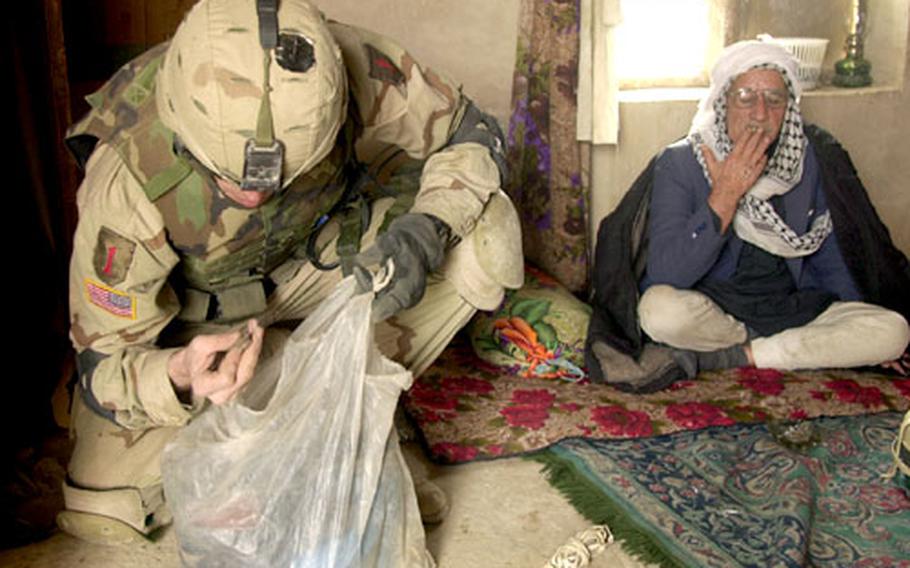 An Iraqi man in the tiny village of Talal Sabot seems indifferent as a Staff Sgt. Kevin White searches the man&#39;s home for weapons. Acting on a tip, the unit arrested an arms dealer nearby in January, but found nothing this week on a follow-up search. (Terry Boyd / S&S) 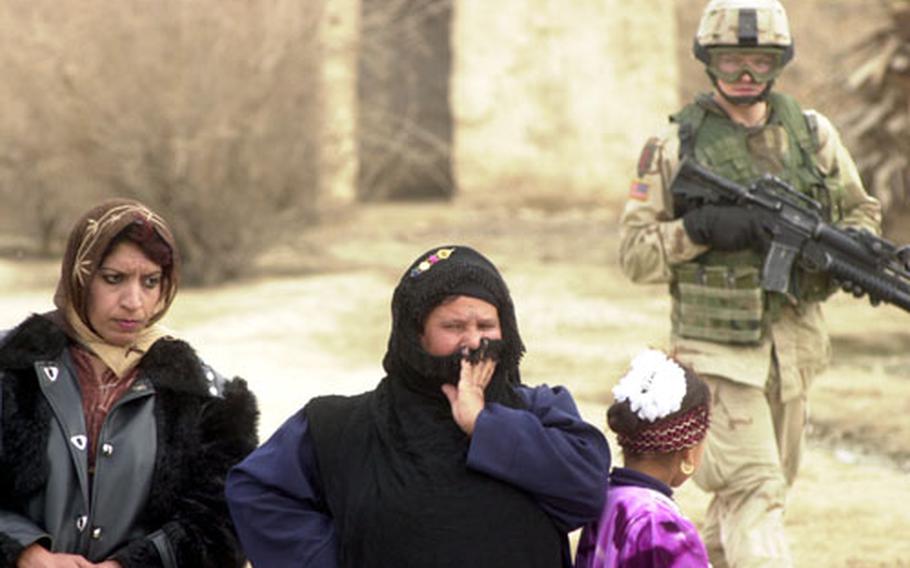 Iraqi women appear tense as they wait for Pfc. Matthew Oberloh, background, and other 1st Infantry Division soldiers to finish searching their home in a tiny village north of Tikrit. (Terry Boyd / S&S)

FORWARD OPERATING BASE WILSON, Iraq &#8212; In the afterglow of the elections, there&#8217;s still a jagged war going on in central Iraq.

But even before the elections, American soldiers already were refining tactics, relying more on the fine art of persuasion and less on crude force.

During their year here, 1st Infantry Division soldiers have achieved myriad small victories in this huge sector, stretching from Saddam&#8217;s hometown of Tikrit north toward Mosul, and east nearly to the Iranian border.

Rocket and mortar attacks have decreased.

In the last few days, a farmer warned U.S. soldiers of a particularly lethal four-artillery-shell bomb on the road to Ad-Dawr.

&#8220;That would have killed somebody,&#8221; said Master Sgt. Steven Zeibarth, noncommissioned officer in charge at Forward Operating Base Wilson, base for elements of the 1st Squadron, 4th U.S. Cavalry Regiment.

&#8220;Our intelligence seems to have been getting better over the last three months,&#8221; said 1st Lt. Ben Butler, who leads Troop C scouts. Iraqi army troops are starting to become a viable force, at least here.

Finally, elections are tangible proof of a drift toward democracy, Zeibarth said: &#8220;Until this point, everything has been U.S. government-driven.&#8221;

It&#8217;s an effort the United States can sustain for only so long.

Before 3rd Infantry Division soldiers from Fort Benning, Ga., replace them, Troop C soldiers still have raids to conduct, local leaders to cultivate and Iraqi police to build up or take down.

During the year they&#8217;ve been here, soldiers and officers have seen more and more Iraqis turning their back on the insurrection in 1-4 Cav&#8217;s huge portion of the Sunni Triangle. But it&#8217;s difficult for soldiers on the ground to appreciate the trend amid daily attacks.

On Monday, a roadside bomb exploded next to a Bradley as it patrolled in Ad-Dawr, just outside FOB Wilson, leaving Staff Sgt. Reginald Graham with a concussion. On Tuesday, somebody tossed a hand grenade at a patrol, slightly wounding Spc. Javier Aigular.

Before he could complete his thought, a deep explosion rocked the base.

Ordnance disposal soldiers were destroying munitions. But half an hour later, in the middle of his dinner, the 31-year-old officer rushed out of the chow hall when medics brought in Aigular.

But they can win only by convincing Iraqis that the better their relationship with American troops and the new government, the better off they&#8217;ll be.

Instead, American soldiers are searching for an antidote to brute force.

One of the most effective seems to be showing locals what the insurgency has wrought.

Last December, roadside bombers in Ad-Dawr missed their intended target, a Bradley, but managed to kill three civilians &#8212; a man, a wife and their friend.

He took photos of the bodies, shredded by a bomb built around a 155 mm artillery shell, Krattiger said.

Just after that attack, guerrillas started hitting Iraqi army positions in Al-Dawr. His troops countered with a midnight ambush, killing one and wounding three, Butler said.

Locals countered that outsiders are causing all the trouble. But all of the insurgents killed in the ambush were from Ad-Dawr, Butler said.

Perhaps 5 percent of the insurgents here are foreign financiers, 5 percent outside trainers, and 90 percent homegrown Saddam loyalists, according to Krattiger.

Days after the election, 1-4 Cav troops are still kicking in doors. But the majority of the day is spent supporting proven police units, Iraqi soldiers and the occasional Iraqi who says &#8220;enough&#8221; to insurgents.

On Tuesday, Butler led a Troop C mission north from FOB Wilson, covering perhaps 100 miles. The mission included everything from talking to Iraqi police in Al-Alam about moving concrete barriers left over from the elections, to doing &#8220;cordon knocks,&#8221; or mini-raids, looking for weapons in Talal Sabot.

About noon, Butler&#8217;s soldiers stop in Al-Alam to check on the Civil Education Center and its founder, Raid Khutab. A privately funded half-way house, the center tries to rehabilitate prisoners freed from Abu Ghraib and Bocce prisons.

Despite the elections, despite the emergence of people such as Raid Khutab, it&#8217;s too simplistic to say things are getting better here, or getting worse, soldiers and officers agreed. Only changing.

&#8220;It&#8217;s a brand new fight for all of us,&#8221; Krattiger said. If there is an emerging trend, it may be that soldiers finally have ordinary Iraqis &#8212; even in this Sunni stronghold &#8212; asking themselves if the only thing insurgents have to offer is more violence.